Some web projects are causing me problems while others work fine. I decided to focus on one of the problematic ones. I'm using Visual Studio 2013 on Windows 7. I think I'm running it as administrator, the window title says PROJECT NAME - Microsoft Visual Studio (Administrator).

When I try to run the project I get a popup saying:

This does not seem entirely uncommon but I have tried many of the suggestions without luck:

If I change the port of the project (e.g. to 55555) it starts... This is not a desirable solution since these projects are worked on by several people. Maybe the port is blocked by something else? If so, is there an easy way to check by what?

Port 62940 seems to be free. Running netstat does not show any application listening to it. Something else must be wrong.

I tried starting the project today after not touching it for a few months. It worked but I don't know why.

I solved the error by changing the port for the project.

I did the following steps:

Yeah, I agree, top answers are really pro solutions. Here is one for intermediates:

The ideal way to sort this out is to use the IIS Express tray icon to stop the web site that is causing the problem. To do this, click the little upward-pointing arrow in the right-hand end of the task bar and right-click the IIS Express icon. This will pop up a small window showing you the web sites that IIS Express is currently running... 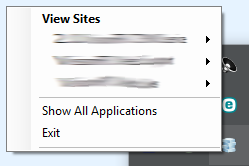 If you click on one of the items under "View Sites" you have the option to stop that site. Or, you can click the Exit item at the bottom of the window to stop all web sites.

That should enable you to debug in Visual Studio. When you start debugging again, IIS Express will automatically restart the web site, and should be able to allocate the port.

If that fails, you have to do it the dirty way. Open Windows Task Manager and kill the Microsoft.VisualStudio.Web.Host.exe*32 process, then you can run the project fine. Note that this will kill IIS Express completely, meaning that all web sites will stop, so you'll have to restart each one in VS if you want to debug any others. Try the pop-up icon method first tough as it's cleaner and safer.

Don't know if this answers your issue, but it works for me.

Update Thanks to JasonCoder (see comment below) for adding that on Win10, the process is Microsoft.VsHub.Server.HttpHost.exe

When using Visual Studio 2015 the solution can be a bit different to the previous answers. VS2015 creates a hidden folder .vs under the same folder as your solution file. Under this is a config folder containing applicationhost.config. Deleting this file (or the entire .vs folder) then starting VS2015 to recreate it can fix this error.

Got this error as well lately. Tried all the above fixes, but none worked.

To disable it, type services.msc in command prompt, then right click and disable Internet Connection Sharing. I edited the properties of it as well to disable at startup. Mine looks like so now: services capture screenshot.

I got the same issue when running my application from Visual Studio 2019 on Windows 10. After some time googling and trying various proposed solutions without success, I determined that the "Access Denied" error was a result of the port number my application uses (50403) falling in an "excluded port range".

You can view the excluded port ranges with the following command:

After some more time googling I found that the two most likely culprits that create these exclusion ranges are Docker and Hyper-V. Docker was not installed on my computer but Hyper-V was.

I added the port I am using to the exclusion list to ensure that I won't get this problem again after reenabling Hyper-V. After Step 4 and 5 when I viewed the excluded port range I can see that Hyper-V reserved a port range starting with the next port after my port.

This happened with me when I was trying to access my site from a remote location:

At first, applicationhost.config (VS2015) contained the standard:

In order to access my site from a remote location within the network, I added (step 1):

Then, I entered into CMD with Admin rights (step 2):

As step 3, I added it a rule to the firewall.

Then, I got this error when trying to run the solution again.

Solution: I seemed to have done everything right, but it did not work until I ran netsh also for the existing localhost rule:

I just had a similar issue. I'm not totally sure how to describe the actual fault but it seems like the hostname in the reservation is incorrect. Try this in an elevated command prompt...

and restart your site. It should work.

I ran into this same error message, but it looks like it was produced from IIS Express. This article helped me resolve it

Run the following command from an Administrative command prompt:

After trying a number of suggested solutions without success I just rebooted my PC. After that the problem didn't occur anymore.

This is the only solution I found

I ended up with cleaning the project file (csproj) and the applicationhost.config (iis express) with all entries regarding iis express configuration. After that, it worked.

If you're having this after installing Visual Studio 2015 and you can see Error messages in System event log such as this: Unable to bind to the underlying transport for [::]:{your_port}. . The IP Listen-Only list may contain a reference ... then you might be missing a registry entry.

I found the solution described in detail here

After all of the steps listed here failed for me I got it working by running VS2015 as administrator.

This happened to me on Windows 10 and VS 2013. Apparently there is a maximum port number IIS Express handles. Ports above 62546 don't work for me.

The error can be solved if you just restart Visual Studio. It has the same effect as restarting the Microsoft.VisualStudio.Web.Host.exe*32 process.

Got the same issue where IIS express complained about http://localhost:50418/ and none of above solutions worked for me..

In the tag <sites> I found that my web app had two bindnings registered.

Removing the binding pointing to *:50418:localhost solved the issue.

My issue turned out to be that I had SSL Enabled on the project settings. I simply disabled this because I did not require SSL for running the project locally.

In my situation I was getting an error about port 443 in use because this was the port set on the SSL URL for the project.

Running netstat -abn I noticed that the software "Duet Display" was reserving thousands of ports in the ~51000 range.

Closing it solved my problem.

Sometimes this error my be another Visual Studio version running on the same machine.

Go to the project "Properties" => "Web", and on the "Servers" section change the port to something else that is not used in and save it. You will be asked to created a virtual directory and click "Yes". Now run the project and it will work now.

In my case it worked at first and after a while stopped working and IIS Express reported that the port was in use.
netstat -ab showed that Chrome was using the port. After I quit Chrome, it started working again.
I am not sure however, why Chrome would occupy that port.

This happened to me on Windows 7 and VS 2013 while viewing a project on the browser after build. I only had to close the browser "Chrome" then made sure that the port is not in use in my Network Activities using some utility (Kaspersky) then tried again and worked without any problems.

I write it for information.

Delete the file in the project.

I solved this issue by killing all instances of iexplorer and iexplorer*32. It looks like Internet Explorer was still in memory holding the port open even though the application window was closed.

I had this issue with JetBrains Rider, specifically for port 80 and 90 bit it was working with other ports as well as visual studio.

after running as admin this resolved the issue.

What worked for me is disabling all other network adapters, except the one I'm currently using. The event in event viewer was: Unable to bind to the underlying transport for [::]:50064. The IP Listen-Only list may contain a reference to an interface which may not exist on this machine. The data field contains the error number.

Since I have VMware Workstation, Docker (and thus Hyper V) some VPN clients, I have a lot of network interfaces.

Not the answer you're looking for? Browse other questions tagged asp.net visual-studio port iis-express or ask your own question.