Why does PyCharm propose to change method to static?

The new pycharm release (3.1.3 community edition) proposes to convert the methods that don't work with the current object's state to static. 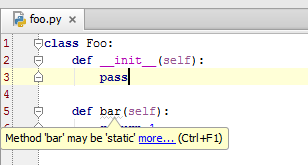 What is the practical reason for that? Some kind of micro-performance(-or-memory)-optimization?

PyCharm "thinks" that you might have wanted to have a static method, but you forgot to declare it to be static (using the @staticmethod decorator).

Agreed with @jolvi, @ArundasR, and others, the warning happens on a member function that doesn't use self.

If you're sure PyCharm is wrong, that the function should not be a @staticmethod, and if you value zero warnings, you can make this one go away two different ways:

The application I had for this (the reason I could not use @staticmethod) was in making a table of handler functions for responding to a protocol subtype field. All handlers had to be the same form of course (static or nonstatic). But some didn't happen to do anything with the instance. If I made those static I'd get "TypeError: 'staticmethod' object is not callable".

In support of the OP's consternation, suggesting you add staticmethod whenever you can, goes against the principle that it's easier to make code less restrictive later, than to make it more -- making a method static makes it less restrictive now, in that you can call class.f() instead of instance.f().

Guesses as to why this warning exists:

I think that the reason for this warning is config in Pycharm. You can uncheck the selection Method may be static in Editor->Inspection

I agree with the answers given here (method does not use self and therefore could be decorated with @staticmethod).

Moving the method to a top-level function will fix the PyCharm warning, too.

I can imagine following advantages of having a class method defined as static one:

remaining advantages are probably marginal if present at all:

It might be a bit messy, but sometimes you just don't need to access self, but you would prefer to keep the method in the class and not make it static. Or you just want to avoid adding a bunch of unsightly decorators. Here are some potential workarounds for that situation.

If your method only has side effects and you don't care about what it returns:

If you do need the return value:

Now your method is using self, and the warning goes away!

Since you didn't refer to self in the bar method body, PyCharm is asking if you might have wanted to make bar static. In other programming languages, like Java, there are obvious reasons for declaring a static method. In Python, the only real benefit to a static method (AFIK) is being able to call it without an instance of the class. However, if that's your only reason, you're probably better off going with a top-level function - as note here.

In short, I'm not one hundred percent sure why it's there. I'm guessing they'll probably remove it in an upcoming release.

This error message just helped me a bunch, as I hadn't realized that I'd accidentally written my function using my testing example player

instead of the correct way

The reason why Pycharm make it as a warning because Python will pass self as the first argument when calling a none static method (not add @staticmethod). Pycharm knows it.

I'm from Java, in Java "self" is called "this", you don't need write self(or this) as argument in class method. You can just call self as you need inside the method. But Python "has to" pass self as a method argument.

By understanding this you don't need any Workaround as @BobStein answer.

Rather than implementing another method just to work around this error in a particular IDE, does the following make sense? PyCharm doesn't suggest anything with this implementation.

Not the answer you're looking for? Browse other questions tagged python pycharm static-methods or ask your own question.

1913
Static methods in Python?
42
python - should I use static methods or top-level functions
29
Private Methods Over Public Methods
2
@staticmethod for simple class methods suggested
-2
What is the correct way to update an element in elements list?
1
Python explicitly calling self in class method