JavaScript - Nuances of myArray.forEach vs for loop

for arrays, due to inconsistent iteration (see here).

However, I can't seem to find anything that seems to prefer the object oriented loop:

Which seems way more intuitive to me.

For my current project, IE8 compatibilty is important, and I'm considering using Mozilla's polyfill, however I'm not 100% sure how this will work.

The most substantive difference between the for loop and the forEach method is that, with the former, you may break out of the loop. You can simulate continue by simply returning from the function passed to forEach, but there is no way to stop looping altogether.

Aside from that, the two accomplish effectively the same functionality. Another minor difference involves the scope of the index (and all containing variables) in the for loop, due to variable hoisting.

However, I find that forEach is much more expressive—it represents your intent to iterate through each element of an array, and it provides you with a reference to the element, not just the index. Overall, it mostly comes down to personal taste, but if you can use forEach, I would recommend using it.

There are a few more substantial differences between the two versions, specifically regarding performance. In fact, the simple for loop performs considerably better than the forEach method, as demonstrated by this jsperf test.

Whether or not such performance is necessary for you is up to you to decide, and in most cases, I would favor expressiveness over speed. This speed difference is likely due to the minor semantic differences between the basic loop and the method when operating on sparse arrays, as noted in this answer.

If you don't need the behavior of forEach and/or you need to break out of the loop early, you can use Lo-Dash's _.each as an alternative, which will also work cross-browser. If you're using jQuery, it also provides a similar $.each, just note the differences in arguments passed to the callback function in each variation.

(As for the forEach polyfill, it should work in older browsers without problems, if you choose to go that route.)

You can use your custom foreach function which will perform much better then Array.forEach

You should add this once to your code. This will add new function to the Array.

Then you can use it anywhere like the Array.forEach

The only difference it is 3 times faster. https://jsperf.com/native-arr-foreach-vs-custom-foreach

UPDATE: In new Chrome version the performance of .forEach() was improved. However, the solution can give the additional performance in other browsers. 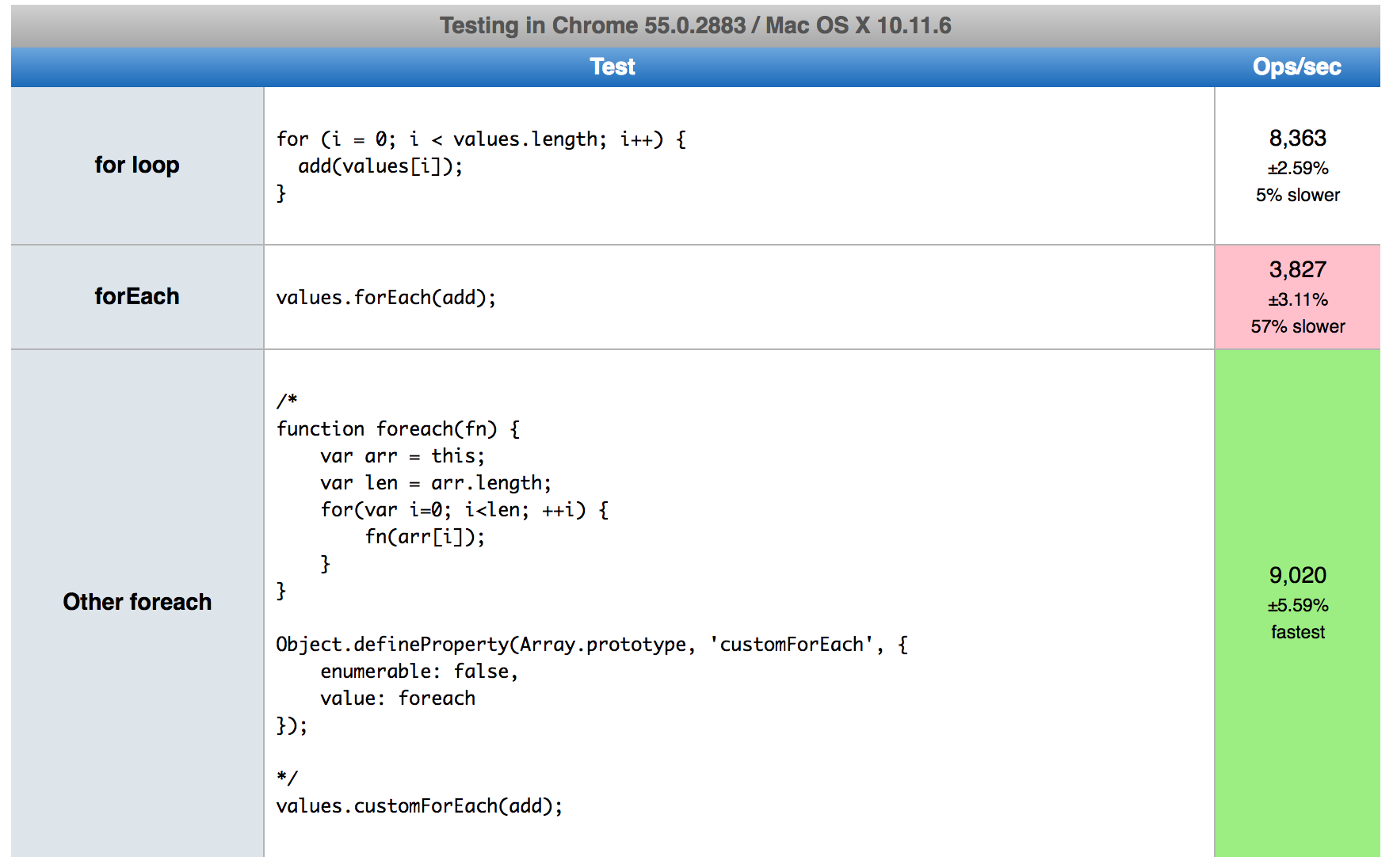 It is suggested by many developers (e.g. Kyle Simpson) to use .forEach to indicate that the array will have a side effect and .map for pure functions. for loops fit well as a general-purpose solution for known number of loops or any other case that doesn't fit as it is easier to communicate because of its broad support across the majority of programming languages.

Convention wise, this seems best, however the community hasn't really settled on a convention on the newer iteration protocol for in loops. Generally, I think it's a good idea to follow the FP concepts that the JS community seems to be open to adopting.

Not the answer you're looking for? Browse other questions tagged javascript arrays for-loop internet-explorer-8 iterator or ask your own question.

0
Is forEach equivalent exactly to a for loop?
0
What are the advantages of using forEach vs for?
467
JavaScript for...in vs for
79
Why is lodash.each faster than native forEach?
26
Terse way to intersperse element between all elements in JavaScript array?
6
How to stop looping once it found?
6
Javascript: for..in loop running more number of times than expected
1
How to dropdown or hide and show submenu with EventListener in javascript?