Say a have a div, and that I rounded its corners so it became a circle. Now, I want to apply the :hover pseudo-element to it. But I have other elements surrounding it, which in turn have :hover effects themselves. I only want the hover effect of the circle to activate if the mouse is effectively inside the circle.

To illustrate this problem: 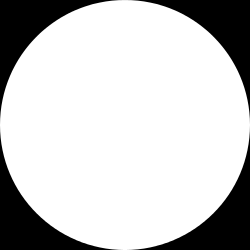 The square was my div, and the circle how it looked after rounding its corners. Pretend that the black areas are in front of other elements, whose :hover effect I also want to be able to use. If I apply the hover pseudo-element to the circle, when the mouse is in a black zone, the circle's hover effect will be activated, and not the one of the element behind the div...

How to (if it can be done) solve this problem?

I did a little test on the latest versions of Chrome, Opera, Firefox, IE and Safari; besides Opera*, the browsers seem to work as you would wish.

Opera doesn't, and that's due to faulty browser implementation, and should be filed as a bug. The specs are pretty clear on this point:

Also, the area outside the curve of the border edge does not accept pointer events on behalf of the element.

P.S. (The :hover is a pseudo-class, not a pseudo-element)

If you are able to use SVG your element will be whatever you define it to be, and it's bounded by the border shape/size of your of your specs. So in your case a circle you can do something like this:

and then style it with css:

Not the answer you're looking for? Browse other questions tagged html css hover rounded-corners or ask your own question.