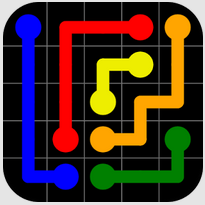 Connect matching colors with pipe to create a flow. Pair all colors, and cover the entire board to solve each puzzle in Flow Free. But watch out, pipes will break if they cross or overlap!

I realized it is just path finding game between given pair of points with conditions that no two paths overlap. I was interested in writing a solution for the game but don't know where to start. I thought of using backtracking but for very large board sizes it will have high time complexity.

Is there any suitable algorithm to solve the game efficiently. Can using heuristics to solve the problem help? Just give me a hint on where to start, I will take it from there.

I observed in most of the boards that usually

Is this correct observation and can it be used to solve it efficiently?

The problem is obviously in NP: If you guess a board constellation, it is easy (poly-time) to check whether it solves the problem.

Whether it is NP-hard (meaning as hard as every other problem in NP, e.g. SAT), is not clear. Surely modern SAT solvers will not care and solve large instances in a breeze anyway (I guess up to 100x100).

Here I just copy Nuclearman's comment to the OP:

Searching for "SAT formulation of numberlink" and "NP-completeness of numberlink" leads to a couple references. Unsurprisingly, the two most interesting ones are in Japanese. The first is the actual paper proof of NP-completeness. The second describes how to solve NumberLink using the SAT solver, Sugar. –

Hint for reduction to SAT

There are several possibilities to encode the problem. I'll give one that I could make up quickly.

j_random_hacker noted that free-standing cycles are not allowed. The following encoding does allow them. This problem makes the SAT encoding a bit less attractive. The simplest method I could think of to forbid free-standing loops would introduce O(n^2) new variables, where n is the number of tiles on the board (count distance from next sink for each tile) unless one uses log encoding for this, which would bring it down to O(n*log n), possible making the problem harder for the solver.

One variable per tile, piece type and color. Example if some variable X-Y-T-C is true it encodes that the tile at position X/Y is of type T and has color C. You don't need the empty tile type since this cannot happen in a solution.

I might have missed something. But it should be easily fixed.

I suspect that no polynomial-time algorithm is guaranteed to solve every instance of this problem. But since one of the requirements is that every square must be covered by pipe, a similar approach to what both people and computers use for solving Sudoku should work well here:

When picking a square to branch on, it's generally a good idea to pick a square with as few allowed colours as possible.

[EDIT: It's important to avoid the possibility of forming invalid "loops" of pipe. One way to do this is by maintaining, for each allowed colour i of each square x, 2 bits of information: whether the square x is connected by a path of definite i-coloured tiles to the first i-coloured endpoint, and the same thing for the second i-coloured endpoint. Then when recursing, don't ever pick a square that has two neighbours with the same bit set (or with neither bit set) for any allowed colour.]

You actually don't need to use any logical deductions at all, but the more and better deductions you use, the faster the program will run as they will (possibly dramatically) reduce the amount of recursion. Some useful deductions include:

More advanced deductions based on path connectivity might help further -- e.g. if you can determine that every path connecting some pair of connectors must pass through a particular square, you can immediately assign that colour to the square.

I found a blog post on Needlessly Complex that completely explains how to use SAT to solve this problem.

The code is open-source as well, so you can look at it (and understand it) in action.

I'll provide a quote from it here that describes the rules you need to implement in SAT:

Thank you @Matt Zucker for creating this!

I like solutions that are similar to human thinking. You can (pretty easily) get the answer of a Sudoku by brute force, but it's more useful to get a path you could have followed to solve the puzzle.

I observed in most of the boards that usually 1.For furthest points, you need to follow path along edge. 2.For point nearest to each other, follow direct path if there is one. Is this correct observation and can it be used to solve it efficiently?

These are true "most of the times", but not always.

I would replace your first rule by this one : if both sinks are along edge, you need to follow path along edge. (You could build a counter-example, but it's true most of the times). After you make a path along the edge, the blocks along the edge should be considered part of the edge, so your algorithm will try to follow the new edge made by the previous pipe. I hope this sentence makes sense...

Of course, before using those "most of the times" rules, you need to follow absolutes rules (see the two deductions from j_random_hacker's post).

Another thing is to try to eliminate boards that can't lead to a solution. Let's call an unfinished pipe (one that starts from a sink but does not yet reach the other sink) a snake, and the last square of the unfinished pipe will be called the snake's head. If you can't find a path of blank squares between the two heads of the same color, it means your board can't lead to a solution and should be discarded (or you need to backtrack, depending of your implementation).

The free flow game (and other similar games) accept as a valid solution a board where there are two lines of the same color side-by-side, but I believe that there always exists a solution without side-by-side lines. That would mean that any square that is not a sink would have exactly two neighbors of the same color, and sinks would have exactly one. If the rule happens to be always true (I believe it is, but can't prove it), that would be an additional constraint to decrease your number of possibilities. I solved some of Free Flow's puzzles using side-by-side lines, but most of the times I found another solution without them. I haven't seen side-by-side lines on Free Flow's solutions web site.

A few rules that lead to a sort of algorithm to solve levels in flow, based on the IOS vertions by Big Duck Games, this company seems to produce the canonical versions. The rest of this answer assumes no walls, bridges or warps.

Even if your uncannily good, the huge 15x18 square boards are a good example of how just going at it in ways that seem likely get you stuck just before the end over and over again and practically having to start again from scratch. This is probably to do with the already mentioned exponential time complexity in the general case. But this doesn’t mean that a simple stratergy isn’t overwhelmingly effective for most boards.

Most if not all 3rd party variants I’ve found lack 1 to 4, but given these restraints generating valid boards may be a difficult task.

Point 3 suggests a value be stored for each cell that is able to be either a colour, or a set of false/indeterminate values there being one for each colour.

A solver could repeatedly use points 1 and 2 along with the data stored for point 3 on small neighbourhoods of paths around the ends of pipes to increasingly set colours or set the indeterminate values to false.

A few of us have spent quite a bit of time thinking about this. I summarised our work in a Medium article here: https://towardsdatascience.com/deep-learning-vs-puzzle-games-e996feb76162

Not the answer you're looking for? Browse other questions tagged algorithm graph artificial-intelligence or ask your own question.

-1
Algorithm for solving "Pipes" Game
9
How to find all vertex-disjoint paths in a graph?
11
Logic to strategically place items in a container with minimum overlapping connections
1
Numberlink/Flow Game: How to spot NP-Complete problems?

1558
What is the best algorithm for overriding GetHashCode?
1161
Ukkonen's suffix tree algorithm in plain English
1768
Image Processing: Algorithm Improvement for 'Coca-Cola Can' Recognition
976
How to find time complexity of an algorithm
15
Is there a well known algorithm fill in the grid given a set of points?
282
Representing and solving a maze given an image
3
Flood It game Algorithm
4
Lights out game algorithm
1985
What is the optimal algorithm for the game 2048?