Why is my variable unaltered after I modify it inside of a function? - Asynchronous code reference

Given the following examples, why is outerScopeVar undefined in all cases?

Why does it output undefined in all of these examples? I don't want workarounds, I want to know why this is happening.

Note: This is a canonical question for JavaScript asynchronicity. Feel free to improve this question and add more simplified examples which the community can identify with.

This topic has been iterated at least a couple of thousands of times, here, in Stack Overflow. Hence, first off I'd like to point out some extremely useful resources:

The answer to the question at hand

Let's trace the common behavior first. In all examples, the outerScopeVar is modified inside of a function. That function is clearly not executed immediately, it is being assigned or passed as an argument. That is what we call a callback.

Now the question is, when is that callback called?

It depends on the case. Let's try to trace some common behavior again:

More specifically, when the JS engine is idle -- not executing a stack of (a)synchronous code -- it will poll for events that may have triggered asynchronous callbacks (e.g. expired timeout, received network response) and execute them one after another. This is regarded as Event Loop.

That is, the asynchronous code highlighted in the hand-drawn red shapes may execute only after all the remaining synchronous code in their respective code blocks have executed: 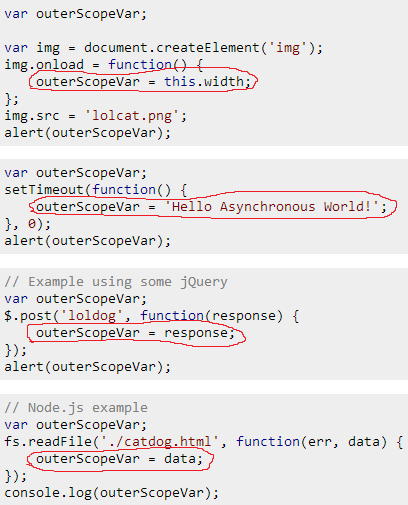 In short, the callback functions are created synchronously but executed asynchronously. You just can't rely on the execution of an asynchronous function until you know it has executed, and how to do that?

It is simple, really. The logic that depends on the asynchronous function execution should be started/called from inside this asynchronous function. For example, moving the alerts and console.logs too inside the callback function would output the expected result, because the result is available at that point.

Implementing your own callback logic

Note: I'm using setTimeout with a random delay as a generic asynchronous function, the same example applies to Ajax, readFile, onload and any other asynchronous flow.

This example clearly suffers from the same issue as the other examples, it is not waiting until the asynchronous function executes.

Let's tackle it implementing a callback system of our own. First off, we get rid of that ugly outerScopeVar which is completely useless in this case. Then we add a parameter which accepts a function argument, our callback. When the asynchronous operation finishes, we call this callback passing the result. The implementation (please read the comments in order):

Code snippet of the above example:

Most often in real use cases, the DOM API and most libraries already provide the callback functionality (the helloCatAsync implementation in this demonstrative example). You only need to pass the callback function and understand that it will execute out of the synchronous flow, and restructure your code to accommodate for that.

Instead of returning a value from an asynchronous callback, you will have to make use of the callback pattern, or... Promises.

Although there are ways to keep the callback hell at bay with vanilla JS, promises are growing in popularity and are currently being standardized in ES6 (see Promise - MDN).

Promises (a.k.a. Futures) provide a more linear, and thus pleasant, reading of the asynchronous code, but explaining their entire functionality is out of the scope of this question. Instead, I'll leave these excellent resources for the interested:

Note: I've marked this answer as Community Wiki, hence anyone with at least 100 reputations can edit and improve it! Please feel free to improve this answer, or submit a completely new answer if you'd like as well.

I want to turn this question into a canonical topic to answer asynchronicity issues which are unrelated to Ajax (there is How to return the response from an AJAX call? for that), hence this topic needs your help to be as good and helpful as possible!

Fabrício's answer is spot on; but I wanted to complement his answer with something less technical, which focusses on an analogy to help explain the concept of asynchronicity.

Yesterday, the work I was doing required some information from a colleague. I rang him up; here's how the conversation went:

Me: Hi Bob, I need to know how we foo'd the bar'd last week. Jim wants a report on it, and you're the only one who knows the details about it.

Me: That's great Bob. Give me a ring back when you've got the information!

Imagine if the conversation had gone like this instead;

Me: Hi Bob, I need to know how we foo'd the bar'd last week. Jim want's a report on it, and you're the only one who knows the details about it.

This is exactly what is happening in all the examples in our question. Loading an image, loading a file off disk, and requesting a page via AJAX are all slow operations (in the context of modern computing).

In the code above, we're asking JavaScript to load lolcat.png, which is a sloooow operation. The callback function will be executed once this slow operation has done, but in the meantime, JavaScript will keep processing the next lines of code; i.e. alert(outerScopeVar).

This is why we see the alert showing undefined; since the alert() is processed immediately, rather than after the image has been loaded.

In order to fix our code, all we have to do is move the alert(outerScopeVar) code into the callback function. As a consequence of this, we no longer need the outerScopeVar variable declared as a global variable.

You'll always see a callback is specified as a function, because that's the only* way in JavaScript to define some code, but not execute it until later.

Therefore, in all of our examples, the function() { /* Do something */ } is the callback; to fix all the examples, all we have to do is move the code which needs the response of the operation into there!

* Technically you can use eval() as well, but eval() is evil for this purpose

How do I keep my caller waiting?

You might currently have some code similar to this;

However, we now know that the return outerScopeVar happens immediately; before the onload callback function has updated the variable. This leads to getWidthOfImage() returning undefined, and undefined being alerted.

To fix this, we need to allow the function calling getWidthOfImage() to register a callback, then move the alert'ing of the width to be within that callback;

... as before, note that we've been able to remove the global variables (in this case width).

Here's a more concise answer for people that are looking for a quick reference as well as some examples using promises and async/await.

Start with the naive approach (that doesn't work) for a function that calls an asynchronous method (in this case setTimeout) and returns a message:

undefined gets logged in this case because getMessage returns before the setTimeout callback is called and updates outerScopeVar.

The two main ways to solve it are using callbacks and promises:

The change here is that getMessage accepts a callback parameter that will be called to deliver the results back to the calling code once available.

Promises provide an alternative which is more flexible than callbacks because they can be naturally combined to coordinate multiple async operations. A Promises/A+ standard implementation is natively provided in node.js (0.12+) and many current browsers, but is also implemented in libraries like Bluebird and Q.

jQuery provides functionality that's similar to promises with its Deferreds.

If your JavaScript environment includes support for async and await (like Node.js 7.6+), then you can use promises synchronously within async functions:

To state the obvious, the cup represents outerScopeVar. 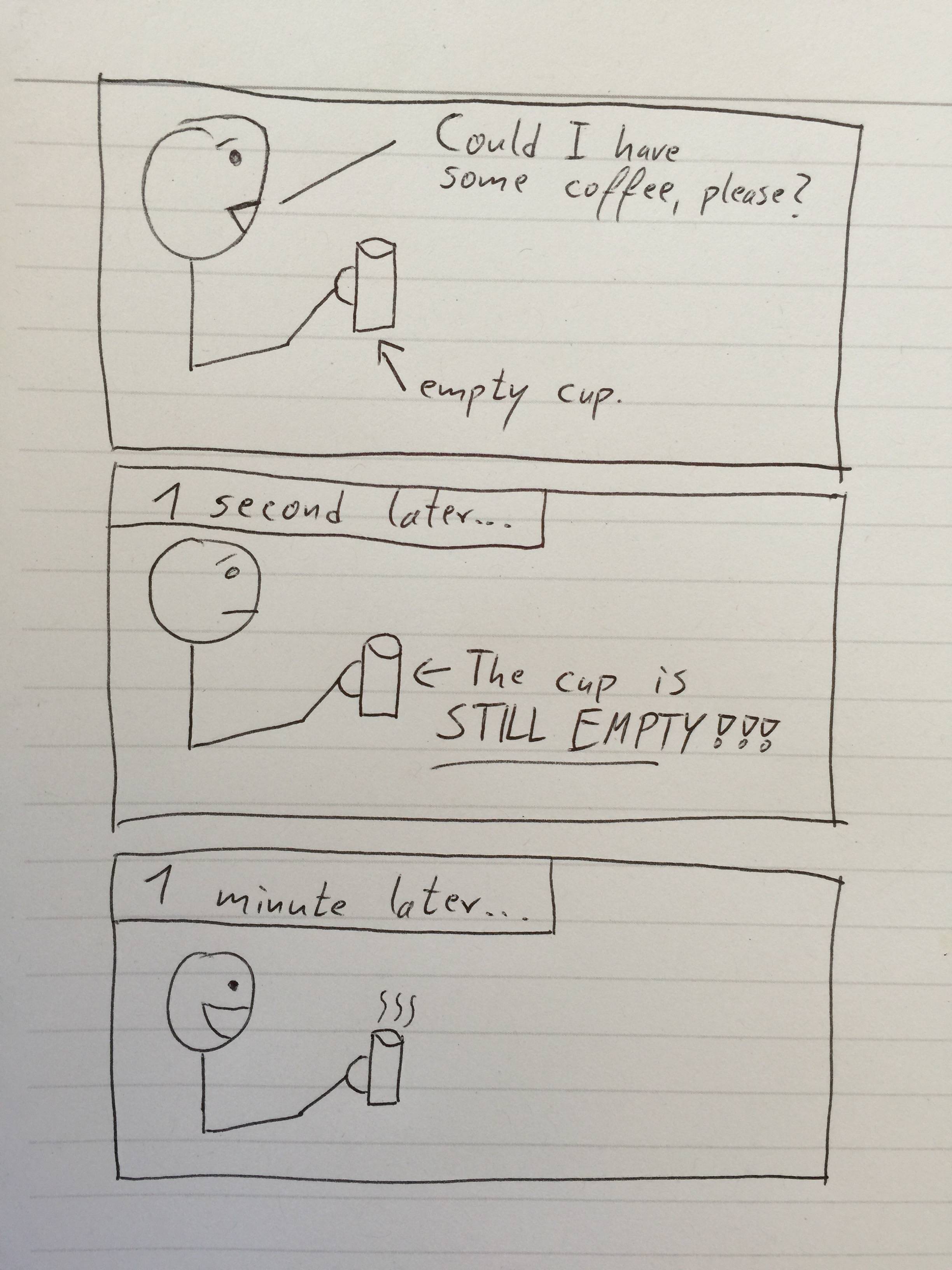 The other answers are excellent and I just want to provide a straight forward answer to this. Just limiting to jQuery asynchronous calls

All ajax calls (including the $.get or $.post or $.ajax) are asynchronous.

Lets say that the post request takes 10 seconds to complete, the value of outerScopeVar will only be set after those 10 seconds.

Now when you execute this, you would get an alert on line 3. Now wait for some time until you are sure the post request has returned some value. Then when you click OK, on the alert box, next alert would print the expected value, because you waited for it.

Let's discuss each examples(I marked the portion which is called asynchronously or delayed for some events to occur):

Here we register an eventlistner which will be executed upon that particular event.Here loading of image.Then the current execution continuous with next lines img.src = 'lolcat.png'; and alert(outerScopeVar); meanwhile the event may not occur. i.e, funtion img.onload wait for the referred image to load, asynchrously. This will happen all the folowing example- the event may differ.

Here the timeout event plays the role, which will invoke the handler after the specified time. Here it is 0, but still it registers an asynchronous event it will be added to the last position of the Event Queue for execution, which makes the guaranteed delay.

Node can be consider as a king of asynchronous coding.Here the marked function is registered as a callback handler which will be executed after reading the specified file.

Obvious promise (something will be done in future) is asynchronous. see What are the differences between Deferred, Promise and Future in JavaScript?

Not the answer you're looking for? Browse other questions tagged javascript asynchronous or ask your own question.

53
chrome.storage.local.get and set
9
Foreach callback when finish
3
Node.js MongoDB collection.find().toArray returns nothing
2
Get array value from AJAX request
6
Variables are not being set inside the .then() part of a Promise
4
Set value of global variable inside async function or inside promise?
4
Variable in parent scope not getting altered in anonymous function
4
bcrypt.compare() is asynchronous, does that necessarily mean that delays are certain to happen?
2
How do I call chrome.storage.sync.get and assign variables on page load?
3
Why my global varibale do not override after post request
See more linked questions

288
Why should I use a semicolon after every function in javascript?
2
KineticJS dragBoundFunc not working
2
accessing cache pictures phonegap
0
After adding callback function, why is my variable modified inside it unaltered?
0
$http success callback in factory not running when there's an infinite loop in run block
166
Why is my asynchronous function returning Promise { <pending> } instead of a value?
0
Asynchronous function inside asynchronous function
3
Promises - How to make asynchronous code execute synchronous without async / await?
158
Why do some variables declared using let inside a function become available in another function, while others result in a reference error?