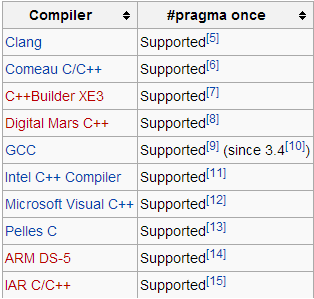 #pragma once is not standard. It is a widespread (but not universal) extension, which can be used

It was considered for standardization, but rejected because it cannot be implemented reliably. (The problems occur when you have files accessible through several different remote mounts.)

It's fairly easy to ensure that there are no include guard conflicts within a single development. For libraries, which may be used by many different developments, the obvious solution is to generate a lot of random characters for the include guard when you create it. (A good editor can be set up to do this for you whenever you open a new header.) But even without this, I've yet to encounter any problems with conflicts between libraries.

A preprocessing directive of the form

Basically #pragma once is an implementation specific instance of a #pragma directive, and no, it's not standard. Yet.

It is often widely supported by most "major compilers" including GCC and Clang and is therefore sometimes recommended to avoid include-guards boilerplate.

Not the answer you're looking for? Browse other questions tagged c++ c++11 macros header-files c++14 or ask your own question.

394
Is #pragma once a safe include guard?
222
Separating class code into a header and cpp file
82
Why isn't #pragma once automatically assumed?
73
The use of double include guards in C++
58
Why isn't C/C++'s "#pragma once" an ISO standard?
27
#pragma once position: before or after #include's
7
Internal vs External Include Guards
3
Since other abusable but useful features have been standardized, why not #pragma once?
1
C++ Separate header and source file
1
C++ how to extend a class and cast to appropriate type with same name
See more linked questions

2882
What is the difference between #include <filename> and #include "filename"?
3741
What are the differences between a pointer variable and a reference variable?
3450
What does the explicit keyword mean?
3273
How do I iterate over the words of a string?
4232
The Definitive C++ Book Guide and List
58
Why isn't C/C++'s "#pragma once" an ISO standard?
2413
What is The Rule of Three?
2378
What are the basic rules and idioms for operator overloading?
1820
Why should I use a pointer rather than the object itself?