I have a flexbox layout containing two items. One of them uses padding-bottom :

The blue element maintains its aspect ratio according to its width when the page is resized. This works with Chrome and IE and looks like : 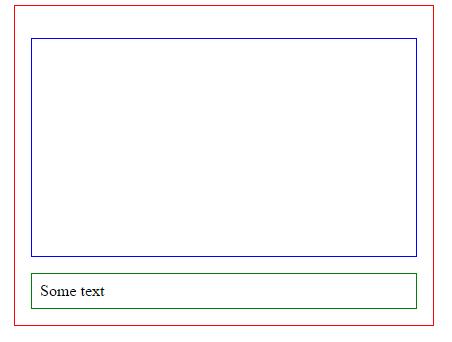 However, in Firefox and Edge, I get the following (it's ignoring the padding on the blue box, which is what maintains the aspect ratio):

I'm too new to flexbox to really understand if this should or shouldn't work. The whole point of flexbox is to resize things, but I'm not sure why it is ignoring the intrinsic padding, and putting absolute sizes on the blue element.

I guess ultimately I'm not even sure if Firefox or Chrome is doing the correct thing! Can any Firefox flexbox experts help?

Firefox and edge have implemented the behaviour from the specs and margin + padding for flex elements are both calculated according to the width of the containing block.
Just like block elements.

Firefox and edge have agreed to change their behaviour on top, bottom margin and padding for flex (and grid) items :

The specs have been updated to:

Percentage margins and paddings on flex items can be resolved against either:

This means that chrome IE FF and Edge (even if they don't have the same behaviour) follow the specs recommendation.

Authors should avoid using percentages in paddings or margins on flex items entirely, as they will get different behavior in different browsers. [source]

You can wrap the first child of the flex container in an other element and put the padding-bottom on the second child :

I tested this in modern browsers (IE, chrome, FF and Edge) and they all have the same behaviour. As the configuration of the 2nd child is the "same as usual", I suppose that older browsers (that also support flexbox layout module) will render the same layout.

According to the specs, Firefox has the right behaviour

Unlike block items which calculate their % margin/padding according to the containers width, on flex items:

This means that padding-bottom/top and margin-bottom/top are calculated according to the height of the container and not the width like in non-flexbox layouts.

As you have not specified any height on the parent flex item, the bottom padding of the child is supposed to be 0px.

Here is a fiddle with a fixed height on the parent that shows that padding bottom is calculated according to the height of the display:flex; container.

The accepted answer is correct but I improved on the solution by using a pseudo-element instead of adding a new element in to the HTML.

I used vh instead of % worked perfectly in Safari, Firefox & Edge

0
CSS Flexbox bug with Firefox
1344
Maintain the aspect ratio of a div with CSS
16
Use flexbox and maintain an aspect ratio even though content is sized differently
13
Flexbox padding bottom fails in Firefox and Safari
3
How is padding calculated when using percentage (%)?
4
CSS - Responsive grid with equal margins and fixed size blocks
0
What does % height in css mean
1
Microsoft Edge Flexbox padding behavior
-2
Flex inside flex doesent work in Firefox 38
0
Flexbox with vertical margin/padding percentage in Firefox broken
See more linked questions

1358
How to align content of a div to the bottom
758
How can I make Flexbox children 100% height of their parent?
223
Absolute positioning ignoring padding of parent
894
Flexbox: center horizontally and vertically
1263
Better way to set distance between flexbox items
312
Fill remaining vertical space with CSS using display:flex
600
Align an element to bottom with flexbox
992
In CSS Flexbox, why are there no "justify-items" and "justify-self" properties?