Following the example of plotting a term-document matrix below,

Is there a way to colorize the nodes based on how many vertices they have? Is there an example of making the nodes with more vertices larger or something to that effect as well?

I appears that the nodes that end up being plotted are of the class AgNode. The properties that you can set of the AgNode are listed on the ?AgNode help page. Once you know what properties you would like to set, you can pass a list to a nodeAttrs parameter to your plotting command. (EDIT: actually a better list is probably the node attributes description in the Rgraphviz documentation)

The nodeAttrs parameter take a list where each named element of that list corresponds to one of the properties of AgNode. At each position, you store a named vector where the name of the vector corresponds to the node name (ie the word in your term matrix) and the value represents the value for that attribute. For example

So when you wanted to color the terms by the number of vertexes they have, i'm going to assume you mean edges as each word is a single vertex in the graph. So, using your tdm object

I save the terms you wanted, and then I basically copied the code inside the plot command to calculate the correlations with your cutoff of 0.5 to see how many other words each word in this subset is connected to. That's the vtxcnt variable. (There may be a more efficient way to extract this but I could not find it). Now I'm ready to assign colors

Here I grabbed some colors from ColorBrewer. I have 8 values because the values of vtxcnt range from 0-8. If you had a wider range or wanted to collapsed categories, you could use the cut() command to categorize them. Then I created a named vector vc that matches up each word to the appropriate color. vc should look like this

And now we are ready to make the plot

So as you can see the customizing of nodes is pretty flexible. You can color them how every you like if you pass the correct values to nodeAttrs. 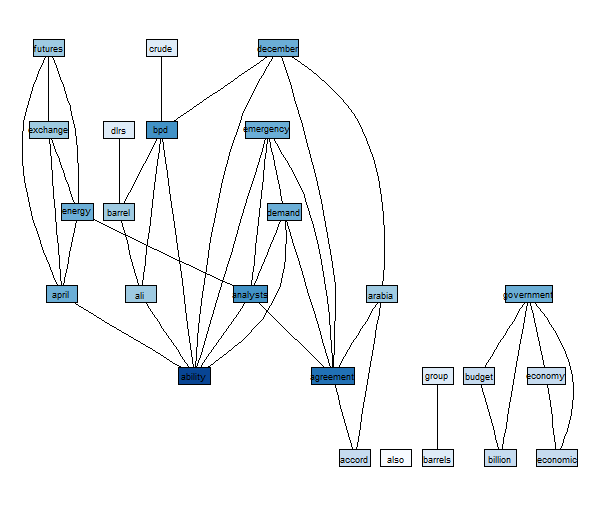 596
Plot two graphs in same plot in R
2
package tm. problems with kmeans
1
Making a term document matrix from an excel file using R
778
data.table vs dplyr: can one do something well the other can't or does poorly?
1
Lists of term-frequency pairs into a matrix in R
0
R tm/qdap - Get document based on term
10
Keep document ID with R corpus
2
In R plotting keyword / word associations (findAssocs) with igraph on tdm or dtm in R?
0
How to change language of termDocumentmatrix in R text-mining?