I am building system and trying to decide between Voters and ACL. What I need to achieve is there should be users with different roles to access object properties, for example: A regular authenticated user could see Post and it contents but not it's "Position" attribute, and User with editor role could also see the Post and it's contents, and have permision to see "Position" attribute and edit it. Can I achieve this functionality by using voters alone, or I need to use ACL?

I'm sorry for confusing question, I'm new to symfony and don't quite yet understand those concepts. What I wan't to achieve is permissions in object field level. 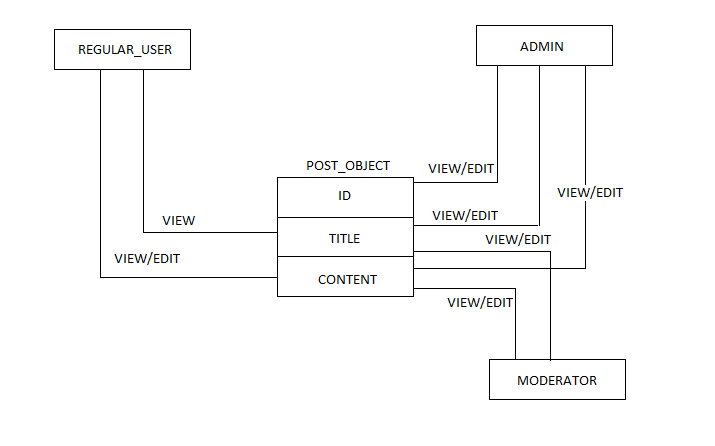 The docs only explain how to check access on objects rather than properties. I'll explain the decisions I make when choosing between voters or ACL. Next I'll explain how you can use (Hierachy) voters to achieve your goal.

As for your problem. Mostly these kind of uses are handled in the code itself. I've seen a lot of different forms for an entity. UserPostFormType, ModeratorPostFormType and AdminPostFormType. This isn't very dry as you can see. And checking the type of user in the code

You can then assign these roles to the correct user role.

You can now use the Hierarchy Voter to check if a user can modify or view a certain property. The cleanest solution would be to create a Listener on you form which adds fields on your forms based the permissions the current user has.

Not the answer you're looking for? Browse other questions tagged symfony acl or ask your own question.