I have the following data model: 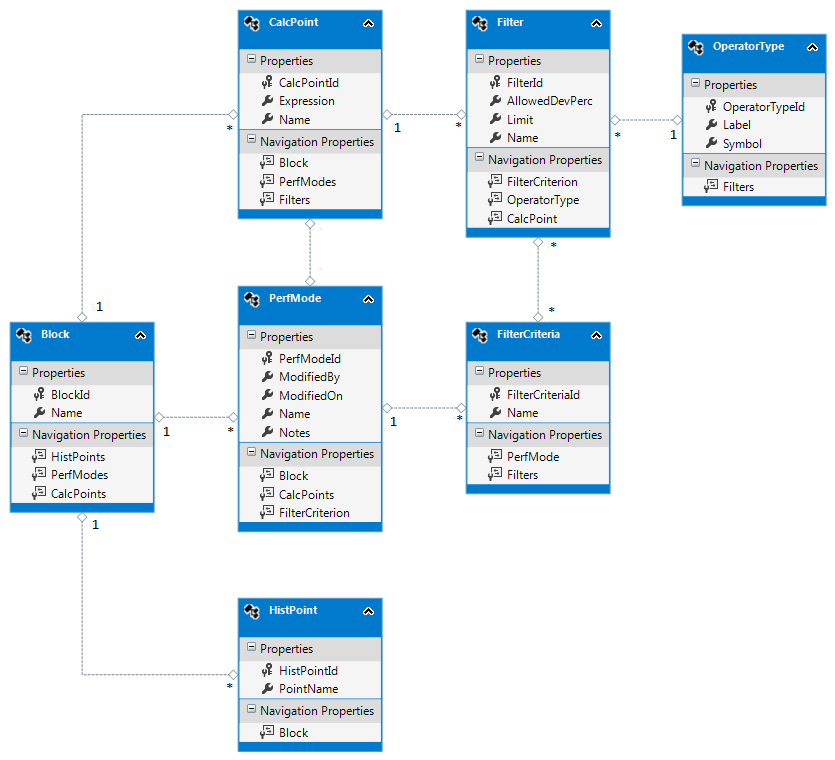 My business logic works with detached entities so I'm using GraphDiff to perform updates. I'm having trouble updating the PerfModes/CalcPoints association. Conceptually, Block owns CalcPoints and PerfModes, but CalcPoints can be associated with any number of PerfModes.

I'm trying to do updates at the Block level. The code I came up with doesn't throw any errors (while other attempts did) but neither does it update the PerfModes/CalcPoints association.

I probably don't have a full grasp of EF graphs and GraphDiff. How do I ensure that the many-to-many PerfModes/CalcPoints association gets updated correctly?

After looking over andyp's answer, I pulled down the latest version of GraphDiff from GitHub and tried the following mappings:

This correctly updates my PerfModes/CalcPoints association. I switched back to my original mappings and still saw the issue of the association not updating, so it seems there's a problem with trying to update the entire model at once. I'd be fine with making multiple UpdateGraph calls, but what would be the best way to break them out?

Here's a gist with relevant code and a failing unit test.

I'm inheriting the EF generated container class to create my own context with proxy creation disabled. Does that cause a problem with GraphDiff?

As your mappings seemed to be correct, I've tried to reproduce your issue like this:

All entities are simple POCOs with an int key and just IDbSet<T>s on my DbContext. I've neither added anything in OnModelCreating(..) via the fluent API nor used any attributes on the navigation properties.

My code above is working properly, so I've got a couple of suggestions / questions:

Not the answer you're looking for? Browse other questions tagged c# entity-framework-6 graphdiff or ask your own question.

1532
How do I update the GUI from another thread?
3
Updating a many-to-many relation using GraphDiff cause an error
1
UpdateGraph with self referencing entity
1
Setting association to foreign key to inherited object using graphdiff and Entity Framework
4
Empty rows insertion in Many-to-One and Many-to-Many relationships in GraphDiff
2
Can GraphDiff be used for partial updates of simple entities too?
0
Updating entity with many to many relationship
1
The relationship could not be changed because one or more of the foreign-key properties is non-nullable on saving
2
How to update self-referencing graph using Entity Framework?