It is recommended to not to use import * in Python.

Can anyone please share the reason for that, so that I can avoid it doing next time?

According to the Zen of Python:

Explicit is better than implicit.

You don't pass **locals() to functions, do you?

Since Python lacks an "include" statement, and the self parameter is explicit, and scoping rules are quite simple, it's usually very easy to point a finger at a variable and tell where that object comes from -- without reading other modules and without any kind of IDE (which are limited in the way of introspection anyway, by the fact the language is very dynamic).

The import * breaks all that.

Also, it has a concrete possibility of hiding bugs.

Now, if the bar module has any of the "os", "mystuff", etc... attributes, they will override the explicitly imported ones, and possibly point to very different things. Defining __all__ in bar is often wise -- this states what will implicitly be imported - but still it's hard to trace where objects come from, without reading and parsing the bar module and following its imports. A network of import * is the first thing I fix when I take ownership of a project.

Don't misunderstand me: if the import * were missing, I would cry to have it. But it has to be used carefully. A good use case is to provide a facade interface over another module. Likewise, the use of conditional import statements, or imports inside function/class namespaces, requires a bit of discipline.

I think in medium-to-big projects, or small ones with several contributors, a minimum of hygiene is needed in terms of statical analysis -- running at least pyflakes or even better a properly configured pylint -- to catch several kind of bugs before they happen.

Of course since this is python -- feel free to break rules, and to explore -- but be wary of projects that could grow tenfold, if the source code is missing discipline it will be a problem.

That is because you are polluting the namespace. You will import all the functions and classes in your own namespace, which may clash with the functions you define yourself.

Furthermore, I think using a qualified name is more clear for the maintenance task; you see on the code line itself where a function comes from, so you can check out the docs much more easily.

It is OK to do from ... import * in an interactive session.

Say you have the following code in a module called foo:

and then in your own module you have:

You now have a difficult-to-debug module that looks like it has lxml's etree in it, but really has ElementTree instead.

Understood the valid points people put here. However, I do have one argument that, sometimes, "star import" may not always be a bad practice:

Note that in general the practice of importing * from a module or package is frowned upon, since it often causes poorly readable code.

These are all good answers. I'm going to add that when teaching new people to code in Python, dealing with import * is very difficult. Even if you or they didn't write the code, it's still a stumbling block.

I teach children (about 8 years old) to program in Python to manipulate Minecraft. I like to give them a helpful coding environment to work with (Atom Editor) and teach REPL-driven development (via bpython). In Atom I find that the hints/completion works just as effectively as bpython. Luckily, unlike some other statistical analysis tools, Atom is not fooled by import *.

However, lets take this example... In this wrapper they from local_module import * a bunch modules including this list of blocks. Let's ignore the risk of namespace collisions. By doing from mcpi.block import * they make this entire list of obscure types of blocks something that you have to go look at to know what is available. If they had instead used from mcpi import block, then you could type walls = block. and then an autocomplete list would pop up. 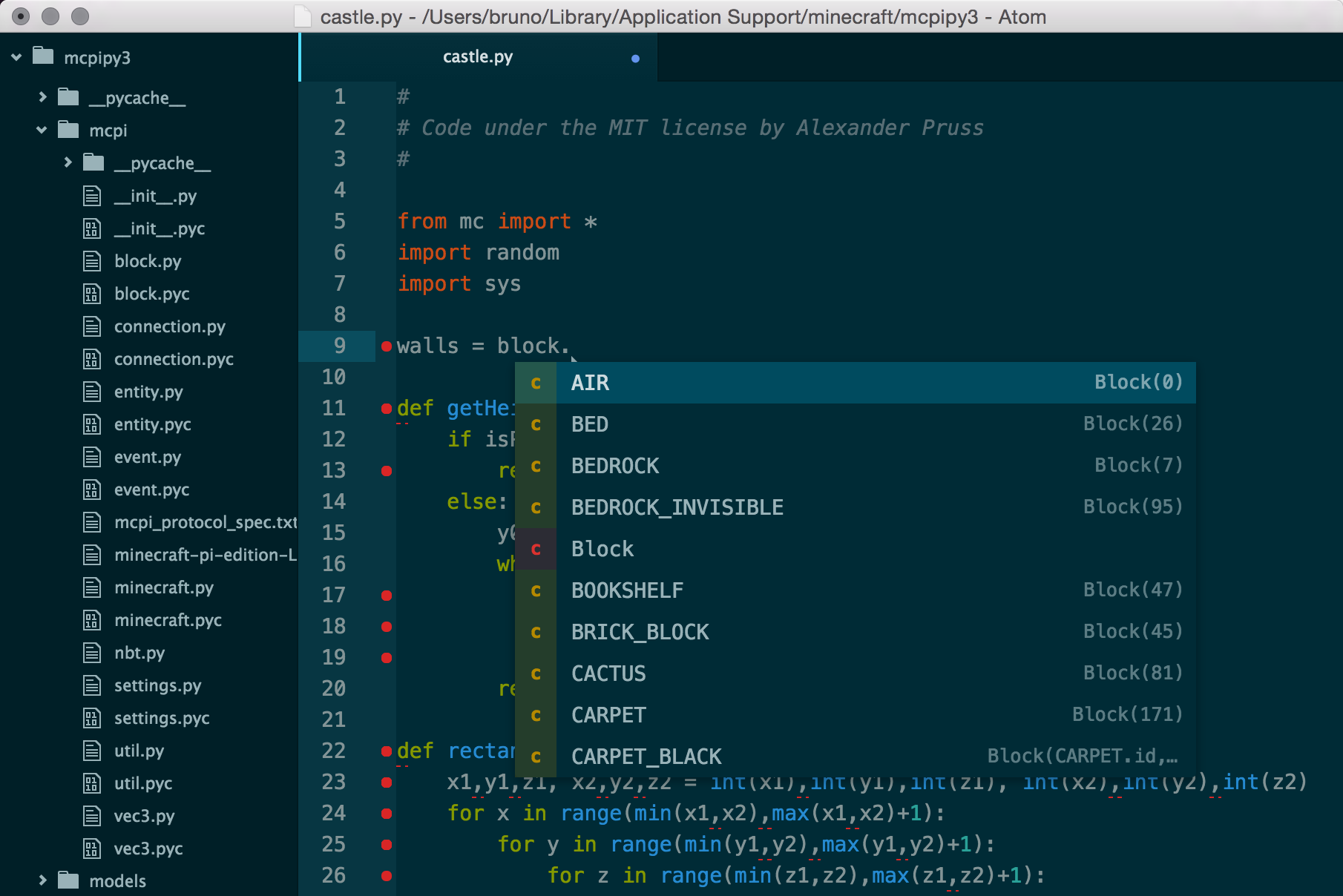 It is a very BAD practice for two reasons:

For point 1: Let's see an example of this:

Here, on seeing the code no one will get idea regarding from which module b, c and d actually belongs.

On the other way, if you do it like:

It is much cleaner for you, and also the new person joining your team will have better idea.

For point 2: Let say both module1 and module2 have variable as b. When I do:

Here the value from module1 is lost. It will be hard to debug why the code is not working even if b is declared in module1 and I have written the code expecting my code to use module1.b

If you have same variables in different modules, and you do not want to import entire module, you may even do:

As a test, I created a module test.py with 2 functions A and B, which respectively print "A 1" and "B 1". After importing test.py with:

But if I do the following:

there is no reference to "test" in the namespace, so there is no way to reload it after an edit (as far as I can tell), which is a problem in an interactive session. Whereas either of the following:

will add "test" or "tt" (respectively) as module names in the namespace, which will allow re-loading.

the names "A" and "B" show up in the namespace as functions. If I edit test.py, and repeat the above command, the modified versions of the functions do not get reloaded.

And the following command elicits an error message.

If someone knows how to reload a module loaded with "from module import *", please post. Otherwise, this would be another reason to avoid the form:

As suggested in the docs, you should (almost) never use import * in production code.

By default, from package import * imports whatever names are defined by the package's __init__.py, including any submodules of the package that were loaded by previous import statements.

If a package’s __init__.py code defines a list named __all__, it is taken to be the list of submodule names that should be imported when from package import * is encountered.

Now consider this example (assuming there's no __all__ defined in sound/effects/__init__.py):

The last statement will import the echo and surround modules into the current namespace (possibly overriding previous definitions) because they are defined in the sound.effects package when the import statement is executed.

4
Python, is "import *" bad if I am importing all classes / functions from a file?
2
In general, is it a bad practice to use the statement "from module import *" in my python code?
1
The difference between np.function and function
2
type object 'datetime.timezone' has no attribute 'now'
0
Trying to open image with PIL
0
Why are some modules imported with "*" and some not?
1
Why is it bad practice to use from module import *?
1
Referencing a specific function in python by namespace?
0
Is there a way to prefix all of the functions in a python module?
0
Should I use from tkinter import * or import tkinter as tk?
See more linked questions