Where does iOS keep its data folder

In Android, if you have root, you can access a folder /data/data/<package name>

In this folder you can find databases or other files for your project.

Is this folder available on iOS if you have Jailbreak?

I did find some root explorers for iOS but I was not able to find that folder.

Android and iOS are completely different operating systems, so you shouldn't expect them to have the same file system layout.

In iOS, typically, apps store their data in a folder named Documents, that is saved in a location next to where the app itself is installed (†).

For example, for 3rd-party (App Store) apps, the app is installed under /var/mobile/Applications/ (†) and then a folder that's named with a unique identifier string. Under that folder, you will find the app at MyAppName.app. On the same level, you'll see a Documents folder, that is automatically created for you. So, a complete folder hierarchy might look like this:

It is important to note that you do not need a jailbroken phone to access this folder. You can install a tool like iBrowse on your computer, and use that to browse the Documents folder of your 3rd-party apps. 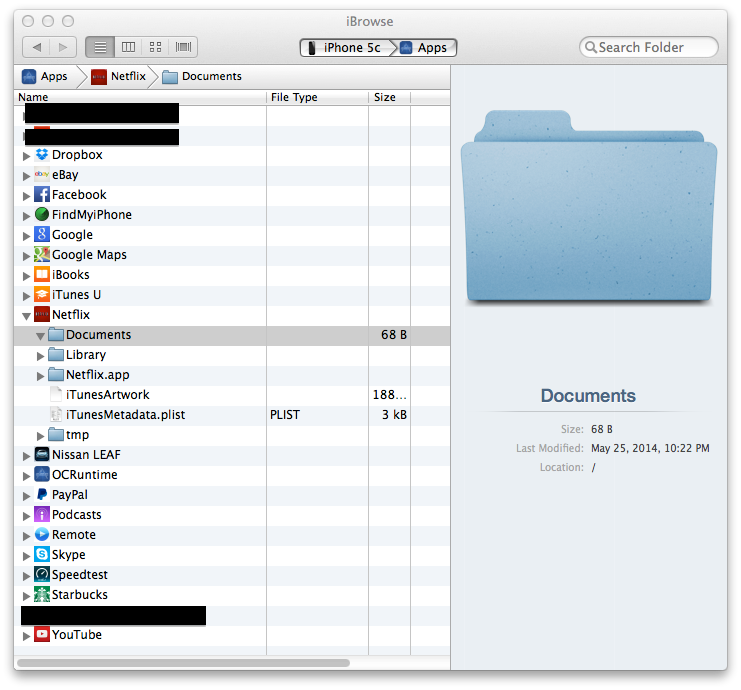 However, if you want to be able to browse any folder on the filesystem, you would have to jailbreak the phone, and then could use iBrowse, or just ssh, to get into wherever you like.

Another note is that if you are building a "system" application for a jailbroken device, that will be installed under /Applications/, instead of /var/mobile/Applications/ (†), then you actually do need to manually create a documents folder for your app. See this tutorial for more about that (see bottom of page), or read this answer.

In recent versions of iOS (8+, I believe), the 3rd-party data folders have moved. What was in /var/mobile/Applications/ is now under /var/mobile/Containers/Data/Application/. App bundles and their data/documents folders have been separated on the filesystem.

Theses files can be found using any file explorer utility under the application folder.

No, that folder doesn't exist by default under iOS unless you (or somebody else) created it.

Not the answer you're looking for? Browse other questions tagged ios mobile root jailbreak or ask your own question.

399
Is there a way for non-root processes to bind to “privileged” ports on Linux?
177
Moving Files into a Real Folder in Xcode
150
How to get root access on Android emulator?
1387
Passing Data between View Controllers
202
How do I get the APK of an installed app without root access?
5
Once jailbroken, will iOS apps run with root privilege?
296
Can I safely delete contents of Xcode Derived data folder?
880
Xcode error “Could not find Developer Disk Image”