How are MAC addresses used in routing packets?

I recently found that packets are encapsulated within ethernet frames. Packets use IP addresses, frames use MAC addresses.

Why aren't IP addresses used in ethernet frames for routing? I understand that when trying to access a basic website, the computer goes to a DNS to find the IP address relevant to the user-entered domain name. How do computers find the correct MAC address?

Really, how are MAC addresses used in routing internet traffic?

IP packets aren't always encapsulated in Ethernet frames. There are other physical media such as ISDN, etc. When packets are routed, IP addresses are used to determine the next hop and the physical address is used to physically identify the interface serving as the next hop. Only the former (determining next-hop) is usually called routing.

Bit late but still here is my answer :) ... To send data you need two address, the MAC address and the IP address. Basically the sending host will ARP for a MAC address, this occurs when the local host doesn't know the MAC address of the host it has an IP address for or it will ARP for the default gateway MAC address (if it doesn't already know it) if the IP address in on a different subnet/ network. Once it obtains a MAC address the IP packet is encapsulated in a L2 frame and sent across the media. If the IP packet is meant for a host on a different subnet/ network, it will be sent to the default gateway, this router will de-encapsulate the L2 frame (remove and discard it) check the IP address and will forward it. For the router to do this it needs a MAC address to send it over the media, It will look up the next hop in it's routing table, encapsulate the IP packet with the same source and destination IP address that was sent from the original host into a new L2 frame. This time the MAC address for the source address will be that of the forwarding interface of the router, and the receiving interface of the next hop will be the destination MAC address. This will continue from hop to hop until it reaches the final host, each time the MAC addresses will change, but the original IP address will remain the same.

Here's the key point -- there can be more types of packets than INTERNET traffic. You could be using IPX, which is non-routable. How do clients identify each other? By the MAC address.

Routing != Addressing, which is really where the MAC comes into play.

In order to be routed, the OSI model adds a layer to allow for path discovery to the next gateway. This layer is responsible for routing, but knows nothing about the MAC address.

As a side note, at the hardware level, MAC addresses ARE used by switches, but not for routing. From How Stuff Works:

The switch gets the first packet of data from Node A. It reads the MAC address and saves it to the lookup table for Segment A. The switch now knows where to find Node A anytime a packet is addressed to it. This process is called learning.

In this way, a switch can make sure that traffic is only outputted to the correct port. This isn't accomplishing routing so much as reducing network congestion. Only broadcasts and traffic destined specifically for that MAC address should be sent out the port.

Recently I have been thinking about the same and came upon this question. Here is my answer to this question. Actually MAC address is needed for correctly sending the packet to right destination. This is specially true when packet is needed to sent over a VLAN. There can be multiple switches/routes connected on that VLAN over multiple physical interfaces. However IP Routing is unaware of these physical interface. It only knows about the logical connectivity. For example, route 10.10.10.0/24 is reachable via VE/VIF0.10(logical VLAN interface) and/or nexthop neighbor is 20.20.20.1. There could be multiple interfaces under VLAN 10. Then to which interface packet is sent out? This is where ARP comes in the picture. ARP helps to discover the MAC address associated with the next-hop IP address. When switch/router learns the nexthop MAC. along with that it learns the physical interface also via which that MAC is reachable. Hence while routing packet, firstly MAC corresponding to the destination IP is searched and then the physical interface associated with that MAC is searched. Finally packet is sent out via that physical interface. The MAC corresponding to that destination IP is used as destination MAC. In absence of this, routed packets will always be flooded in the outgoing VLAN.

Answer: MAC addresses are not used in the process of routing of a packet.

There are 2 models (TCP/IP and ISO/OSI)

In detail: Your app has some data. This is encapsulated by mentioned layers. Encapsulation means that a header with fields is added at each layer. If your data never leave the local network the MAC address will be the same. Once your data needs to be delivered outside your network the frame header is stripped by router and is replaced by router fields.

UPDATE 2021: Some people seems never heard of ISO OSI model and put this answer as incorrect. 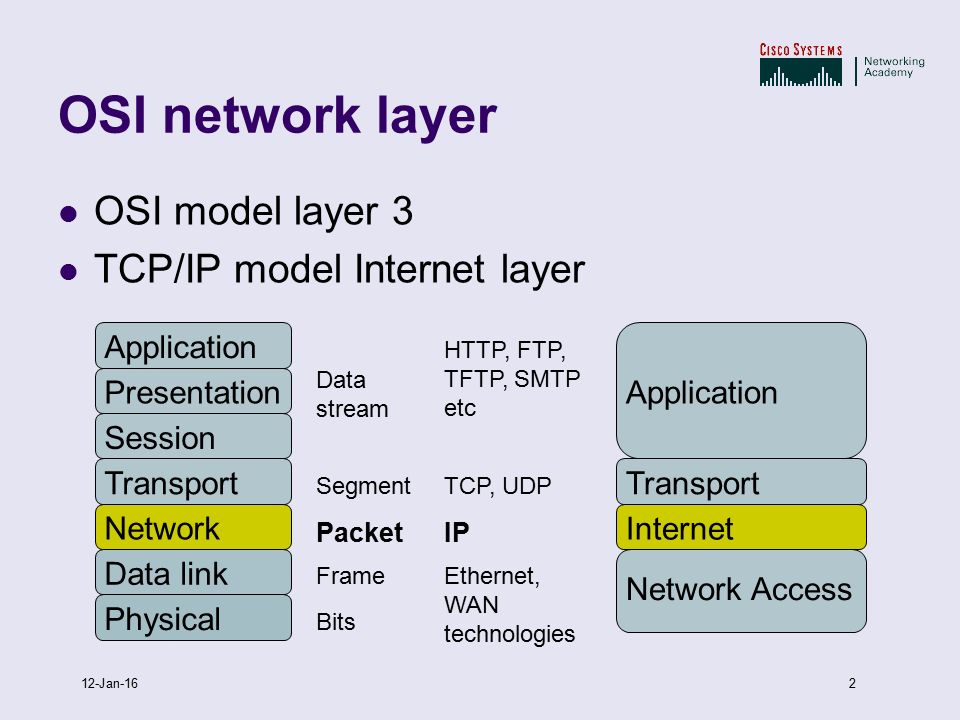 Not the answer you're looking for? Browse other questions tagged tcp ip or ask your own question.

19
How do two computers connect to same external address through NAT?
2
How to get Mac and IP address using ASP.NET C# of the login User
5
Why not use MAC addresses instead of Local IPs?
0
Why TCPDUMP shows Ethernet packet when querying TCP packet?
1
Server not receiving TCP SYN packets
0
How does a server know which domain name was used?