Algorithm to select a single, random combination of values?

Say I have y distinct values and I want to select x of them at random. What's an efficient algorithm for doing this? I could just call rand() x times, but the performance would be poor if x, y were large.

Note that combinations are needed here: each value should have the same probability to be selected but their order in the result is not important. Sure, any algorithm generating permutations would qualify, but I wonder if it's possible to do this more efficiently without the random order requirement.

How do you efficiently generate a list of K non-repeating integers between 0 and an upper bound N covers this case for permutations.

algorithm combinations
Share
Improve this question
edited May 23 '17 at 12:17

Robert Floyd invented a sampling algorithm for just such situations. It's generally superior to shuffling then grabbing the first x elements since it doesn't require O(y) storage. As originally written it assumes values from 1..N, but it's trivial to produce 0..N and/or use non-contiguous values by simply treating the values it produces as subscripts into a vector/array/whatever.

In pseuocode, the algorithm runs like this (stealing from Jon Bentley's Programming Pearls column "A sample of Brilliance").

That last bit (inserting J if T is already in S) is the tricky part. The bottom line is that it assures the correct mathematical probability of inserting J so that it produces unbiased results.

Note that, in accordance with the combinations tag in the question, the algorithm only guarantees equal probability of each element occuring in the result, not of their relative order in it.

Assuming that you want the order to be random too (or don't mind it being random), I would just use a truncated Fisher-Yates shuffle. Start the shuffle algorithm, but stop once you have selected the first x values, instead of "randomly selecting" all y of them.

Of course this means you've trashed the input array - if this means you'd need to take a copy of it before starting, and x is small compared with y, then copying the whole array is not very efficient. Do note though that if all you're going to use it for in future is further selections, then the fact that it's in somewhat-random order doesn't matter, you can just use it again. If you're doing the selection multiple times, therefore, you may be able to do only one copy at the start, and amortise the cost.

If you really only need to generate combinations - where the order of elements does not matter - you may use combinadics as they are implemented e.g. here by James McCaffrey.

Contrast this with k-permutations, where the order of elements does matter.

In case you need combinations, you may really only need to generate one random number (albeit it can be a bit large) - that can be used directly to find the m th combination. Since this random number represents the index of a particular combination, it follows that your random number should be between 0 and C(n,k). Calculating combinadics might take some time as well.

It might just not worth the trouble - besides Jerry's and Federico's answer is certainly simpler than implementing combinadics. However if you really only need a combination and you are bugged about generating the exact number of random bits that are needed and none more... ;-)

While it is not clear whether you want combinations or k-permutations, here is a C# code for the latter (yes, we could generate only a complement if x > y/2, but then we would have been left with a combination that must be shuffled to get a real k-permutation):

Another, more elaborate implementation that generates k-permutations, that I had lying around and I believe is in a way an improvement over existing algorithms if you only need to iterate over the results. While it also needs to generate x random numbers, it only uses O(min(y/2, x)) memory in the process:

The general idea is to do a Fisher-Yates shuffle and memorize the transpositions in the permutation. It was not published anywhere nor has it received any peer-review whatsoever. I believe it is a curiosity rather than having some practical value. Nonetheless I am very open to criticism and would generally like to know if you find anything wrong with it - please consider this (and adding a comment before downvoting).

A little suggestion: if x >> y/2, it's probably better to select at random y - x elements, then choose the complementary set.

If, for example, you have 2^64 distinct values, you can use a symmetric key algorithm (with a 64 bits block) to quickly reshuffle all combinations. (for example Blowfish).

This is not random in the pure sense but can be useful for your purpose. If you want to work with arbitrary # of distinct values following cryptographic techniques you can but it's more complex.

The trick is to use a variation of shuffle or in other words a partial shuffle.

NOTE the algorithm is strictly O(n) in both time and space, produces unbiased selections (it is a partial unbiased shuffling) and non-destructive on the input array (as a partial shuffle would be) but this is optional

another approach using only a single call to PRNG (pseudo-random number generator) in [0,1] by IVAN STOJMENOVIC, "ON RANDOM AND ADAPTIVE PARALLEL GENERATION OF COMBINATORIAL OBJECTS" (section 3), of O(N) (worst-case) complexity 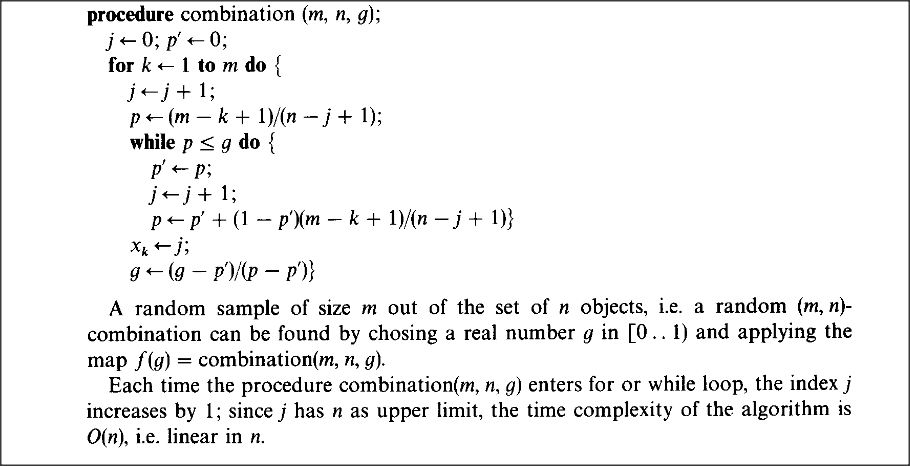 Here is a simple way to do it which is only inefficient if Y is much larger than X.

Basically, copy the first X of your distinct values to your output array, and then for each remaining value, randomly decide whether or not to include that value.

The random number is further used to choose an element of our (mutable) output array to replace.

4
Generate different random numbers within a range
0
Mark M cells on a NxN board randomly with equal probability
-1
You have one billion numbers, implement getRandom() which returns a random number from them
173
Select N random elements from a List<T> in C#
183
Unique (non-repeating) random numbers in O(1)?
30
Unique random number generation in an integer array
28
How do you efficiently generate a list of K non-repeating integers between 0 and an upper bound N
9
Most efficient way of randomly choosing a set of distinct integers
21
Choosing k out of n
12
Efficiently pick n random elements from PHP array (without shuffle)
See more linked questions

611
Algorithm to return all combinations of k elements from n
1558
What is the best algorithm for overriding GetHashCode?
9
Most efficient way of randomly choosing a set of distinct integers
1161
Ukkonen's suffix tree algorithm in plain English
1768
Image Processing: Algorithm Improvement for 'Coca-Cola Can' Recognition
976
How to find time complexity of an algorithm
1985
What is the optimal algorithm for the game 2048?
26
Is there an efficient way to generate N random integers in a range that have a given sum or average?