I am having a issue with Xcode where the error "Source Kit Service Terminated" is popping up and all syntax highlighting and code completion is gone in Swift. How can I fix this?

Here is an example image: 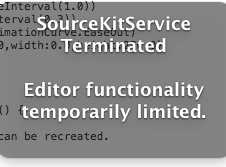 The answer to mine (Xcode6-Beta7) was simply to delete the Derived Data folder.

Preferences > Locations > Derived Data > click the arrow to open in Finder > trash it.

Hope this helps someone. There's obviously many reasons why this crash can occur.

I believe I may have found a more general purpose solution. Below are the steps I used to encourage Xcode not to produce the SourceKitService Terminated error.

The symptoms I was having:

What I did to correct this issue.

If you are only having an issue within the context of a Swift project, try this alone first. If that doesn't work, then try all of the steps further below.

The more lengthy and involved process. (The first 3 steps are not for sure helpful, but I did them, and so record them here)

It appears the issue is with Xcode6 not being able to properly find, and connect, to the simulator. I have not been able to determine why this is the case, but this has allowed me to continue developing with Swift. This may have to do with the fact the simulator binaries seem to have moved.

You just need to delete the "ModuleCache", this is some kind of cache used by Xcode for Autocompletion.

Copy and paste the following line in the Terminal:

SourceKitService crashes on my system as soon as I type

I'm using Xcode 6 beta 6 and it does not matter if I type it into an empty file or add it to an existing one. As soon as the source contains one extension block, it will crash. This happens even on newly created projects.

My "solution" is to avoid extension in the sources I'm currently working on. I comment out the end of a class block and the beginning of the extension block. As soon as I have finished my work on the class, I comment them in again:

It started happening on my spritekit project after inserting the touchesMoved-function. This function uses forced unwrapping, which seems to cause the problem:

I found a solution on Apple's Developer Forums (which requires login, so I'll explain it here too).

TLDR: Don't import a @protocol in your Objective-C to Swift bridging header that is named the same as an @interface. For example, the Facebook SDK has both a protocol and an interface named "FBGraphObject".

It sure is a temporary solution just to keep you functional and you'll have to use Cocoapods or otherwise build Facebook SDK yourself rather than using the framework library.

For the time being, you'll need to make sure you don't have conflicting @protocol and @interface declarations and that includes 3rd party libraries you may be using.

This cost me today, hope it helps!

Use other name than Swift for the project. "Swift" is reserved.

I had this problem every few seconds in Xcode 6 Beta 3, and it continued even in completely new projects. I changed the Deployment Target from 8.0 to 7.1 and it has stopped.

Is your project named Swift? With seeing that message, build would be failed too(<unknown>:0: error: module name "Swift" is reserved for the standard library). Try using another project name such as SwiftTest. It would work.

In order to fix this you may have some weird issue with your Swift code. For instance having multiple defintions of IBOutlets because you were in the middle of copying and pasting. usually it is just a syntax error that couldnt be handled.

I found that by explicitly (statically) typing the variable types, rather than inferring them, solved the issue for me.

Quit Xcode if it's open. Then from Terminal run:

This will restore Xcode to the default settings. Open Xcode and everything should work again.

For me (xcode 6.1) reason was that I forgot to adopt my subclass to protocol.

For example this is wrong:

and this is ok:

A program consisting only of these two lines (possibly wrong in terms of Swift syntax) is enough to cause the "SourceKitService Terminated" error here:

Got same issue today, the thing was with println, I just tried the old NSLog style to print a value:

The way how we should compose strings in swift has evolved from printf style to inline style, so now you embed your values right into the format string like this:

So, for the example above the solution is:

I had same issue with Xcode6 beta 3 for a project created in beta 2.

It was because of new breaking changes in swift language i.e. array declaration syntax.

Check for the effected code due to breaking changes in beta 3.

One of the example in my case was:

I had to change:

Conclusion: Looks like if there is an error in source code, in some conditions this error is produced by Xcode.

Solution till the bug is fixed: Check for the error manually :)

The solution for me happened to be changing the simulator. I was using iPhone 5S for my simulator and when I switched it to iPhone 5, everything worked perfectly. Hopefully a future version will fix it altogether.

I found that removing derived data from terminal resolves the issue until next crash. :S

I think I figured out one (as there are probably many) of the reasons this occurs.

In my case, I was importing Objective-C files through the Bridging Header that had one of the following true:

Fixing the app targets on the Objective-C files OR removing the import of those file(s) in the Bridging Header all together seems to fix the issue.

FYI - If you need to set the target of Header (.h) files that have no Implementation (.m) file, you can follow these simple steps: Can't change target membership visibility in Xcode 4.5

Just to add one more potential solution here, I had accidentally named a class var the same name as it's type:

This will crash SourceKit FOR SURE. Stupid syntax error, but in case anyone else makes the same mistake.

Edit: also according to @Portland Runner:

Similarly, If you set the return type to the func name you'll get the error.

When this error starts popping up, just comment out the last/recent piece of code you wrote and wait for a while. The syntax highlighting should reappear. This is how I work around the problem.

Summary: If we try to print a dictionary with value as an array a pop-up keeps on popping saying -"SourceKit terminated. Editor functionality temporaly limited". Xcode Freezes and looses context recognition causing text to be blackened.

There is a bug in the Swift compiler / indexer. Some line or lines in your code is giving it difficulty. You will have to edit your code with some other text editor to comment out the offending line(s) before you will be able to open that project with Xcode. If you have no clue what the problem is, comment out all your code. Once you have the project open, you can start bringing back code little by little until the rise in CPU activity tells you that you've found the problem.

My case: Installed beta 3, OSX only project, one file detected the "half-closed range operator has been changed from .. to ..<" error. The pop up starts appearing and code highlighting starts failing.

In xcode, go to your menu bar >> window >> devices (shift+cmd+2) a new window will pop up, and on the bottom left, add a new simulator, specifically one running on iOS 8.0 to the existing list edit: you might need to restart xcode

In my case I had imported missing files in bridged header. After I deleted wrong imports the error notification gone.

I had the same error with the nested Objective-C++ project that now includes Framework with Swift code. In order to fix this issue I had to explicitly build the framework. Once I did that issue is gone, and doesn't come back ;)

As soon as you define a non-private type alias (e.g. typealias Foo = Int) in one Swift file an type the letter c in another file the SourceKitService crashes.

Solution is either resign from using type aliases, wait for the next beta release or wrap your type aliases in class definitions:

Changing the deployment target to iOS 8.0 worked for me. I know someone said moving it to <=7.1 worked, but this problem seems to come in from multiple sources, so this alternative may work.

Not the answer you're looking for? Browse other questions tagged ios swift xcode sourcekitservice or ask your own question.

594
UIScrollView Scrollable Content Size Ambiguity
970
Swift Beta performance: sorting arrays
487
Loading/Downloading image from URL on Swift
633
iOS app with framework crashed on device, dyld: Library not loaded, Xcode 6 Beta
18
SourceKitService Crashed
573
The resource could not be loaded because the App Transport Security policy requires the use of a secure connection
394
How to program a delay in Swift 3
487
Updating to latest version of CocoaPods?
307
Code Sign Error in macOS Monterey, Xcode - resource fork, Finder information, or similar detritus not allowed
493
The use of Swift 3 @objc inference in Swift 4 mode is deprecated?