How do I make an HTTP request in Swift?

You can use URL, URLRequest and URLSession or NSURLConnection as you'd normally do in Objective-C. Note that for iOS 7.0 and later, URLSession is preferred.

Initialize a URL object and a URLSessionDataTask from URLSession. Then run the task with resume().

First, initialize a URL and a URLRequest:

Then, you can load the request asynchronously with:

Or you can initialize an NSURLConnection:

Just make sure to set your delegate to something other than nil and use the delegate methods to work with the response and data received.

For more detail, check the documentation for the NSURLConnectionDataDelegate protocol

Testing on an Xcode playground

If you want to try this code on a Xcode playground, add import PlaygroundSupport to your playground, as well as the following call:

This will allow you to use asynchronous code in playgrounds.

Another option is the Alamofire lib that offers Chainable Request / Response methods.

Swift 4 and above, Decodable and Result enum

//if we want to fetch todo from placeholder API, then we define the ToDo struct and call dataRequest and pass "https://jsonplaceholder.typicode.com/todos/1" string url.

//this prints the result:

Through a small abstraction https://github.com/daltoniam/swiftHTTP

Add to the info plist: 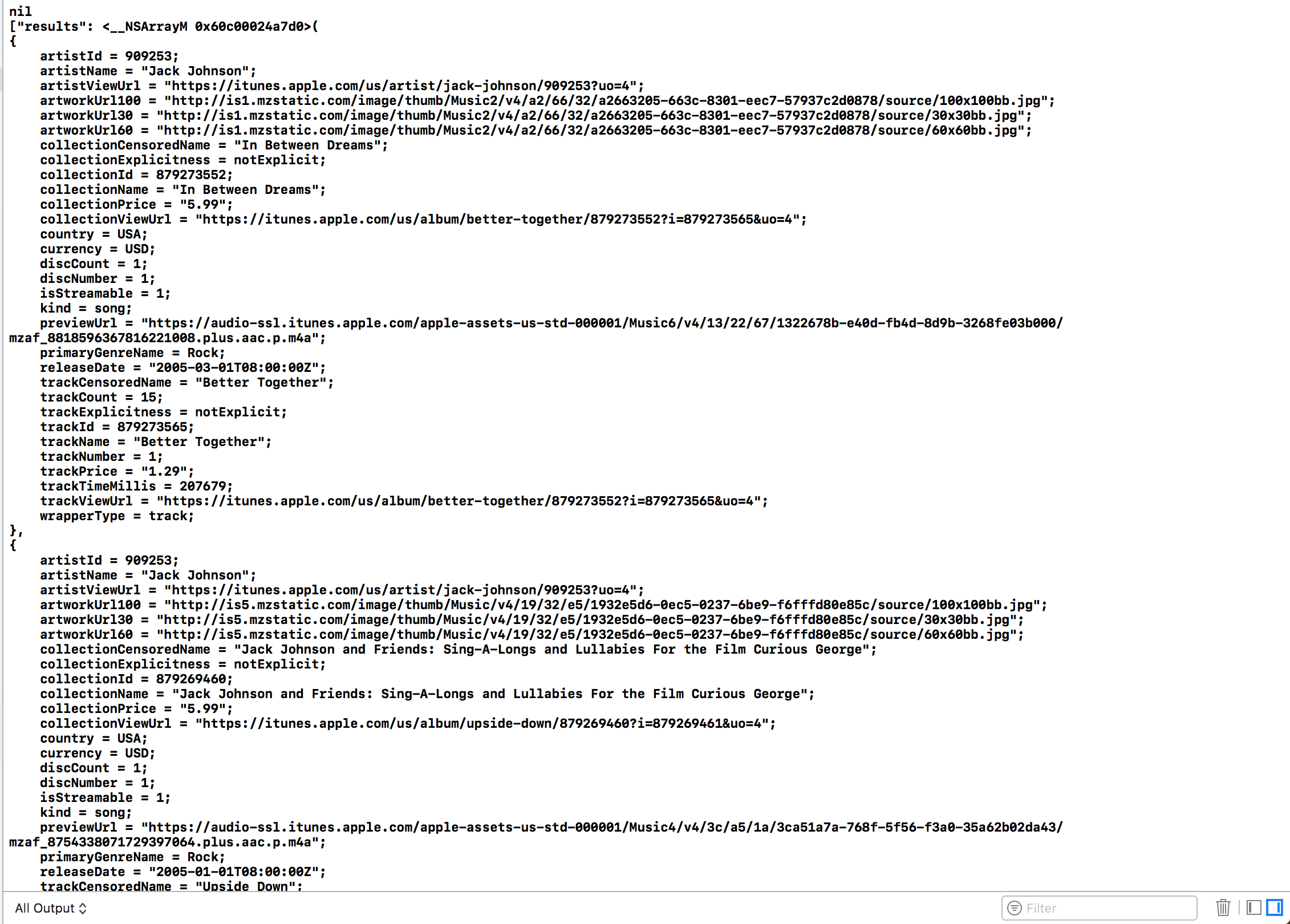 I have done HTTP Request Both methods GET & POST with JSON Parsing this way:

Just adding to cezar's answer, if you want to make web request using Apple's URLSession class, there are multiple way to do the task

1. Simple GET Request with URL

Note : Make sure You must add "NSAppTransportSecurity" key in pList for http requests

2. Simple GET Request with URL and Parameters

3. Simple GET Request with URL with Error Handlings

Your suggestions are appreciated!!

I am calling the json on login button click

Here, I have made a seperate dictionary for the parameters.

You can use Just, a python-requests style HTTP library.

Some example of sending HTTP request with Just:

In both cases, the result of a request r can be accessed in ways similar to python-request:

You can find more examples in this playground

Using this library in synchronous mode in a playground is the closest thing to cURL one can get in Swift.

If you have interest to use this function in SharedClass

A simple Swift 2.0 approach to making a HTTP GET request

The HTTP request is asynchronous so you need a way to get the returned value from the HTTP Request. This approach uses Notifiers and is spread over two classes.

The example is to check the username and password for an identifier token using the website http://www.example.com/handler.php?do=CheckUserJson&json= That is the file is called handler.php and has a switch statement on the do parameter to get a RESTful approach.

In the viewDidLoad we setup the NotifierObserver, set up the json and make the call to the getHTTPRequest function. It will return to the function checkedUsernameAndPassword with the returned parameter from the http request.

There are two static functions in Utility.swift first to encode the json and then to do the HTTP call.

and the Http request

The sendNotification function completes the circle. Notice that in teh Observer there is a ":" at the end of the selector string. This allows the notification to carry a payload in userInfo. I give this a String and an Int.

Note that using HTTP is oldFashioned, prefer HTTPS see How do I load an HTTP URL with App Transport Security enabled in iOS 9?

it will help you surely

//Here is an example that worked for me

PHP Code to get the key values

Here's a very simple Swift 4 example in a playground:

For XCUITest to stop the test finishing before the async request completes use this (maybe reduce the 100 timeout):

To make HTTP requests is core functionality for modern languages and one of the first things many developers learn when acclimating to new environments. When it comes to Swift there are a fair amount of solutions to this problem both built into the language and by the community. Let’s take a look at some of the most popular ones.

This is the Alamofire Request Example:-

We are going to use Swift on the command line in all of the following examples. This doesn’t mean you can’t copy and paste any of this to Xcode, but Swift has an array of useful command-line utilities that make testing the code in this tutorial easy.

Follow along by opening your terminal and navigating to the directory where you want this code to live. My directory is named SwiftHTTP which you will see in the examples in the rest of this post.

Enter the following to generate an executable command-line project:

This will also generate a Package.swift file for you. With this, we can add dependencies to use Swift Package Manager for installing third-party libraries.

First up, we are going to use a built-in API called URLRequest. If you’re following along using the command line, open up main.swift in the Sources directory that was generated from the previous command, and enter the following code:

That’s all you need to do to make an HTTP request. Head back to your terminal and run the following command, keeping in mind that you might have to modify this to fit the name of your Swift project:

URLSession is another popular way to send HTTP requests that are built into the language. URLSession also doesn’t execute requests off of the main thread, which is pretty nifty.

Modify main.swift to include the following code:

The example we used before with URLRequest was synchronous, but this one is asynchronous. For this reason, we are calling RunLoop.main.run() at the end to make sure the script doesn’t finish executing before the request is responded to. Feel free to take that last line out if you are using this code in a different context.

Once you get a response, kill the script with ctrl-c.

The previous methods have been built into the language. But there are also third-party networking libraries in Swift. Alamofire is an excellent (and also the most popular) in the Swift community.

Alamofire is a user-friendly and versatile library with a lot of options. It has chainable request and response methods and takes care of boilerplate functionality such as validating HTTP responses.

Unlike the other examples, we need to modify Package.swift for this to work. We’ll also be using another library called SwiftyJSON, which makes parsing JSON more user-friendly and works very well with Alamofire.

Replace the code inside Package.swift with the following to add Alamofire and SwiftyJSON as dependencies:

Now head back to main.swift to change the code to use Alamofire:

Just like in our previous option, the request is asynchronous so we are calling RunLoop.main.run().

An example for a sample "GET" request is given below.

Not the answer you're looking for? Browse other questions tagged ios objective-c swift iphone nsurlsession or ask your own question.

2
How can I get a PHP variable over to swift
-1
How to send the http post request in SWIFT?
0
Access an external file using swift
439
How do I load an HTTP URL with App Transport Security enabled in iOS 9?
118
How do I run Asynchronous callbacks in Playground
11
HTTP Requests in Swift 3
12
How do you test a URL and get a status code in Swift 3?
9
How to create and send the json data to server using swift language
8
swift JSON login REST with post and get response example
10
Getting Header Response in Swift
See more linked questions

1208
How can I develop for iPhone using a Windows development machine?
1285
How do I sort an NSMutableArray with custom objects in it?
1722
How can I make a UITextField move up when the keyboard is present - on starting to edit?
1021
How do I call Objective-C code from Swift?
962
#pragma mark in Swift?
203
How do I get a plist as a Dictionary in Swift?
947
Swift Beta performance: sorting arrays
100
Make REST API call in Swift
331
How do I make an attributed string using Swift?
1500
Transport security has blocked a cleartext HTTP