I am trying to add new provisioning profile to my Xcode, to test an app on the device. Here are the steps I followed:

Here is the error I get:

Open Keychain Access, then in the File menu select Lock All Keychains.

Then go back to Xcode and clean and rebuild. It will prompt you for your password again to unlock the keychain.

After this, assuming you have no other compile issues, it will succeed! 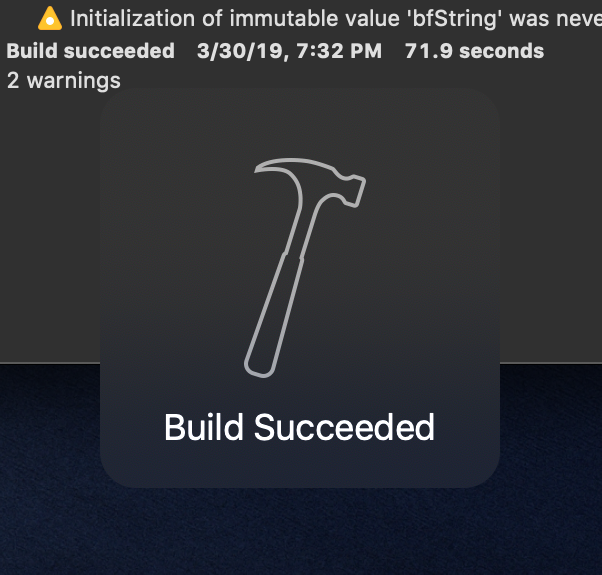 If your keychain is password-protected, specify the password using the -p option:

If you're using a continuous integration system, you'll likely want to inject the password via an environment variable/token, which most CI systems offer in their settings.

The error code in question is described in Apple's docs as an internal error, so it's entirely possible this occurs in other cases too.

It seems like a bug in the code signing mechanism, restarting your mac should solve the problem

Had the same issue on High Sierra/Xcode 9.4.1, all attempts to sign ended in errSecInternalComponent

I have met the same problem, I restart my macOS,and it works.

In China,we have a saying between developers:

Sometimes,the above saying will greatly help you!

In case it helps someone else, I encountered an errSecInternalComponent error with codesign because I was running it over an ssh session to my macOS machine. Running the same command from a terminal window on the macOS machine itself worked.

Presumably this is because codesign needs access to the private key from the login keychain.

Running security unlock-keychain login.keychain (as explained by cbracken's answer) from the same session also should work.

As pointed out by @Equilibrium in one of the comments, if you are in command line env. like Jenkins(my case), you might need to pass the password to the security-unlock command mentioned in the solutions.

So instead of using,

Nothing work for me from the above Solution.

Fallowing Solution Work for me...

I ran security unlock-keychain login.keychain and my login password didn't work. So I rebooted, and then just ran Xcode again and it worked. Running the command works as well. Strange issue.

for anyone that encountered this issue from jenkins and ssh:

high possibility that you have not granted access to the private key in keychain, i tried but not sure why all of these are not working:

this will launch a remote screen, if your jenkins server allow this...

then open keychain.app to grant access of /usr/bin/codesign to the private key

Thx to @Equilibrium and @Jon McClung

I had the same issue Found out the problem is with code signing the app.

Right clicking on the private key associated with the codesigning cert in the keychain, and then clicking on 'allow all applications' instead of relying on a prompt fixed it for me, since the build was happening via ssh.

1) delete the certificate associated to the project

2) Back to the Xcode and revoke the app certificate

3) The Xcode require a new certificate

That's it. Hope it helps to anyone.

And choose always allow in the prompted dialog. And then you could xcodebuild in the remote session.

The above methods are useless to me.

I resoled it by:

That's it. Hope it helps to anyone.

If you get errSecInternalComponent after

In my case BUCK was trying to sign the IPA for development, but there were not any development certificates installed. Changing the build config to release (this is what I needed - to build for iTunes) fixed it for me.

In my case, this solved.

Just wanted to callout if someone face similar issue what I did. In my case my apple dev and distribution certificates, keys and provisioning profiles where upto date. My iOS code build was working in user mode without any issue however it does not work due to code sign issue when the code build runs with root privileges i.e. % sudo or invoking the Xcode using sudo through command line.

So, I copied the corresponding working certificates and keys the login to the system location in the keychain tool. Then it started working without any code sign issue.

Similarly, we can export the required certificates, keys for build from the working machine and import those into non working machine's keychain tool may solve the issue.

Posting a work-around that we finally had to resort to, in case someone else is running out of things to try...

After installing a new Apple Distribution certificate in our "login" keychain, our Jenkins job suddenly started to fail singning iOS apps with the same errSecInternalComponent error:

Our build pipeline calls security unlock-keychain, and we have no problems with our Enterprise Distribution cert (which was coincidentally updated and installed in the same Keychain just a few weeks prior), where the unlocking works as expected.

After trying all the usual things mentioned in this thread and elsewhere, we ended up running codesign manually as the Jenkins user in a new Terminal window, taking the exact same command as found in the Jenkins log: /usr/bin/codesign --force --sign...

This prompted entering the password to unlock the Keychain, which we did, and then selected "Always Allow".

This is obviously a bit of a work-around since we might have to do this again when the cert has expired, and it's really strange that unlocking works for Enterprise certs, but not the cert used for distributing through App Store... They literally share the same pipeline.

Not the answer you're looking for? Browse other questions tagged ios xcode certificate provisioning-profile or ask your own question.