What is an "unwrapped value" in Swift?

I'm learning Swift for iOS 8 / OSX 10.10 by following this tutorial, and the term "unwrapped value" is used several times, as in this paragraph (under Objects and Class):

I don't get it, and searched on the web without luck.

What does this means?

From Cezary's answer, there's a slight difference between the output of the original code and the final solution (tested on playground) : 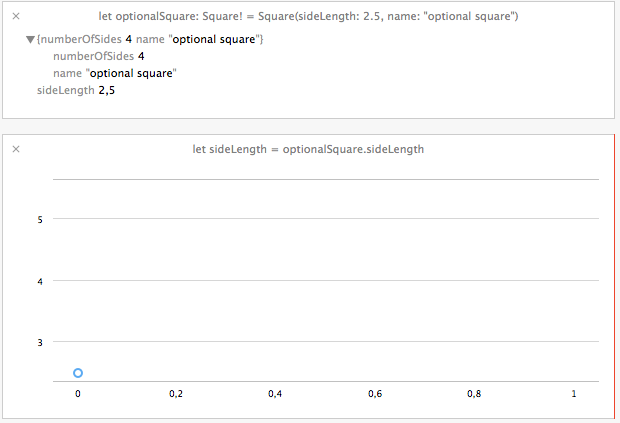 The superclass' properties are shown in the output in the second case, while there's an empty object in the first case.

Isn't the result supposed to be identical in both case?

Related Q&A : What is an optional value in Swift?

First, you have to understand what an Optional type is. An optional type basically means that the variable can be nil.

The question mark indicates the fact that canBeNil can be nil.

This would not work:

To get the value from your variable if it is optional, you have to unwrap it. This just means putting an exclamation point at the end.

You can also declare optionals to automatically unwrap by using an exclamation mark instead of a question mark.

So an alternative way to fix your code is:

The difference that you're seeing is exactly the symptom of the fact that the optional value is wrapped. There is another layer on top of it. The unwrapped version just shows the straight object because it is, well, unwrapped.

The existing correct answer is great, but I found that for me to understand this fully, I needed a good analogy, since this is a very abstract and weird concept.

So, let me help those fellow "right-brained" (visual thinking) developers out by giving a different perspective in addition to the correct answer. Here is a good analogy that helped me a lot.

Think of optionals as being like birthday presents that come in stiff, hard, colored wrapping.

You don't know if there's anything inside the wrapping until you unwrap the present — maybe there is nothing at all inside! If there is something inside, it could be yet another present, which is also wrapped, and which also might contain nothing. You might even unwrap 100 nested presents to finally discover there was nothing but wrapping.

If the value of the optional is not nil, now you have revealed a box containing something. But, especially if the value is not explicitly typed and is a variable and not a predefined constant, then you may still need to open the box before you can know anything specific about what's in the box, like what type it is, or what the actual value is.

What's In The Box?! Analogy

Even after you unwrap the variable, you are still like Brad Pitt in the last scene in SE7EN (warning: spoilers and very R-rated foul language and violence), because even after you have unwrapped the present, you are in the following situation: you now have nil, or a box containing something (but you don't know what).

You might know the type of the something. For example, if you declared the variable as being type, [Int:Any?], then you'd know you had a (potentially empty) Dictionary with integer subscripts that yield wrapped contents of any old type.

That is why dealing with collection types (Dictionaries and Arrays) in Swift can get kind of hairy.

Swift places a high premium on type safety. The entire Swift language was designed with safety in mind. It is one of the hallmarks of Swift and one that you should welcome with open arms. It will assist in the development of clean, readable code and help keep your application from crashing.

All optionals in Swift are demarcated with the ? symbol. By setting the ? after the name of the type in which you are declaring as optional you are essentially casting this not as the type in which is before the ?, but instead as the optional type.

Note: A variable or type Int is not the same as Int?. They are two different types that can not be operated on each other.

at runtime, the debug console will print Optional("foobar"). The "Optional()" part indicates that this variable may or may not have a value at runtime, but just so happens to currently be containing the string "foobar". This "Optional()" indication will remain unless you do what is called "unwrapping" the optional value.

Unwrapping an optional means that you are now casting that type as non-optional. This will generate a new type and assign the value that resided within that optional to the new non-optional type. This way you can perform operations on that variable as it has been guaranteed by the compiler to have a solid value.

Conditionally Unwrapping will check if the value in the optional is nil or not. If it is not nil, there will be a newly created constant variable that will be assigned the value and unwrapped into the non-optional constant. And from there you may safely use the non-optional in the if block.

Note: You can give your conditionally unwrapped constant the same name as the optional variable you are unwrapping.

Conditionally unwrapping optionals is the cleanest way to access an optional's value because if it contains a nil value then everything within the if let block will not execute. Of course, like any if statement, you may include an else block

Forcibly Unwrapping is done by employing what is known as the ! ("bang") operator. This is less safe but still allows your code to compile. However whenever you use the bang operator you must be 1000% certain that your variable does in fact contain a solid value before forcibly unwrapping.

This above is entirely valid Swift code. It prints out the value of myString that was set as "foobar". The user would see foobar printed in the console and that's about it. But let's assume the value was never set:

Now we have a different situation on our hands. Unlike Objective-C, whenever an attempt is made to forcibly unwrap an optional, and the optional has not been set and is nil, when you try to unwrap the optional to see what's inside your application will crash.

Unwrapping w/ Type Casting. As we said earlier that while you are unwrapping the optional you are actually casting to a non-optional type, you can also cast the non-optional to a different type. For example:

Somewhere in our code the variable something will get set with some value. Maybe we are using generics or maybe there is some other logic that is going on that will cause this to change. So later in our code we want to use something but still be able to treat it differently if it is a different type. In this case you will want to use the as keyword to determine this:

Note: The as operator is how you type cast in Swift.

Notice the difference between the two as keywords. Like before when we forcibly unwrapped an optional we used the ! bang operator to do so. Here you will do the same thing but instead of casting as just a non-optional you are casting it also as Int. And it must be able to be downcast as Int, otherwise, like using the bang operator when the value is nil your application will crash.

And in order to use these variables at all in some sort or mathematical operation they must be unwrapped in order to do so.

For instance, in Swift only valid number data types of the same kind may be operated on each other. When you cast a type with the as! you are forcing the downcast of that variable as though you are certain it is of that type, therefore safe to operate on and not crash your application. This is ok as long as the variable indeed is of the type you are casting it to, otherwise you'll have a mess on your hands.

Nonetheless casting with as! will allow your code to compile. By casting with an as? is a different story. In fact, as? declares your Int as a completely different data type all together.

Now it is Optional(0)

Your math teacher would have likely given you an "F". Same with Swift. Except Swift would rather not compile at all rather than give you a grade. Because at the end of the day the optional may in fact be nil. 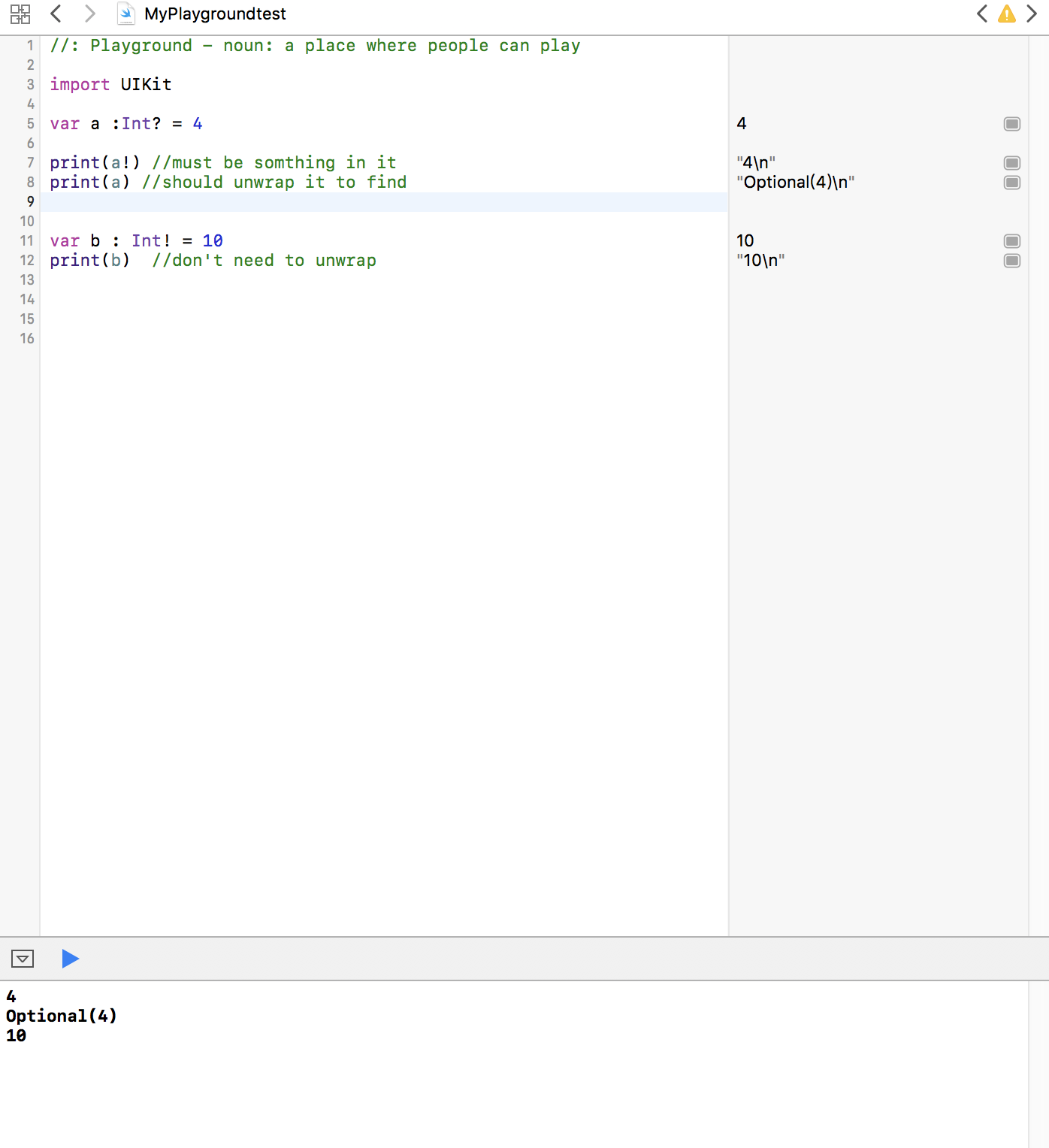 There are 7 ways to unwrapping optional value in Swift.

Not the answer you're looking for? Browse other questions tagged ios swift ios8 or ask your own question.

-2
Remove Unwrapped and make Optional in Swift?
0
Check if a String Contains Another String in Swift
280
What is an optional value in Swift?
27
Does Swift have dynamic dispatch and virtual methods?
12
Convert optional string to int in Swift
-2
Checking if array is nil or not
4
Missing shared_ref
3
No need to unwrap optionals in Swift?
2
Cannot subscript a value of type '[NSObject : AnyObject]' with an index of type 'String'
-2
Why is "let" used instead of var in Swift?
See more linked questions

1094
How do I call Objective-C code from Swift?
510
Why create "Implicitly Unwrapped Optionals", since that implies you know there's a value?
998
#pragma mark in Swift?
972
Swift Beta performance: sorting arrays
6
In Apple Swift, in what case(s) would I not want an implicitly unwrapped optional?
783
Split a String into an array in Swift?
2
Implicitly Unwrapped Optionals in Initialization - Swift
188
Swift: guard let vs if let
0
Implicitly unwrapped optional values and using its value if nill