I have a windows forms project that seems to have lost all of its controls in the design view. When I run the project the controls appear as they should. Only the design view is broken in visual studio for this form, all other forms are the same.

What should I try next?

Wow how annoying! This drove me nuts so I wasted 45 minutes trying to fix it w/out having to re-add the control which would be super annoying (plus this is the 3rd or 4th time this has happened to me in VS 2017 in last few weeks).

For me the solution was to find my control in the Designer file (via "Go To Implementation"). I found out then that the ".Add" line for that control was simply gone? After I manually added it back myself and saved it magically re-appeared in my Windows Form Design view. Screenshot below for reference. 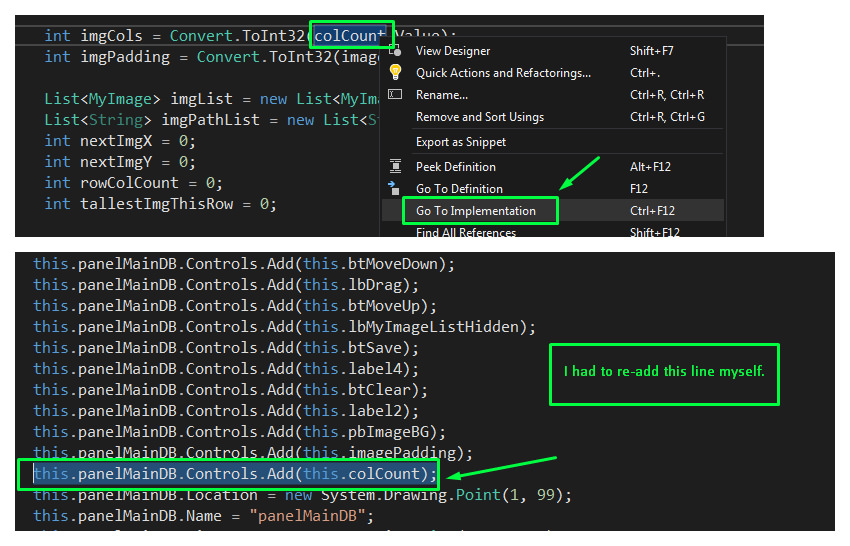 In VS 2017, if you exclude yourForm.Designer.cs from the solution, then re-add it again should fix the problem.

Probably you referenced some usercontrol defined in teh same solution, but in different project, what changed, and must be solved by s simple Solution/Rebuild All. If not, then it could be a build issue (mixed x86 and x64 builds)

Had similar problem (only difference was that the controls were visible when I ran the project in debug mode one or two more times, then they were gone there, too.)

I had to manually re-add code that was lost in the designer.cs file.

This is what my initializeComponent() method had been reduced to:

I had to re-add each component code chunk, one at a time, like this one - listBox1:

Of course, I had no idea what the palette coordinates needed to be. So, I put 10,10 for x,y, in the code. Then switched to the designer view. The control was placed at the top left. I used the designer to put it back where I had it in the first place before Visual Studio wrecked my night.

Make sure you find a reference to your control after the InitializeComponent() method:

One more tip: if you have no idea what properties that the designer.cs class is looking for for your particular control, just make a new one from the toolbox, and go back to the code to see what Visual Studio auto-generates for that control type.

Happy trails, and kiss the next hour goodbye :)

Looks more like another form is being invoked in runetime.

You should have captured the code to understand the application's behaviour (like the form code and program.cs code).

Check and see if the problem is that the designer.cs in not nested correctly. It must be under the .cs file. If not, right-click and 'Exclude From Project' all files associated with the Form, then re-add the Form (.cs) back into the project. This will solve the issue.

Not the answer you're looking for? Browse other questions tagged c# winforms visual-studio screen controls or ask your own question.