Add a point to expand polygon without appending it in Google Maps?

I'm building a polygon in Google Maps through markers that can be dragged to reshape it. So, when there are 3 markers, the polygon is drawn, and further markers are appended in the shape, expanding it. That's fine when the user just want to follow a simple clockwise/counterclockwise pattern, but when he wants to expand the polygon through one of its edges, instead it will append the marker, twisting itself. 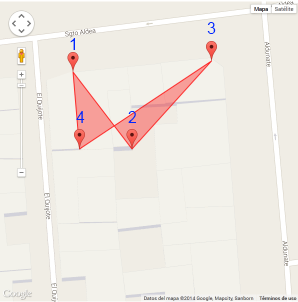 Here in this example, if we add markers 1, 2 and 3, it will be drawn a simple triangle. But if marker 4 is added, the polygon just twists itself.

Instead, I want when 4 is added, it's inserted between markers 1 and 2, like this image: 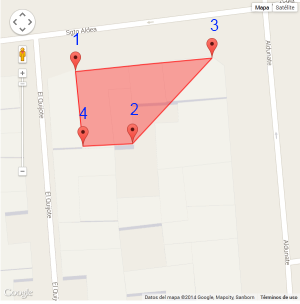 Basically, in the polygon's vertex array, instead of:

I want to have:

So the polygon will expand instead of twist itself.

Is there a way to achieve this? Or I just will have to tell the user to build his polygon clock/counterclockwise?

given an array gmarkers containing google.maps.Marker objects representing the vertices of the polygon:

Finally solved it via finding the nearest edge and inserting it after the first vertex and before the second one of this edge. I used the algorithm from here to use it in javascript:

Shortest distance between a point and a line segment

421
Shortest distance between a point and a line segment
36
Sort latitude and longitude coordinates into clockwise ordered quadrilateral
5
How to sort points in a Google maps polygon so that lines do not cross?
0
Draw google maps polygons

579
How can I determine whether a 2D Point is within a Polygon?
352
Calculate distance between two points in google maps V3
441
Google Maps API v3: How to remove all markers?
570
How to disable mouse scroll wheel scaling with Google Maps API
713
Google Maps JS API v3 - Simple Multiple Marker Example
1
How to displace markers at the same position in google maps?
88
How to offset the center point in Google maps api V3
0
Google maps - load polygon on marker click