Is it possible to remove all Key-Shortcuts from Visual Studio, so I can assign them from scratch? I don't mean to reset them to their default value, but to nothing.

I wanted to do the same with my installation of Visual Studio - to remove all shortcuts and assign my own, from scratch. I managed to achieve this with a hacky AutoHotKey script.

If you select a command that is bound to a shortcut, within the 'Keyboard' section of the Visual Studio Options dialog, the 'Remove' button should activate. Notice that the 'R' is underlined (which, if isn't, hold the Alt key down). 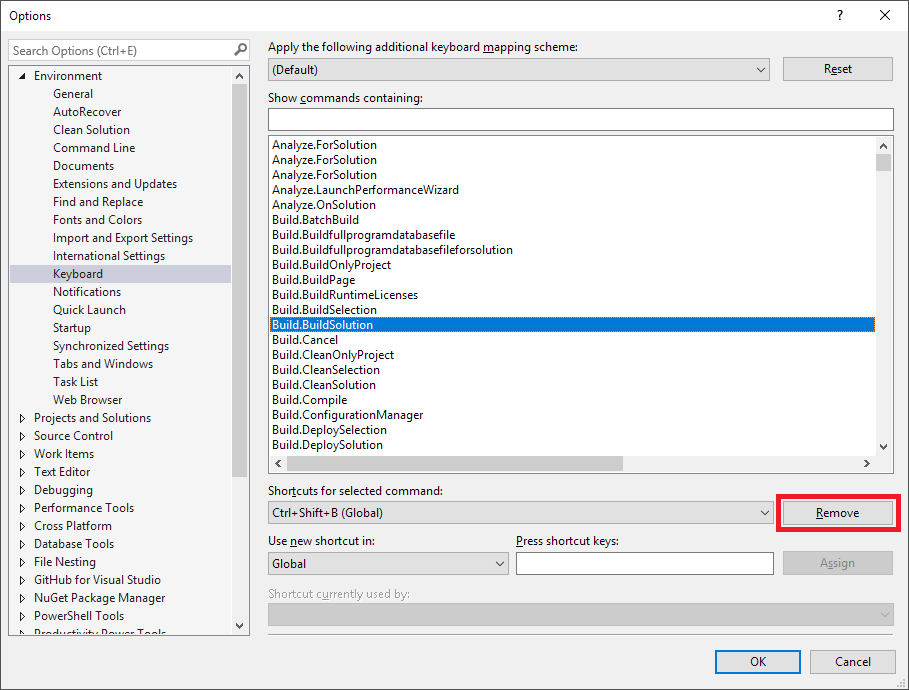 On Windows, this generally means that the button can be activated by pressing Alt, and the underlined character.

Removing all shortcuts is then a matter of repeatedly un-binding the selected command with Alt + R and selecting the next command (↓), which I automated using the following script:

Adjust the number of repetitions (3500), and the hotkey to invoke the script (#z which means Win + Z) as necessary. Run the script, select the first command in the list, press (in this case) Win + Z, and wait for it to complete.

Note that commands don't always have a single key-binding, and therefore you might have to run the script a couple of times, or better yet, send the Alt + R keystroke multiple times a single repetition.

The script will attempt to remove un-assigned shortcuts too, upon which Windows will play a 'beeping' sound and therefore make sure to mute Windows before running the script.