Enable a non-PlayStore UserScript with Chrome 35 and above

Since the version 35 of Google Chrome, the execution of any extension installed outside of the Google's PlayStore is blocked and cannot be enabled from the extensions menu.

The auto-installation of non-store scripts was removed two years ago but downloading the script and performing a drag & drop on the extensions menu still allowed the installation, so it was still possible to create and share scripts for Google's Chrome. But now everything is locked.

I know that this restriction does not apply for dev and canary release channels but the scripts are purposed to be used by users with enough knowledge to know what they do, without forcing them to change their browser. The native support support is rather interresting on Chrome (even if completly locked now), so a solution without a third party plugin (ie : Tampermonkey) is better.

The only way there seems to be left, short of installing an extension like Tampermonkey or getting a different browser, is starting the Chrome browser with the --enable-easy-off-store-extension-install flag.

Edit: Unfortunately, Google removed this flag from Chromium in April.

However, if the user (or any program) starts Chrome without this flag even once, the scripts will be disabled automatically. You can't re-enable them, even with the correct flag; your only option is to uninstall them and re-install then in the easy off-store extension install mode.

So, your options are:

I realize this is probably not what you want to hear, but as Google continues to restrict honest developers because of a few bad players there are no better options.

Edit: there is one more approach that I've found to be working, namely hijacking an installed extension with the correct permissions:

EDIT : I validate this solution because it's what helped me particularly on this problem. A much richer answer is the list of workarounds submited by user2428118. Even if they did not solved my specific problem, they should be considered.

I finally could find an answer to my question thanks to the link posted by yoz, and the fact is that you can still enable a script unrelated to the PlayStore, without any third party plug-in, but as you'll see : it might be better to use TamperMonkey (even if it might imply little adaptations, it's 200% easier).

The solution is to import the unpacked user-script in developer mode. 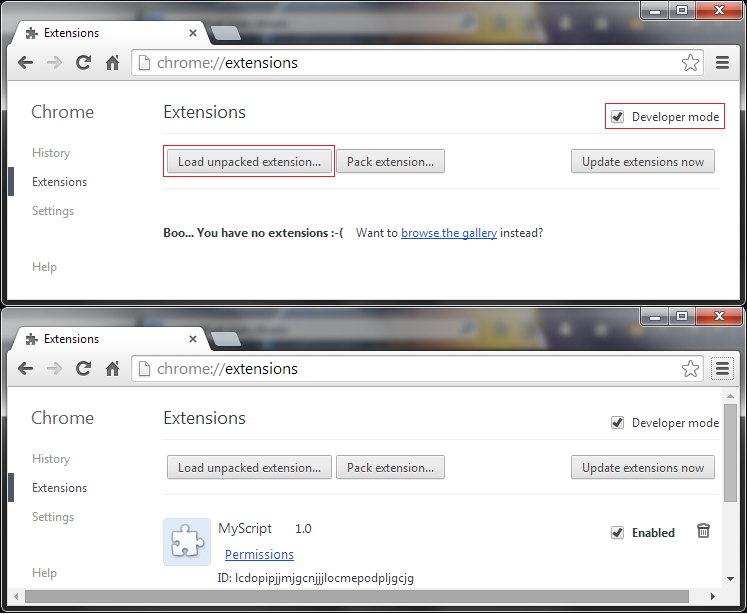 I liked the way user-scripts had native support on Chrome : every third party plugin has some small variations (ie : datas or xhr handling). But the cons are to numerous and to important (especially the two last ones)... Even if enabling a non-PlayStore script is possible in a native way, it became such a pain that I recommend to adapt the script for a plugin such as TamperMonkey. After all, Chrome was an exception since every other browser require a plugin, now these plugins are the only way.

I still feel a bit disappointed, so if anyone happens to find a better solution (still hoping for some white-lists) I would enjoy to offer some bounty.

EDIT : Please note that user2428118 provided a list of other interesting workarounds. Even if they did not solved my specifif problem, they should be considered.

The continuation of solution number 1 from @user2428118 answer.

To ensure that you ALWAYS starts Chrome with --enable-easy-off-store-extension-install flag you, can use (additional to editing all shortcuts in menu start etc.) this registry file:

Replace C:\\Program Files (x86)\\Google\\Chrome\\Application\\chrome.exe with actual path to chrome.exe in your system.

Unfortunately, aside from extensions like Tampermonkey, there don't seem to be good workarounds, given the way your script is generated differently for each user.

This is the best explanation I've found:

Not the answer you're looking for? Browse other questions tagged javascript google-chrome google-chrome-extension userscripts or ask your own question.

2409
Disable/enable an input with jQuery?
164
Manually adding a Userscript to Google Chrome
969
How to detect Safari, Chrome, IE, Firefox and Opera browser?
896
Working with $scope.$emit and $scope.$on
4
Userscript with @match chrome-extension://
623
How to change the color of header bar and address bar in newest Chrome version on Lollipop?
1
Executing Userscripts in Google Chrome permanentely without 3rd party Extension
2
How to add user script js file as a Chrome extension?