I've tried to upload my apk on google play and encountered an error message: "You uploaded a debuggable APK. For security reasons you need to disable debugging before it can be published in Google Play. Learn more about debuggable APKs."

Then I wrote android:debuggable="false" in my manifest and tried again. I've encountered the same error, so I've set the build variant from my module to release and tried generated an apk again, but this time, this error is generated:

I wouldn't recommend turning off the lint checks, they're there for a reason. Instead, check what the error is and fix it.

The error report is saved to [app module]/build/reports/lint-results-yourBuildName-fatal.html. You can open this file in a browser to read about the errors.

It would be nice if Gradle could make it a little more clear where the error report is generated.

I had this problem and solved it by adding:

to my build.gradle file within the android{ } section.

if you want to find out the exact error go to the following path in your project: /app/build/reports/lint-results-release-fatal.html(or .xml). The easiest way is if you go to the xml file, it will show you exactly what the error is including its position of the error in your either java class or xml file. Turning off the lint checks is not a good idea, they're there for a reason. Instead, go to:

In Kotlin is different. First you need to set the following code in Android section of build.gradel of the app folder.

Then run lint from the IDE (Analyze > Inspect Code) or from the command line as follows.

Make sure you defined all the translations in all the string.xml files

In case that you may trying to locate where the problem is, I found mine in the following path of my project: /app/build/reports/lint-results-release-fatal.html(or .xml).

I have faced same issue when creating signed apk from android studio. I just change little bit change on build.gradle file inside android {}

How to find error details 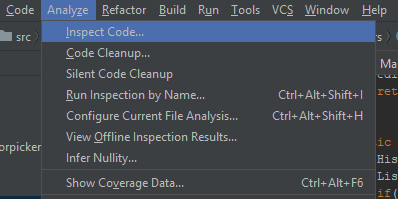 Then in Inspection Results you will see an error

Try These 3 lines in your app.gradle file.

Hello Guys this worked for me, I just modify my BuildTypes like this:

My problem was a missing translation. I had a settings.xml that was not translated as it was not needed, so I had to add "translatable="false" to the strings:

Just find the error reason in here and fix it.

My problem was a missing translation. I had a settings.xml that was not translated as it was not needed, so I had to add "translatable="false" to the strings: 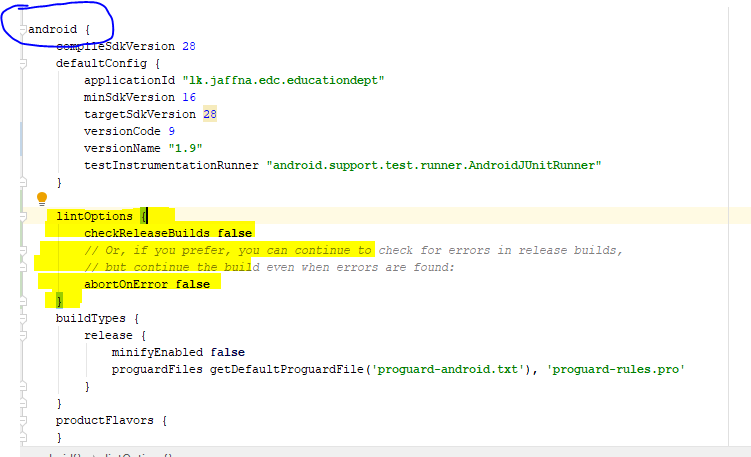 Add this inside android {} build.gradle(Module:App)

Solve this Issue Using this in build.gradle (app) File Inside main Android { inside }

As many people have suggested, it is always better to try and fix the error from the source. check the lint generated file

read the file and you will be guided to where the error is coming from. Check out mine: the error came from improper view constraint.

Remove that statement from your manifest altogether, Eclipse will handle that for you on the fly.

In my case the problem was related to minimum target API level that is required by Google Play. It was set less than 26.

Issue disappeared when I set minimum target API level to 26.

Check the Lint Report for error and warning

Solve all error and warning:)

The above code can fix the problem by ignoring it, but it may result in crashing the app as well.

The good answer is in the following link:

This problem came to me when I updated the Android Gradle Plugin Version to 4.0.1 and the Gradle version to 6.1.1.

If someone is in a hurry, just downgrade the Gradle Plugin Version to 3.6.3 and the Gradle version to 5.6.4. It worked for me.

If you add in app.gradle under android{

It will get work

Not the answer you're looking for? Browse other questions tagged java android gradle or ask your own question.

3359
When to use LinkedList over ArrayList in Java?
1954
"Debug certificate expired" error in Eclipse Android plugins
321
LogCat message: The Google Play services resources were not found. Check your project configuration to ensure that the resources are included
556
How to create a release signed apk file using Gradle?
6
Gradle is generating debuggable APKs on release mode
1
Error generating signed apk with nothing in lint-results-release-fatal
0
Error display where generate singed APK from android studio
0
Not able to generate signed APK?