Anyone please help..
How can I fix the following error:

Simple reinstall zsh will help you:

Alternatively you can try to upgrade zsh

Late to the party on this one, but simply running

solved my issue on MacOS High Sierra. Trying to uninstall gdbm will throw dependency errors against zsh and python, and re-doing the symlinks didn't solve for me, either

I suspect you are running into problems while working with Homebrew on MacOSX. I am actually saying this because I have just run into the exact same situation.

The problem comes after upgrading my MacOSX version to Maverick from Mountain Lion while having already installed Homebrew (of course this may apply to previous and future upgrades). After the upgrade you will need also:

Finally you may find that certain packages are failing due to missing libraries, which seems to be the case you are describing. The idea here is to reinstall the library missing using the brew command.

In your case you would need to reinstall the gdbm library by performing the next steps on your terminal:

That should fix it.

To be able to fix my terminal/iterm2/hyper (all were broke because of broken zsh) I had to first change my terminal settings 'Shells open with' from a custom command to the default login shell. 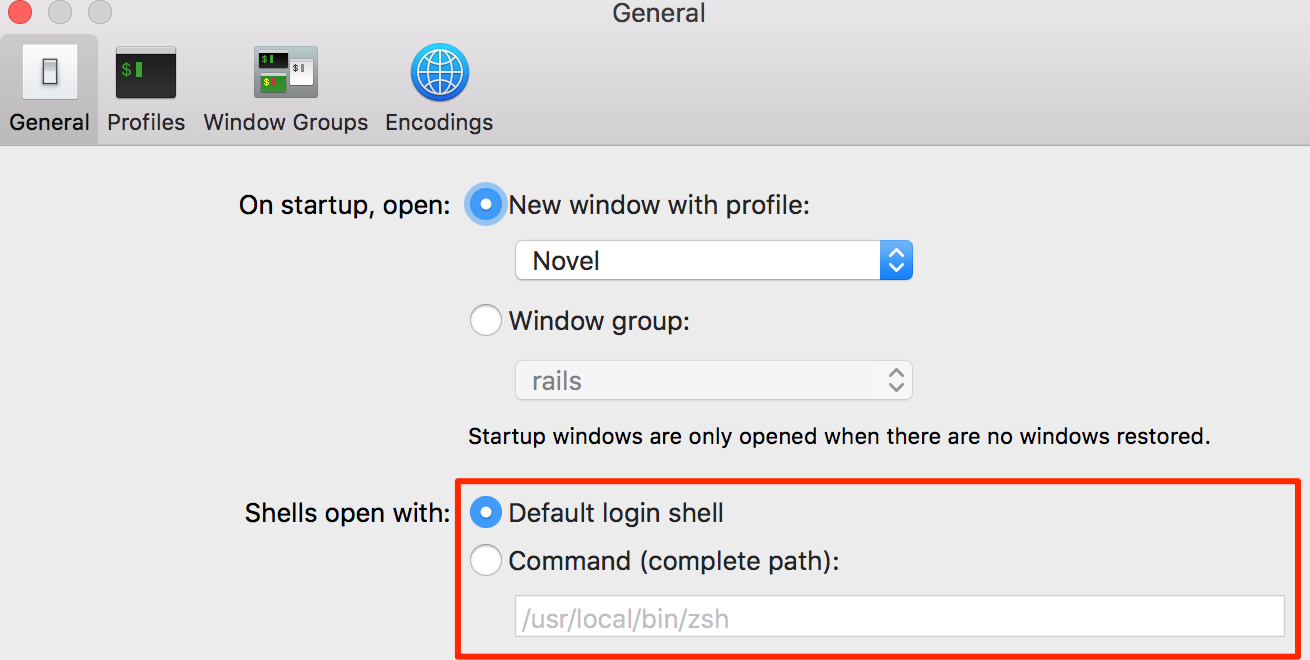 Without these changes, I could not type anything in terminal and iterm2 and hyper were crashing immediately after start.

With these changes, I was able to update my zsh via homebrew as suggested in the other answers by De_Vano and C.Nivs and all three apps worked as expected again. In my case a simple upgrade of zsh was enough. No need to reinstall and unlink.

After searching for a long time, this solved it for me:

I had the same issue and did not have an option to change the terminal on startup.

I ended up doing the following steps to resolve the problem:

If you facing the issue in iTerm2. You can simply change the path of your shell. Just go to iTerm2>>Preferences>>profile>>General>>command

Click on the dropdown and select Command and enter the command

This error is raised from "ncurses"

If you are using OSX without any system manager like Conda, try:

If you are using Conda, activate your environment and try this:

Not the answer you're looking for? Browse other questions tagged terminal dyld or ask your own question.

-3
Terminal crashes on start. How to get it back up?

2602
How to print colored text to the terminal
6
not able to use svn command from terminal in Mac OS 10.8
5
dyld: Library not loaded: /usr/lib/libnetsnmp.25.dylib
0
DYLD: Incompatible library version for cmake
1
Trying to start my server on a Node project, but getting this error
2467
Git is not working after macOS Update (xcrun: error: invalid active developer path (/Library/Developer/CommandLineTools)