Get TFS to ignore my packages folder

I'm trying to get TFS (2013) to ignore my packages folder. I passionately don't want it source controlled as I'm using NuGet and it's great!

I've tried cloaking (doesn't seem to work), I've tried adding .tfignore files - nothing is ignored. Why don't the TFS team just add an option to permanently ignore a folder or file like lots of the Subversion clients do?!

Here's the deal: We have to tell both NuGet and TFS to ignore the packages, because NuGet is trying to do source-control related stuff that it absolutely shouldn't be doing (bad form, Microsoft!). So you have to do two things.

First, add a file named .tfignore to the solution folder (note the lack of s after the tf). Its contents should be as follows:

That tells TFS to ignore your packages folder. Now, you would think that this would also ignore the repositories.config file. But it won't. Why? Who knows, the ways of Microsoft are strange and mysterious. Actually, I think it's part of the NuGet stuff I outline below, but if that ever gets fixed in the future and you want to keep the repositories.config file instead of letting VS regenerate it, you should be able to use this:

OK, so now thanks to our .tfignore file, TFS is ignoring your packages. Everything is fine, right? WRONG, because NuGet is mucking around with your source control and adding the packages to your pending changes. So now let's tell NuGet to cut it out already.

Create a folder called .nuget in the root of your solution folder.1 Now, create a file called NuGet.config, and put it in this new folder2. Its contents should look like this:

And now your packages should stay out of source control. Just remember to add the NuGet.config and .tfignore files to source control so they never get lost.

EDIT: If you're having issues, you may want to delete your packages folder, check in that change, and then go through the steps above.

ALSO EDIT: It looks like this won't happen with newer versions of Nuget. So maybe if you switch to VS/TFS 2017 this issue will clear up without jumping through the above hoops.

1. Add the folder using Source Control Explorer; right-click the solution->Add folder->.nuget
2. When I figured this out using VS 2013, I found the NuGet.config had to go in the .nuget folder. Even if you already have a NuGet.config file in the root of your solution folder (because, say, your company has an internal nuget feed). However, some in the comments have indicated that it works fine in the solution root in VS 2015. Personally, I switched to using TFS in git mode, so I can't test. Additionally, if you do have a custom feed, ensure that you have both the custom feed and nuget.org as keys in the Nuget.config file, or sometimes TFS will randomly decide it can't restore the packages.

An alternative solution to the above is the following.

It is worth noting that this solution would need to be applied per TFS workspace. It has worked far more reliably for me rather than using the .tfignore file.

You can read more about this approach in the blog article Prevent TFS from adding installed NuGet packages to source control.

for people reporting that the .tfignore option wasn't working with the nuget.config setting it might be of interest - these steps finally worked for me:

The disableSourceControlIntegration is what makes the trick for TFS Version Control.

You need to be using local workspaces for .tfignore to work. The .tfignore file must be in the folder that contains the files or folders you want to ignore.

The contents of the .tfignore in your case would be:

Here's some documentation for you: http://msdn.microsoft.com/library/vstudio/ms245454(v=vs.110).aspx#tfignore

You can permanently set this once-off in your AppData\Roaming for all solutions (old & new)!

In your %AppData%\NuGet\NuGet.Config file, add the following just before the </configuration> XML tag...

...you can specify any path you want - the important thing is putting it OUTSIDE your TFS workspace!

Now you never have to worry about that stuff again. Your solution folder will not contain any packages anymore; all solutions will default to using your custom packages location instead.

NOTE - This works is on a per-user basis.

Set your solution to restore on build, the package folder and packages file will be checked in but the packages won't.

If you are using Git with TFS you need to add a ".gitignore" file. You can do this in "team project | Settings | 'add ignore file'". Then open the file and uncomment the built in ignore statement for Nuget Packages.

If you are using TFVC and you have Local Workspaces configured you can use the ".tfignore" file that honours an identical format to the Git file. I think you need "packages/".

This didn't work for me quite on visual studio online and VS2013. 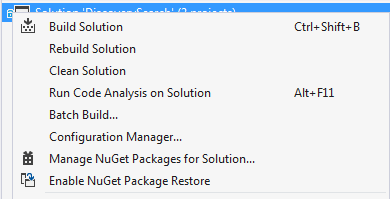 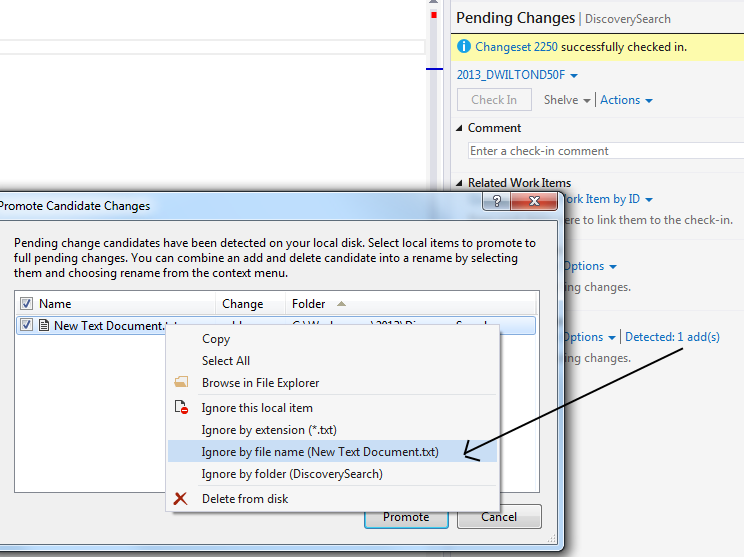 From the other comments it seems your milage may vary at this point. This is what I do:

The solution that worked for me was to create both a .tfignore and the following setting in the Nuget.Config:

My .tfignore contains this line:

This is not ideal, and is currently logged as an open issue on github/nuget:

Make it easier to omit packages from TFVC #493

Terje's answer doesn't work all the time for me, sometimes it will work for a while, but then it will pend a load of "adds" for me all over again.

The only way I have found to solve this permanently is to Cloak the packages folder in my Workspace.

I had the same issue. /packages should work but didn't for me. packages*.* did work.

Not the answer you're looking for? Browse other questions tagged tfs nuget or ask your own question.

23
TFS/VS 2013 - Ignore ALL NuGet packages
73
NuGet - repositories.config
30
tfIgnore does not work for me in Visual Studio 2013
5
Team Foundation Server 2010 Not Honoring My .tfignore file
0
Nuget: Failed to add reference to 'EntityFramework'
2
TFS: Why is Cloak grayed out?
0
Check in packages folder contents
1
TFS Solution Check in error Could not find a part of the path
1
Should TFS be storing JavaScript packages installed via NuGet in Source Control?
1
How do I stop TFS constantly trying to add nuget packages folder?
See more linked questions