Xcode 6 allows VECTOR image assets… how to use them?

I was fiddling with Xcode 6 vs images assets when I noticed something very interesting: we now can specify vector images in them (go see in the Utilities pane after selecting Images.xcassets).

I tried a small app (containing a big UIImageView) with a .SVG image (didn't work), then a .EPS (didn't work either) and I finally tried a .PDF It worked! Well, although I saw the image, It appeared pixellated and not vectorized.

So it seems Apple is preparing the way for vector icons/images. No more zillions versions of app icons, no more "@2x" images. But can anyone unlock that feature?

Here're some of my thoughts after some experiments on vector assets:

After several trials, I believe that it's just a compile time support. Xcode generate all the 1x, 2x and 3x images at compile time. Which means it works with older iOS versions. At the same time, it means that in the final build, it's still in PNG format, and you cannot get lager lossless image from the vector file.

2. Why PDF instead of SVG or other formats

For SVG and other formats, the vector image has no actual size info, while PDF has size info. I think what Xcode 6 does is using the size info in PDF as actual display size, then generate 2x 3x files from the vector image. 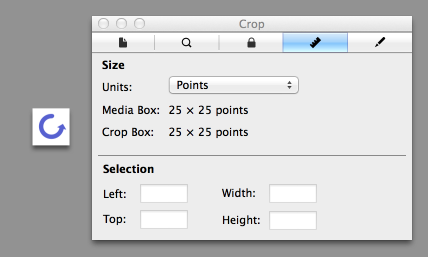 3. File size of PDF does not matter

At the begining, our concern is that PDF will be much bigger than PNGs. We tried http://smallpdf.com/ to compress it and it work pretty well. But if the original PDF file is not included in the build as I said before, then the file size of PDF does not matter.

Will continue editing this post if I find any other things.

@mredig mentioned that for iOS, it generates bitmaps at compile time, but for OSX it includes the vector image in a scalable form.

Here's how to experiment with vector images in the asset catalog in Xcode 6:

Now, wherever that image is used, it is sized to its context (e.g. a fixed-size image view) without rasterization, as shown in this screen shot: 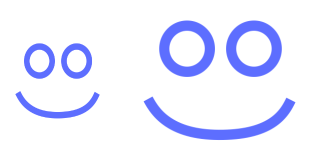 EDIT Despite this answer, the larger PDF drawing was rasterizing. But now, see https://stackoverflow.com/a/45623000/341994 : in Xcode 9, the vector PDF scales properly, without rasterizing.

EDIT In Xcode 11, this formula works: In the asset catalog, you must set the Scales pop-up menu to Individual Scales and put the vector-based image into the 1x slot. Check Preserve Vector Data. Done.

3- copy to your xcode project

8- drag and drop your pdf image there

9- use it in your project

one tip - create PDF @2x resolution and file name with @2x (myfile@2x.pdf) do this and you get perfect sharpen and contrast images, special for iPad 2 and mini.

I just create a custom font with say, icons or even app logotypes and use it that way and pull it into my app. I can then adjust font sizes for devices and screen resolutions really easily.

If you're looking for an answer to the question: "How can I use vector graphics in my iOS app and always scale them with beautiful perfection?", then I can highly recommend UIImage+PDF from https://github.com/mindbrix/UIImage-PDF

I find this works absolutely brilliantly. Instead of having all images in PNG format of three different resolutions, I now have a tiny little PDF file for each image. I can display these as follows:

I'm using UIImage+PDF for all images that can be vectorized, and only use PNGs still for photo images.

I'm also running my PDF files through something like http://smallpdf.com/compress-pdf, to ensure the smallest file sizes for them.

In cases where you are building app icons, PDF won't work. You might want to take a look at a project I just built a project called Speculid. It can build PNG, PDF, etc... from source images including SVG files. Feedback would be greatly appreciated.

Not the answer you're looking for? Browse other questions tagged vector-graphics ios8 xcode6 or ask your own question.

320
How do I create a category in Xcode 6 or higher?
143
Xcode 6 - How to pick signing certificate/provisioning profile for Ad-Hoc distribution?
84
How to use Charles Proxy on the Xcode 6 (iOS 8) Simulator?
16
iOS 8 action extension icon is blank on device (works in simulator)
183
How do vector images work in Xcode (i.e. pdf files)?
1
Set Colour Of Vector Image In Xcode 6+
14
UIImage using contentsOfFile
2
iOS 9 UISegmentedControl with vector image stretched
9
How to import vector images into image assets in xcode 8
17
Xcode 11 PDF image assets “Preserve Vector Data” not working in SwiftUI?