I'm having a problem building Docker images on my corporate network. I'm just getting started with Docker, so I have the following Dockerfile for a hello-world type app:

This works fine when I build it on my laptop at home, on my own wireless network. It pulls down the requisite dependencies and builds the image correctly.

However, when I'm on my corporate network at work, this same docker build fails when trying to pull down the RPM from download.fedoraproject.org, with this error message:

I don't have the network know-how to figure out what's going on here. Does anyone know why this strange behaviour would be occurring when building Docker containers?

I was able to figure out the issue. On Ubuntu, Docker sets the DNS servers for container to Google's servers at 8.8.8.x. As I understand it, this is a workaround on Ubuntu due to the fact that Ubuntu sets /etc/resolv.conf to be 127.0.0.1.

Those Google servers weren't accessible from behind our firewall, which is why we couldn't resolve any URLs.

The fix is to tell Docker which DNS servers to use. This fix depends on how you installed Docker:

If you have the Ubuntu package installed, edit /etc/default/docker and add the following line:

You can add as many DNS servers as you want to this config. Once you've edited this file you'll want to restart your Docker service:

If you've installed Docker via the binaries method (i.e. no package), then you set the DNS servers when you start the Docker daemon:

I advise changing the DNS settings of the Docker daemon. You can set the default options for the docker daemon by creating a daemon configuration file at /etc/docker/daemon.json. Set DNS server according to your host machine, e.g. my DNS server is 10.0.0.2:

The following steps works for me ( for both docker build and docker run command). My linux version is Ubuntu 14.04.

For any Linux distribution working with SystemD (Ubuntu 16, RHEL 7...), the path will be displayed with the following command:

The path would be /lib/systemd/system/docker.service. Add the DOCKER_OPTS values, which can have any of the --dns, in the line where the daemon is started.

Docker (at least >=1.13, probably earlier) on Mac and Windows allow you configure the DNS in Preferences -> Daemon -> Advanced:

The following config sets two corporate DNS servers (use your own values here) with fallback to Google public DNS servers. 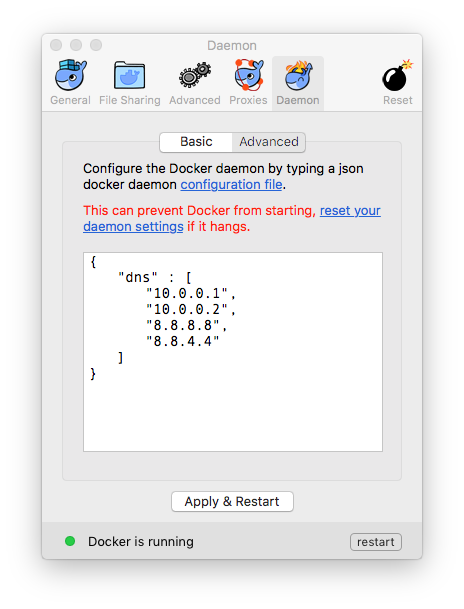 Specify your DNS to the Docker daemon.

First of all get your DNS address

If this solves the problem, you can apply this fix for all the docker daemons in the following way

Edit or create a file /etc/docker/daemon.json

Add the following line to this file

A very nice guide for doing ALL this process can be found here.

It is possible to modify the DNS settings for a single Docker image without affecting other docker build calls (and without restarting the Docker service) by overriding the resolv.conf at build time:

On my Ubuntu 16.04 machine, sometimes, Google's DNS do not work for building Docker images.

and add it to my daemon.json as show below

Not the answer you're looking for? Browse other questions tagged dns docker or ask your own question.

2
Error while running fabcar sample in javascript
0
Getting Error while building my docker file
37
Temporary failure in name resolution [Errno -3] with Docker
36
Docker apt-get update fails
15
Set DNS options during docker build
9
Docker container can only access internet with --net=host
1
Using docker behind a proxy on an EC2 instance
6
Docker containers can't access local network DNS
1
How do I get the address of the host when using 'docker build'?
2
The command '/bin/sh -c apk add … returned a non-zero code: 6
See more linked questions