Is the precompile header no longer needed ?

Where should I write the code that was in ProjectName-Prefix.pch before ?

I suspect because of modules, which remove the need for the #import <Cocoa/Cocoa.h>.

The prefix header was necessary for things that are huge and used by nearly everything in the whole system (like Foundation.h). If you have something that huge and ubiquitous, you should rethink your architecture. Prefix headers make code reuse hard, and introduce subtle build problems if any of the files listed can change. Avoid them until you have a serious build time problem that you can demonstrate is dramatically improved with a prefix header.

In that case you can create one and pass it into clang, but it's incredibly rare that it's a good idea.

EDIT: To your specific question about a HUD you use in all your view controllers, yes, you should absolutely import it into every view controller that actually uses it. This makes the dependencies clear. When you reuse your view controller in a new project (which is common if you build your controllers well), you will immediately know what it requires. This is especially important for categories, which can make code very hard to reuse if they're implicit.

The PCH file isn't there to get rid of listing dependencies. You should still import UIKit.h or Foundation.h as needed, as the Xcode templates do. The reason for the PCH is to improve build times when dealing with really massive headers (like in UIKit).

Without the question if it is proper or not, you can add PCH file manually: 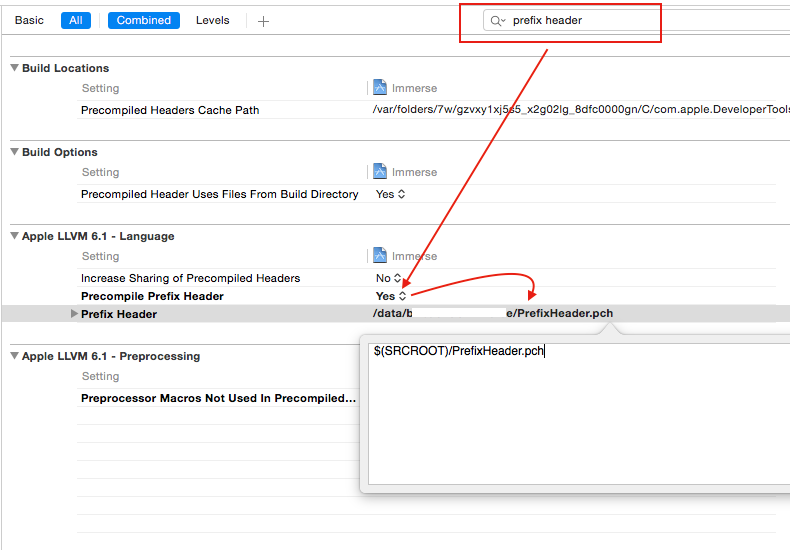 I'll show you with a pic!

3) Search "prefix header". You can find that under Apple LLVM.

4) Paste this in the field $(SRCROOT)/yourPrefixHeaderFileName.pch

If you decide to add a .pch file manually and you want to use Objective-C just like before xCode 6 you will also have to import UIKit and Foundation frameworks in the .pch file. Otherwise you will have to import these frameworks manually in each header file. You can add the following code anyway as it tests for the language used:

(2) add path of this PCH file to your Project - BuildSetting - Apple LLVM 6.0 Language

Not the answer you're looking for? Browse other questions tagged ios xcode xcode6 or ask your own question.

245
Swift to Objective-C header not created in Xcode 6
447
How to print out the method name and line number and conditionally disable NSLog?
181
PCH File in Xcode 6
138
Adding Core Data to existing iPhone project
38
Failed to emit precompiled header for bridging header
36
Global log level for CocoaLumberjack
24
Difference between NSLog and DLog
16
Why .pch file not available in swift?
10
Xcode 6 - Template without Storyboards
11
Should I remove NSLogs when releasing my App
See more linked questions

1726
How can I make a UITextField move up when the keyboard is present - on starting to edit?
170
Archiving project in Xcode incorrectly creates multi-application bundle
183
Where is Xcode's build folder?
558
Should IBOutlets be strong or weak under ARC?
250
Is it possible to install iOS 6 SDK on Xcode 5?
951
Swift Beta performance: sorting arrays
252
What is “Constrain to margin” in Storyboard in Xcode 6
56
Xcode not automatically creating bridging header?
349
How to program a delay in Swift 3
354
After upgrading to Xcode 11.2 from Xcode 11.1, app crashes due to _UITextLayoutView