Does Swift have a #warning equivalent? It's simply used to show a warning in Xcode's own GUI

I'm also interested in whether there's a #error equivalent.

Apple has said #pragma mark is coming soon, it could possibly be the same with this.

As of Swift 4.2, language level support is available for both build warnings and errors.

Quick, dirty, and oh so elegantly simple all at the same time.

You can add emoticons to the variable name if you like... I often use 😱 and 🛠, for something that really needs fixing I'd even consider 💩. You can replace FIX_ME__ with whatever you want: ALGORITHM_NEEDS_REVIEW, BugID_148, or JOHNNY_YOU_BROKE_THIS are some examples.

Quick, no setup, concise, and emoticons can even add humour/personality to your code. Sometimes the most simple solution is the best solution.

In the future, Apple devs may very well release a //WARNING: landmark, or provide the functionality for another named landmark.

To envoke this functionality with Swift in Xcode today however, you could do the following as outlined by Ben Dodson & Jeffrey Sambells:

This will force Xcode to flag a warning at compile time for any // TODO: or // FIXME: comments you markup.

Alternatively, you could amend TAGS with a custom tag: TAGS="WARNING:" in the above code which would keep the default behaviour for TODO & FIXME and would raise a compile time warning on any comments marked-up as // WARNING:.

@david-h raised a good point in his comment. If you wanted to only raise these warnings in a specific build configuration, you could do the following:

Alternatively, you could use "Release" rather than "Debug" to target production builds only.

Starting with Xcode 10 and Swift 4.2 you will now be able to use #warning again like so:

This will show up as a warning in Xcode just as expected!

This works even in combination with #if checks, for example the following will only show a warning if your target platform is iOS:

There's also #error if you want your build to fail.

In Swift using XCode 6 you can use different kinds of landmarks for different purposes. Here's what Apple says about it:

Xcode now supports //MARK:, //TODO: and //FIXME: landmarks to annotate your code and lists them in the jump bar.

So for setting a warning with a description you would use something like this:

//TODO: Clean up this code after testing

If you just want to set a short mark (assuming you will remember what to do), use this:

EDIT: These landmarks however only appear in the jump bar of XCode which might not be what you wish for and what one would expect – especially from the //TODO: and //FIXME marks. I've filed a radar on that: #17776817. Hopefully Apple will add this in the coming builds in XCode 6.

SOLUTION (EDIT 2): If you install the Swift Linter via Homebrew (run brew install swiftlint after a brew update) and add the suggested build script to your project, then you will see all your TODO and FIXME landmarks appear as warnings within Xcode. SwiftLint will even add some more warnings/errors that you can configure to fit your needs – I can only recommend using SwiftLint and it solves this problem in a great way!

Still not added by Apple team yet. What I decided to do is probably a cheating, but at least it does show me a FIXME message. So what I do is declare FIXME() function in Swift file:

and when I call it from any other function it does show a warning, e.g. 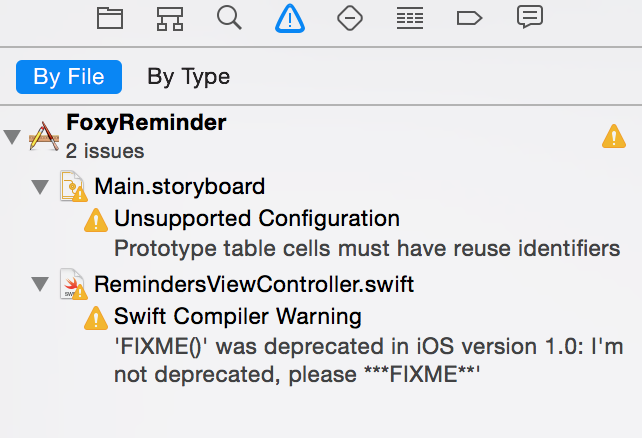 Look at this article.

You can write your own script which will highlight all tags.

As an alternative, if you want something to show up in the warnings panel, you could write something like:

You can't really get any text to show up, but at least it's a more visible marker, especially if you tend to treat (most) warnings like errors.

I proposed and implemented this feature, and it will ship with Swift 4.2. You can use it now by download the master toolchain on swift.org.

One CocoaPod that I was using had .swift in its name, so a directory was returned, which caused the script by Kyle to crash. Adding -type f to the find command fixes that problem by only looking at files that match *.swift instead of also returning directories that match the pattern.

Final code that I used:

If you’re loath to adjust your build setup, another simple home remedy is to stick an editor placeholder in front of the comment:

You get an “Editor placeholder in source file” error when you build, but unlike Jordan’s solution, there’s no live error to annoy you while typing:

After much searching and longing, I'm convinced no such entity exists. I'm still hopeful with the latest Xcode release notes mentioning the continued lack of a #pragma mark mechanism, #warning and #error may also be coming as well.

As an aside, I highly recommend filing a Radar with Apple at bugreport.apple.com to add this functionality (you can dupe 17702491).

We wrote a configurable tool that lets you put warnings and errors in Xcode Issue Navigator based on comment tag and build configuration: https://github.com/doubleencore/XcodeIssueGenerator

Then put a line in a Run Script Build Phase:

Here's an article describing how we use it.

My answer is not quite satisfy your question, but if you want something easy you can use this plugin of alcatraz which works in all the projects without any additional preparations. Just do the following:

It also has preferences for adding new tags 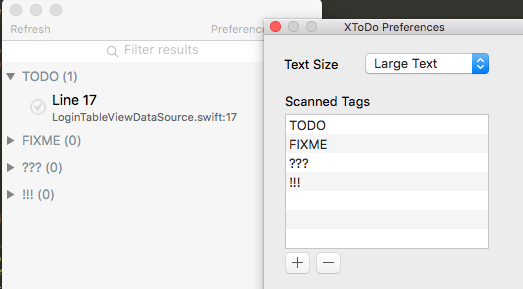 Advantage of this snippet - it doesn't show warnings from Pods: 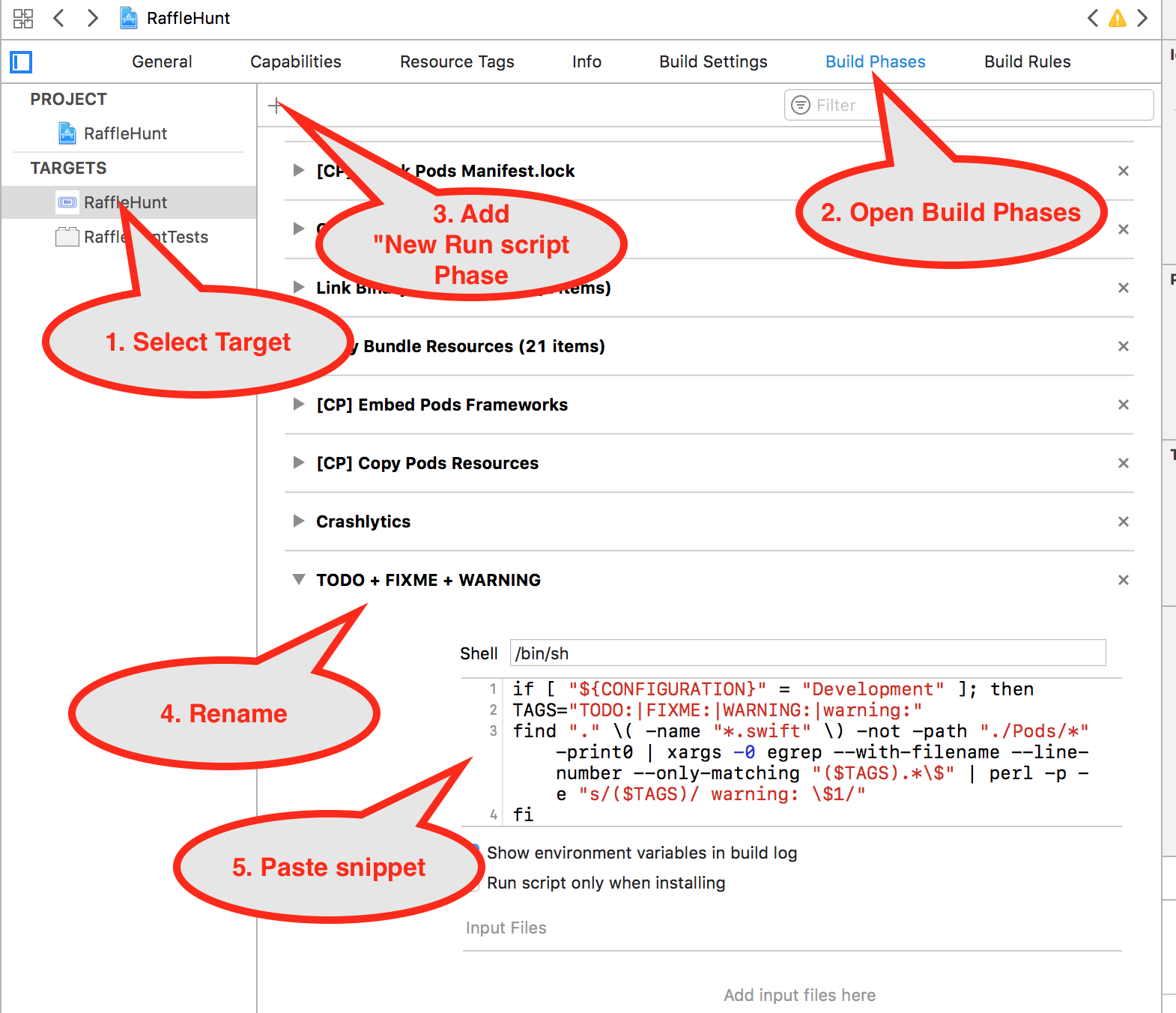 I may be late to the party with Xcode 10 supporting errors and warnings, but simply putting a String:

will produce a warning: String literal is unused with autocompletion still working and the project still compiling.

-2
How to put some notes in Xcode
0
User created warnings no longer working in XCode 7.1. Is there an alternative?
1
Xcode 6 warning directive
13
Treat *some* warnings as errors in Swift?
8
Is there a way to generate a runtime warning that Xcode 8 can pick up?
0
Swift Compiler Macro (Warn or Stop There)

1102
How do I call Objective-C code from Swift?
847
#ifdef replacement in the Swift language
691
@selector() in Swift?
1003
#pragma mark in Swift?
918
How to iterate a loop with index and element in Swift
290
How do you find out the type of an object (in Swift)?
973
Swift Beta performance: sorting arrays
151
What's the _ underscore representative of in Swift References?
220
Why is Swift compile time so slow?
788
Split a String into an array in Swift?