I have a very strange bug trying to horizontally center text in UITextField object in iOS 7+ app.

I have set up a fresh project to isolate the bug and to make sure I'm not doing something wrong.

In viewDidAppear: method I alloc/init a new UITextField instance like this:

That's all. When I run this sample app on iPhone Retina (4-inch 64-bit) simulator I get following result: 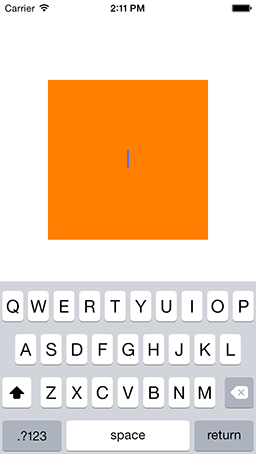 After typing in some letters I get this: 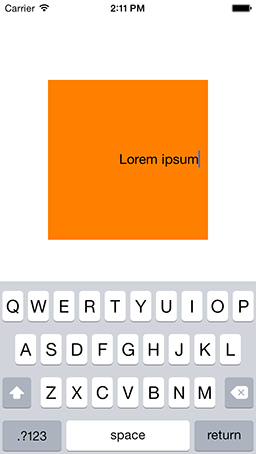 Do anyone know what's is happening? The text should be centered while typing. I didn't come across this bug till now. It is iOS related or am I doing something wrong?

P.s.: It is happening on iDevices also.

and it surprisingly works. But it doens't solve the issue. I discovered that increasing height from 20.0f up makes issue only worse. I think it has something to do with line-height/text field height ratio. I don't know..

I think UITextField expects the vertical size of the font to be equivalent to the height of the text field. If you imagine a font at a point size that will fill the vertical height of your text field at 200 points, you will only be able to type a few characters before it fills the horizontal width and switches from the centered behavior to the right-aligned behavior. This seems to be the behavior in your "bug" above, where you can only type a few characters before it switches behaviors.

I think the best thing to do is to make your text field just high enough to fit your font, and vertically center it in a containing UIView.

Not the answer you're looking for? Browse other questions tagged ios objective-c uitextfield or ask your own question.

486
Set the maximum character length of a UITextField
2286
Vertically align text to top within a UILabel
1761
How can I make a UITextField move up when the keyboard is present - on starting to edit?
581
iPhone UITextField - Change placeholder text color
272
How to create a multiline UITextfield?
430
Text inset for UITextField?
410
Set padding for UITextField with UITextBorderStyleNone
485
iOS - Dismiss keyboard when touching outside of UITextField
609
UITextField text change event
342
How do I check when a UITextField changes?