How to update system PATH variable permanently from cmd?

We can use setx as discussed here.

But this command can just make changed to user PATH variable not the system one.

How can we make a similar system wide command? 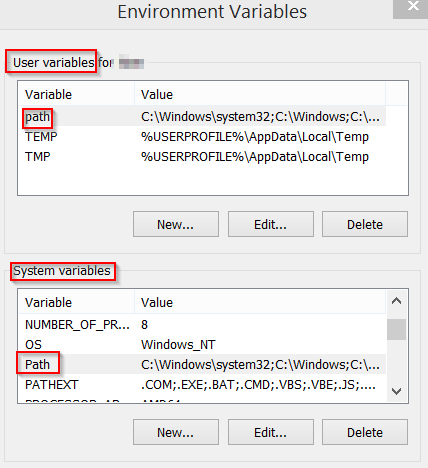 You need to run this from an elevated command prompt. Right-click the cmd shortcut and select Run as Administrator.

We may destroy the current system's PATH variable. Make sure you backup its value before you modify it.

One problem with %PATH%, is it includes the user's path. If you don't mind Powershell, you can run the following

If you want to add some location to the PATH environment variable on user level, use the following on the command line:

If you use this in a command script, you have to use double %% instead of ^%.

The " encloses a string that contains spaces. If you do not have spaces, you can omit the quotes.

The added string has to follow directly without space so the whole thing forms a single argument to the setx command.

Solution when dealing with a >1024 char path:

None of the other answers worked in my case, but using pathed did the trick. You can append to path as simply as this:

You can check if the edit happened correctly by running

PS: if you want to change the user's path instead use: pathed /append C:\Path\To\Be\Added /user and pathed /user to check if it went through correctly.

PPS: In order to be able to run pathed from terminal, you need to put the exe in a directory already on your path (or add a new directory to path, but then you you might need to open a new instance of cmd.exe in order for the new path to be recognized)

Not the answer you're looking for? Browse other questions tagged windows path cmd or ask your own question.

642
Adding a directory to the PATH environment variable in Windows
126
How to update PATH variable permanently from Windows command line?
47
How to persistently set a variable in Windows 7 from a batch file?
29
SETX doesn't append path to system path variable
2
ILDASM could not be found in the PowerShell window of Visual Studio 2019
0
How do I install cmake?
1
Call a Python script (in a directory in the PATH) from command line with Windows
0
change php version in cmd (installed xampp)

725
Batch file to delete files older than N days
1435
How do I get the filename without the extension from a path in Python?
839
Setting Windows PowerShell environment variables
956
Failed to load the JNI shared Library (JDK)
1206
How do I run two commands in one line in Windows CMD?
126
How to update PATH variable permanently from Windows command line?
642
Adding a directory to the PATH environment variable in Windows
896
Remove credentials from Git