Here is nice image which explains it. Web profile is a subset of Java EE and it's purpose is to allow developers to create more lightweight applications which can be used inside simple servlet container (like Tomcat or Jetty). 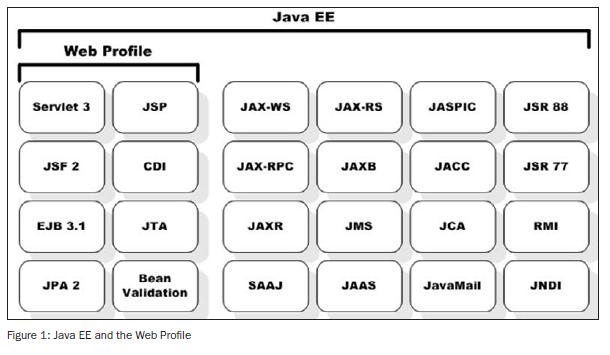 In late 2017, Oracle gave responsibility for Java EE to the Eclipse Foundation. Future versions after Java EE 8 will be known as Eclipse Enterprise For Java (EE4J). Or Project EE4J. Or maybe EE.next. Or Jakarta EE. The branding has been changing in recent months.

As part of the transition from Oracle, the Eclipse team will re-release Java EE 8 as Jakarta EE 8 using their new infrastructure for housing code and making builds. Same EE behavior, same internal naming and package structure. So the issues discussed below about Java EE Web Profile versus Java EE Full Platform will still apply.

However, the next version bringing new features (Jakarta EE 9) will likely require new naming of packages and possibly the naming of the various APIs that make up EE. So even though you will likely be able to expect upward compatibility in behavior, the naming changes will mean version 9 and later will not be a drop-in binary replacement. Not the end of the world. This may mean as little as you changing the import package names in your various class files. Read this and this for details and links.

Furthermore, the Eclipse team and Jakarta EE community will be free to re-define or re-organize the various parts of EE. So the Java EE Web Profile versus Java EE Full Platform discussion below may not apply directly to Jakarta EE 9 and later.

Another note if you are using more recent Java SE versions underlying EE… In Java SE 11, some modules are dropped. The Java EE related parts are moving to a new home at the Jakarta EE project. Others such as CORBA have been offered for adoption by any interested organization. See JEP 320.

See a list of Java EE 8 technologies published by Oracle, with links to JSRs and specs.

The following technologies are required to be present in all Java EE profiles:

The Web Profile is a specific subset of the full Java EE platform, focusing on commonly used elements. Implemented by products such as Apache TomEE or nearly so with Eclipse Jetty plus add-ons.

• Contexts and Dependency Injection for the Java EE Platform 2.0

As a lighter alternative to using a Web Profile implementation, you could start with a Java Servlet/JSP implementation such as Apache Tomcat or Eclipse Jetty. While not official as a profile, this approach is very popular. Sometimes known as a web container.

When using this setup, you may selectively add independent libraries to benefit selectively from the various Java EE technologies. For example, for my own work building web apps using the Vaadin Framework, I use Java SE rather than EE, with Tomcat, and add a Bean Validation implementation library manually as that is all I need from the Java EE list of technologies.

The following technologies are required:

• All the items in Web Profile

• EJB 3.2 (except for EJB entity beans and associated EJBQL, which have been made optional)

The following technologies are optional:

Here is a diagram to show the nested groups of requirements.

The following technologies are required:

There are no optional technologies.

The following technologies are required components of the Web Profile:

There are no optional components in the Web Profile.

Not the answer you're looking for? Browse other questions tagged jakarta-ee or ask your own question.

24
What is different about the Java EE packages? (SDK/normal vs Web Profile)
-2
Difference between javaee api , javax-servlet-api, javaee-web-api?
442
What is the difference between Tomcat, JBoss and Glassfish?
214
What is Java EE?
155
What exactly is Java EE?
58
Why use Glassfish instead of Apache? What's it strengths and weaknesses?
23
How would you compare Apache Tomcat & Glassfish as production servers?
26
What is the difference between javaee-api and javaee-web-api?
3
What to do when you want to create your first java web application?
0
Is Tomcat 8 an incomplete Java EE 7 Web Profile implementation?
see more linked questions…

550
.war vs .ear file
155
Performing user authentication in Java EE / JSF using j_security_check
111
Difference between an application server and a servlet container?
260
What is Java Servlet?
43
Java EE Containers vs Web Containers
8
Java EE 7 Compatible servers?
2
How to know if WildFly is running with Web Profile or Full Profile?