When writing CUDA applications, you can either work at the driver level or at the runtime level as illustrated on this image (The libraries are CUFFT and CUBLAS for advanced math): 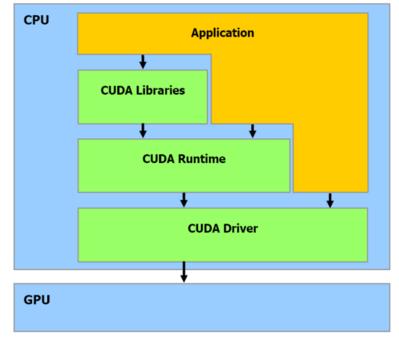 I assume the tradeoff between the two are increased performance for the low-evel API but at the cost of increased complexity of code. What are the concrete differences and are there any significant things which you cannot do with the high-level API?

I am using CUDA.net for interop with C# and it is built as a copy of the driver API. This encourages writing a lot of rather complex code in C# while the C++ equivalent would be more simple using the runtime API. Is there anything to win by doing it this way? The one benefit I can see is that it is easier to integrate intelligent error handling with the rest of the C# code.

The CUDA runtime makes it possible to compile and link your CUDA kernels into executables. This means that you don't have to distribute cubin files with your application, or deal with loading them through the driver API. As you have noted, it is generally easier to use.

In contrast, the driver API is harder to program but provided more control over how CUDA is used. The programmer has to directly deal with initialization, module loading, etc.

From the CUDA Programmer's Guide:

It is composed of two APIs:

These APIs are mutually exclusive: An application should use either one or the other.

There is no noticeable performance difference between the API's. How your kernels use memory and how they are laid out on the GPU (in warps and blocks) will have a much more pronounced effect.

I have found that for deployment of libraries in multi-threaded applications, the control over CUDA context provided by the driver API was critical. Most of my clients want to integrate GPU acceleration into existing applications, and these days, almost all applications are multi-threaded. Since I could not guarantee that all GPU code would be initialized, executed and deallocated from the same thread, I had to use the driver API.

My initial attempts with various work-arounds in the runtime API all led to failure, sometimes in spectacular fashion - I found I could repeatedly, instantly reboot a machine by performing just the wrong set of CUDA calls from different threads.

Since we migrated everything over the Driver API, all has been well.

a couple of important things to note:

in driver api you have access to functionality that is not available in the runtime api like contexts.

the emulator only works with code written for the runtime api.

oh and currently cudpp which is a very handy library only works with the runtime api.

There are some real issues with argument alignment and the driver API. Check out the CUDA 2.2 beta (or later) documentation for more information.

share|improve this answer
answered Mar 20 '09 at 16:39
RobertRobert
add a comment  |
Highly active question. Earn 10 reputation in order to answer this question. The reputation requirement helps protect this question from spam and non-answer activity.

Not the answer you're looking for? Browse other questions tagged c# c++ cuda gpgpu cuda.net or ask your own question.

4
Why should I use the CUDA Driver API instead of CUDA Runtime API?
-5
cuda runtime api and dynamic kernel definition

397
Fastest sort of fixed length 6 int array
24
CUDA driver version is insufficient for CUDA runtime version
0
cuda.net is based in CUDA Runtime or CUDA Driver?
412
How to get the cuda version?
135
How do CUDA blocks/warps/threads map onto CUDA cores?
253
What is the canonical way to check for errors using the CUDA runtime API?
4
Why should I use the CUDA Driver API instead of CUDA Runtime API?