Shall we always use [unowned self] inside closure in Swift

In WWDC 2014 session 403 Intermediate Swift and transcript, there was the following slide 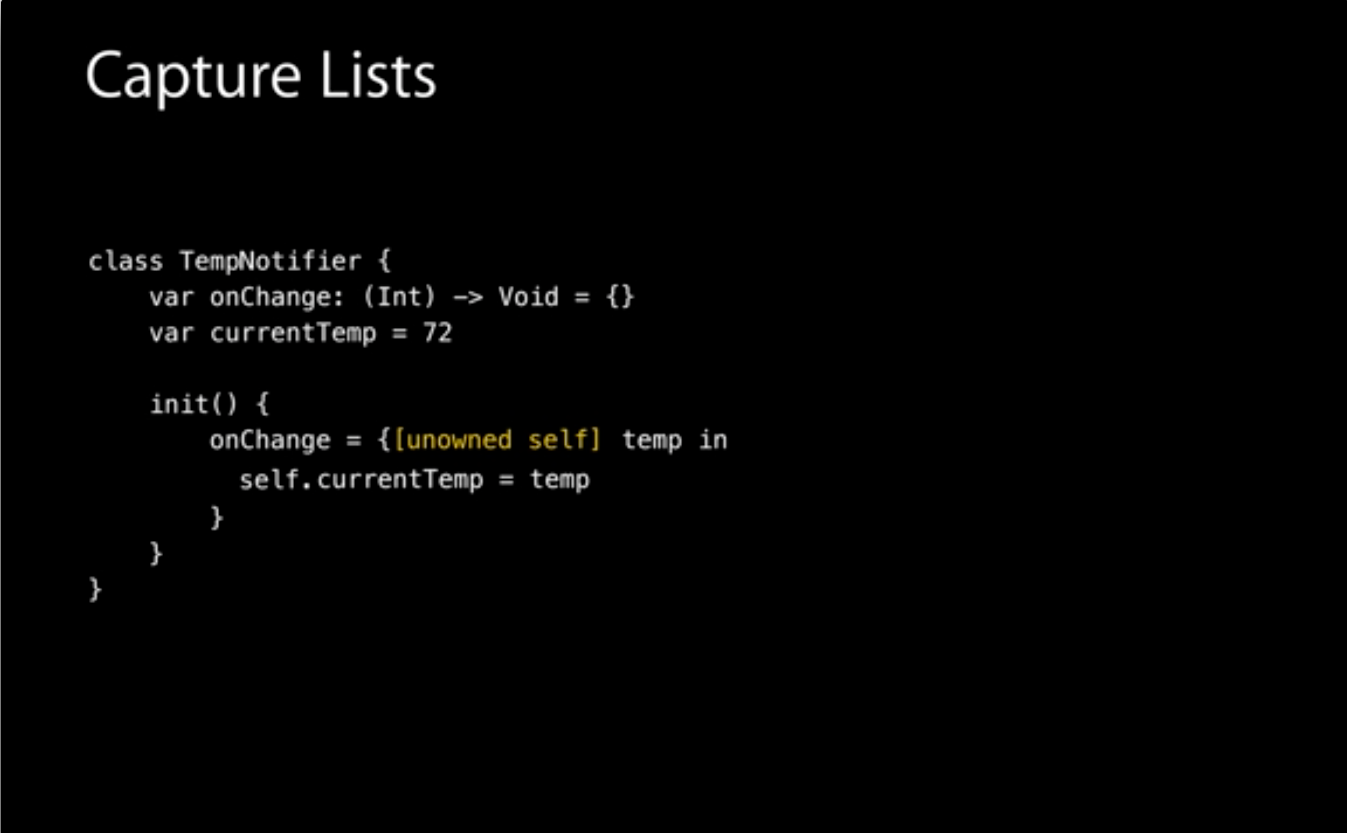 On line 64 of ViewController.swift of the Swift Weather app, I don't use [unowned self]. But I update the UI by using some @IBOutlets like self.temperature and self.loadingIndicator. It may be OK because all @IBOutlets I defined are weak. But for safety, should we always use [unowned self]?

No, there are definitely times where you would not want to use [unowned self]. Sometimes you want the closure to capture self in order to make sure that it is still around by the time the closure is called.

If you are making an asynchronous network request you do want the closure to retain self for when the request finishes. That object may have otherwise been deallocated but you still want to be able to handle the request finishing.

When to use unowned self or weak self

The only time where you really want to use [unowned self] or [weak self] is when you would create a strong reference cycle. A strong reference cycle is when there is a loop of ownership where objects end up owning each other (maybe through a third party) and therefore they will never be deallocated because they are both ensuring that each other stick around.

In the specific case of a closure, you just need to realize that any variable that is referenced inside of it, gets "owned" by the closure. As long as the closure is around, those objects are guaranteed to be around. The only way to stop that ownership, is to do the [unowned self] or [weak self]. So if a class owns a closure, and that closure captures a strong reference to that class, then you have a strong reference cycle between the closure and the class. This also includes if the class owns something that owns the closure.

Specifically in the example from the video

In the example on the slide, TempNotifier owns the closure through the onChange member variable. If they did not declare self as unowned, the closure would also own self creating a strong reference cycle.

Difference between unowned and weak

The difference between unowned and weak is that weak is declared as an Optional while unowned is not. By declaring it weak you get to handle the case that it might be nil inside the closure at some point. If you try to access an unowned variable that happens to be nil, it will crash the whole program. So only use unowned when you are positive that variable will always be around while the closure is around

I wrote an article on this extending this answer (looking into SIL to understand what ARC does), check it out here.

The previous answers don't really give straightforward rules on when to use one over the other and why, so let me add a few things.

The unowned or weak discussion boils down to a question of lifetime of the variable and the closure that references it. 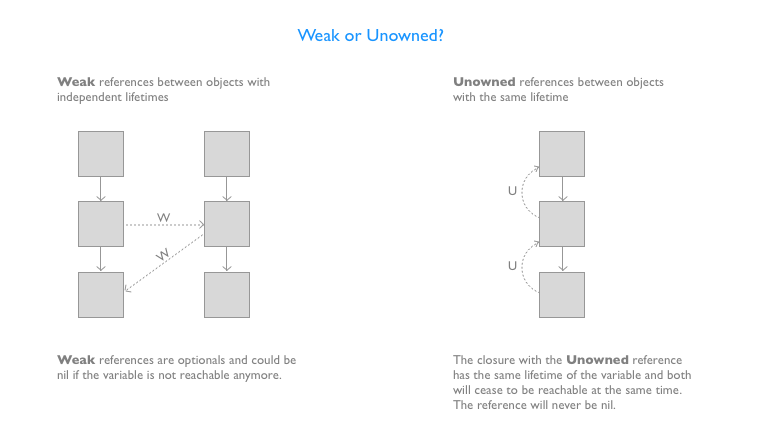 You can have two possible scenarios:

So, which will/should you actually use most of the times?

Unowned is faster and allows for immutability and nonoptionality.

If you don't need weak, don't use it.

* Usually also referred to as unowned(safe) to indicate that runtime checks (that lead to a crash for invalid references) are performed before accessing the unowned reference.

I thought I would add some concrete examples specifically for a view controller. Many of the explanations, not just here on Stack Overflow, are really good, but I work better with real world examples (@drewag had a good start on this):

If self could be nil in the closure use [weak self].

If self will never be nil in the closure use [unowned self].

The Apple Swift documentation has a great section with images explaining the difference between using strong, weak, and unowned in closures:

unowned(safe) is a non-owning reference that asserts on access that the object is still alive. It's sort of like a weak optional reference that's implicitly unwrapped with x! every time it's accessed. unowned(unsafe) is like __unsafe_unretained in ARC—it's a non-owning reference, but there's no runtime check that the object is still alive on access, so dangling references will reach into garbage memory. unowned is always a synonym for unowned(safe) currently, but the intent is that it will be optimized to unowned(unsafe) in -Ofast builds when runtime checks are disabled.

Update: In modern Swift weak internally uses the same mechanism as unowned does. So this comparison is incorrect because it compares Objective-C weak with Swift unonwed.

What is the purpose of keeping the memory alive after owning references reach 0? What happens if code attempts to do something with the object using an unowned reference after it is deinitialized?

The memory is kept alive so that its retain counts are still available. This way, when someone attempts to retain a strong reference to the unowned object, the runtime can check that the strong reference count is greater than zero in order to ensure that it is safe to retain the object.

All resources owned by the object are released as soon as the object's last strong reference is released, and its deinit is run. Unowned references only keep the memory alive—aside from the header with the reference counts, its contents is junk.

There are some great answers here. But recent changes to how Swift implements weak references should change everyone's weak self vs. unowned self usage decisions. Previously, if you needed the best performance using unowned self was superior to weak self, as long as you could be certain that self would never be nil, because accessing unowned self is much faster than accessing weak self.

But Mike Ash has documented how Swift has updated the implementation of weak vars to use side-tables and how this substantially improves weak self performance.

Now that there isn't a significant performance penalty to weak self, I believe we should default to using it going forward. The benefit of weak self is that it's an optional, which makes it far easier to write more correct code, it's basically the reason Swift is such a great language. You may think you know which situations are safe for the use of unowned self, but my experience reviewing lots of other developers code is, most don't. I've fixed lots of crashes where unowned self was deallocated, usually in situations where a background thread completes after a controller is deallocated.

Bugs and crashes are the most time-consuming, painful and expensive parts of programming. Do your best to write correct code and avoid them. I recommend making it a rule to never force unwrap optionals and never use unowned self instead of weak self. You won't lose anything missing the times force unwrapping and unowned self actually are safe. But you'll gain a lot from eliminating hard to find and debug crashes and bugs.

unowned is similar to weak they don't a retained object from being destroyed, but weak variables turned to nil when the object its a reference to no longer exists, which we can handle with the normal checking of nils, unowned will just become garbage, you can't tell they are no longer garbage and using them will crash. The problem with weak is if an object has references to it by weak variables, when its destroyed, it has to go through every reference to it and set that variable to nil, this clearly is going to be expensive, using unowned instead is going just crash and finding this kind of bug is going to be difficult. One place to use unowned is if you are creating some carefully contained datatype, which has a clear interface, and its internals are not directly accessible, for you implementation it may be useful to have lots of circular references but that are self contained, you can used unowned references to let you break those circular references, with out the expense of weak variables, for example you may have a node tree, and each node needs has to have a reference to its parent, deleting a node is going to delete all its children, so there is no point of all the children having to have all there parent references set to nil.

If none of the above makes sense:

Just like an implicitly unwrapped optional, If you can guarantee that the reference will not be nil at its point of use, use unowned. If not, then you should be using weak.

I retrieved the following below at: weak unowned link. From what I gathered, unowned self can't be nil but weak self can be, and unowned self can lead to dangling pointers...something infamous in Objective-C. Hope it helps

"UNOWNED Weak and unowned references behave similarly but are NOT the same."

This is where it gets a little confusing.

Weak and unowned references both do not increase retain counts.

They can both be used to break retain cycles. So when do we use them?!

According to Apple's docs:

“Use a weak reference whenever it is valid for that reference to become nil at some point during its lifetime. Conversely, use an unowned reference when you know that the reference will never be nil once it has been set during initialisation.”

Not the answer you're looking for? Browse other questions tagged swift automatic-ref-counting or ask your own question.

2
Why [weak self] is not required for @nonescaping closure?
0
iOS - When to keep a strong reference to self inside a closure or bloc?
1
When using self in the completion block, does it always have a memory leak in Swift?
262
What is the difference between a weak reference and an unowned reference?
38
Alamofire : How to handle errors globally
53
Should self be captured as strong in a UIAlertAction's handler?
25
How do you get a signal every time a UITextField text property changes in RxSwift
44
'[weak self]' in RXSwift closures
44
Swift Struct Memory Leak
10
What is the correct way of use strongSelf in swift?
See more linked questions

261
Always pass weak reference of self into block in ARC?
275
Can't use Swift classes inside Objective-C
4
Trying to access an unowned reference in Swift always causes the app to crash
6
Swift ARC and blocks
13
Swift Closures - Capturing self as weak
6
Weak reference to closure in Swift
12
Swift closures [weak self] and async tasks
8
Weak self in closures and consequences example
493
The use of Swift 3 @objc inference in Swift 4 mode is deprecated?
16
Why would I ever use unowned self?