I'm pretty new to the Spring Framework, I've been playing around with it and putting a few samples apps together for the purposes of evaluating Spring MVC for use in an upcoming company project. So far I really like what I see in Spring MVC, seems very easy to use and encourages you to write classes that are very unit test-friendly.

Just as an exercise, I'm writing a main method for one of my sample/test projects. One thing I'm unclear about is the exact differences between BeanFactory and ApplicationContext - which is appropriate to use in which conditions?

In addition to answering "which should I use in a main() method", are there any standards or guidelines as far as which implementation I should use in such a scenario? Should my main() method be written to depend on the bean/application configuration to be in XML format - is that a safe assumption, or am I locking the user into something specific?

And does this answer change in a web environment - if any of my classes needed to be aware of Spring, are they more likely to need ApplicationContext?

Thanks for any help. I know a lot of these questions are probably answered in the reference manual, but I'm having a hard time finding a clear breakdown of these two interfaces and the pros/cons of each without reading thru the manual with a fine-tooth comb.

The spring docs are great on this: 3.8.1. BeanFactory or ApplicationContext?. They have a table with a comparison, I'll post a snippet:

So if you need any of the points presented on the Application Context side, you should use ApplicationContext.

Spring sets properties and resolves dependencies as late as possible, when the bean is actually created. This means that a Spring container which has loaded correctly can later generate an exception when you request an object if there is a problem creating that object or one of its dependencies. For example, the bean throws an exception as a result of a missing or invalid property. This potentially delayed visibility of some configuration issues is why ApplicationContext implementations by default pre-instantiate singleton beans. At the cost of some upfront time and memory to create these beans before they are actually needed, you discover configuration issues when the ApplicationContext is created, not later. You can still override this default behavior so that singleton beans will lazy-initialize, rather than be pre-instantiated.

Given this, I initially chose BeanFactory for use in integration/performance tests since I didn't want to load the entire application for testing isolated beans. However -- and somebody correct me if I'm wrong -- BeanFactory doesn't support classpath XML configuration. So BeanFactory and ApplicationContext each provide a crucial feature I wanted, but neither did both.

Near as I can tell, the note in the documentation about overriding default instantiation behavior takes place in the configuration, and it's per-bean, so I can't just set the "lazy-init" attribute in the XML file or I'm stuck maintaining a version of it for test and one for deployment.

What I ended up doing was extending ClassPathXmlApplicationContext to lazily load beans for use in tests like so:

Spring provides two kinds of IOC container, one is XMLBeanFactory and other is ApplicationContext. 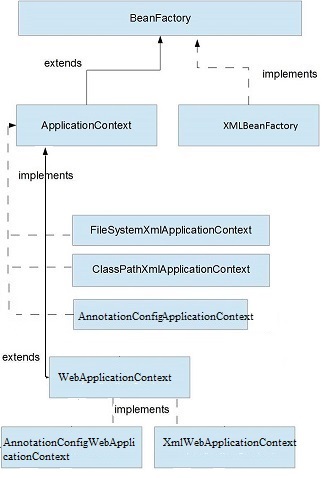 To add onto what Miguel Ping answered, here is another section from the documentation that answers this as well:

Short version: use an ApplicationContext unless you have a really good reason for not doing so. For those of you that are looking for slightly more depth as to the 'but why' of the above recommendation, keep reading.

Even if you don't use all the stuff ApplicationContext offers, it's better to use it anyway, and then later if you decide to use some resource stuff such as messages or post processors, or the other schema to add transactional advices and such, you will already have an ApplicationContext and won't need to change any code.

ApplicationContext: It loads spring beans configured in spring configuration file,and manages the life cycle of the spring bean as and WHEN CONTAINER STARTS.It won't wait until getBean("springbeanref") is called.

For the most part, ApplicationContext is preferred unless you need to save resources, like on a mobile application.

If your developing a web app, it's safe to say you'll need to use XmlWebApplicationContext.

BeanFactory and ApplicationContext both are ways to get beans from your spring IOC container but still there are some difference.

BeanFactory is the actual container which instantiates, configures, and manages a number of bean's. These beans are typically collaborate with one another, and thus have dependencies between themselves. These dependencies are reflected in the configuration data used by the BeanFactory.

A BeanFactory is represented by the interface "org.springframework.beans.factory" Where BeanFactory, for which there are multiple implementations.

Difference between BeanFactory and ApplicationContext are following: 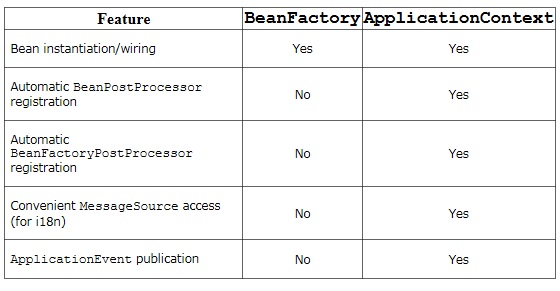 Screenshot of features of BeanFacotry and ApplicationContext

Basically we can create spring container object in two ways

both are the interfaces

using implementation classes we can create object for spring container

coming to the differences

a. One difference between bean factory and application context is that former only instantiate bean when you call getBean() method while ApplicationContext instantiates Singleton bean when the container is started, It doesn't wait for getBean to be called.

You can use one or more xml file depending on your project requirement. As I am here using two xml files i.e. one for configuration details for service classes other for dao classes. Here ClassPathXmlApplicationContext is child of ApplicationContext.

c. BeanFactory Container is basic container, it can only create objects and inject Dependencies. But we can’t attach other services like security, transaction, messaging etc. to provide all the services we have to use ApplicationContext Container.

Refer this doc from Spring Docs:

Use an ApplicationContext unless you have a good reason for not doing so.

Because the ApplicationContext includes all functionality of the BeanFactory, it is generally recommended over the BeanFactory, except for a few situations such as in an Applet where memory consumption might be critical and a few extra kilobytes might make a difference. However, for most typical enterprise applications and systems, the ApplicationContext is what you will want to use. Spring 2.0 and later makes heavy use of the BeanPostProcessor extension point (to effect proxying and so on). If you use only a plain BeanFactory, a fair amount of support such as transactions and AOP will not take effect, at least not without some extra steps on your part. This situation could be confusing because nothing is actually wrong with the configuration.

ApplicationContext is a big brother of BeanFactory and this would all thing that BeanFactory are provide plus many other things.

In a real-time scenario, the difference between the Spring IOC Core container (BeanFactory) and Advanced J2EE container (ApplicationContext) are as follows.

I think it is worth mentioning that since Spring 3, if you want to create a factory, you can also use the @configuration annotation combined with the proper @scope

do use BeanFactory for non-web applications because it supports only Singleton and Prototype bean-scopes.

While ApplicationContext container does support all the bean-scopes so you should use it for web applications.

The ApplicationContext includes all functionality of the BeanFactory. It is generally recommended to use the former.

There are some limited situations such as in a Mobile application, where memory consumption might be critical.

In that scenarios, It can be justifiable to use the more lightweight BeanFactory. However, in the most enterprise applications, the ApplicationContext is what you will want to use.

Not the answer you're looking for? Browse other questions tagged spring managed-bean applicationcontext or ask your own question.