How to install Java 8 on Mac

I want to do some programming with the latest JavaFX, which requires Java 8. I'm using IntelliJ 13 CE and Mac OS X 9 Mavericks. I ran Oracle's Java 8 installer, and the files look like they ended up at

but previous versions are at

Not sure why the latest installer puts this in /Library instead of /System/Library (nor what the difference is). But /usr/libexec/java_home doesn't find 1.8, so all the posts I've found on how to set your current java version don't work. I've tried adding a symbolic link to make it look like 1.8 is in the /System/Library... path, but it doesn't help. /usr/libexec/java_home -V still only lists the old Java 1.6.

Oracle has a poor record for making it easy to install and configure Java, but using Homebrew, the latest OpenJDK (Java 13) can be installed with:

For the many use cases depending on an older version (commonly Java 8), the AdoptOpenJDK project makes it possible with an extra step.

Existing users of Homebrew may encounter Error: Cask adoptopenjdk8 exists in multiple taps due to prior workarounds with different instructions. This can be solved by fully specifying the location with brew cask install adoptopenjdk/openjdk/adoptopenjdk8.

To install the JDKs from AdoptOpenJDK:

Java8 is no longer available on homebrew, brew install java8 will not work.

See this commit for technical details.

Please note as well you may see issues around Cask adoptopenjdk8 exists in multiple taps. This is a known issue, currently being worked on, which you can see here:

For those who don't want to run through the details, here is a summary:

I just did this on my MBP, and had to use

in order to get java8 to install.

An option that I am starting to really like for running applications on my local computer is to use Docker. You can simply run your application within the official JDK container - meaning that you don't have to worry about getting everything set up on your local machine (or worry about running multiple different versions of the JDK for different apps etc)

Although this might not help you with your current installation issues, it is a solution which means you can side-step the minefield of issues related with trying to get Java running correctly on your dev machine!

Now, assume we have this Java file:

So we have the following file structure:

This is quite a cool way of dealing with running different versions of Java for different apps without making a complete mess of your local setup :).

Assumption: Mac machine and you already have installed homebrew.

Install cask (with Homebrew 0.9.5 or higher, cask is included so skip this step):

If you want to install/manage multiple version then you can use 'jenv':

Add the installed java to jenv:

To see all the installed java:

Above command will give the list of installed java:

Configure the java version which you want to use:

I'm having the same problem to solve, because I need to install JDK8 to run Android SDK Manager (because it seems that don't work well with JDK9). However, I tell you how I solve all problems on a Mac (Sierra).

First, you need brew with cask and jenv.

You could find other useful informations here on this Github Gist brew-java-and-jenv.md, on this blog Install multiple JDK on a Mac and on Jenv Website

If you have several Java versions on your machine and you want to choose it dynamically at runtime, i.e, in my case, I have two versions:

You can change them by modifying the /etc/profile content. Just add (or modify) the following two lines at the end of the file:

In my case, it should be like the following if I want to use:

After saving the file, please run source /etc/profile and it should work. Here are results when I use the first and second option accordingly:

The process is similar if your java folder is located in different locations.

It seems that nobody has mentioned SDK man (https://sdkman.io/) yet.

SKD man allows installing multiple versions of Java on Mac and easy switching between these versions. More information is available at https://sdkman.io/usage.

I have applications that use both Java 7 and 8 and have to go back and forth all the time.

I use this script written by Johan:

You can now set it at startup or call the script afterwards.
Install the JDK for Mac.

Use jenv https://www.jenv.be/ and homebrew.

Use the Installer, Luke

Other answers suggesting the Homebrew package manager seem a bit extreme to me. I am sure Homebrew has some good uses. But to simply run Java, installing Homebrew is a needless extra step. If you goal is simply to run Java, just download a Mac installer from a trusted source.

You have multiple sources to obtain an easy-to-use installer app to put Java on your Mac. Run the installer on your Mac just as you do for many other apps.

Here is a flowchart diagram for finding a source of Java 11, some of which also offer Java 8.

Download an installer from a vendor such as AdoptOpenJDK.net. 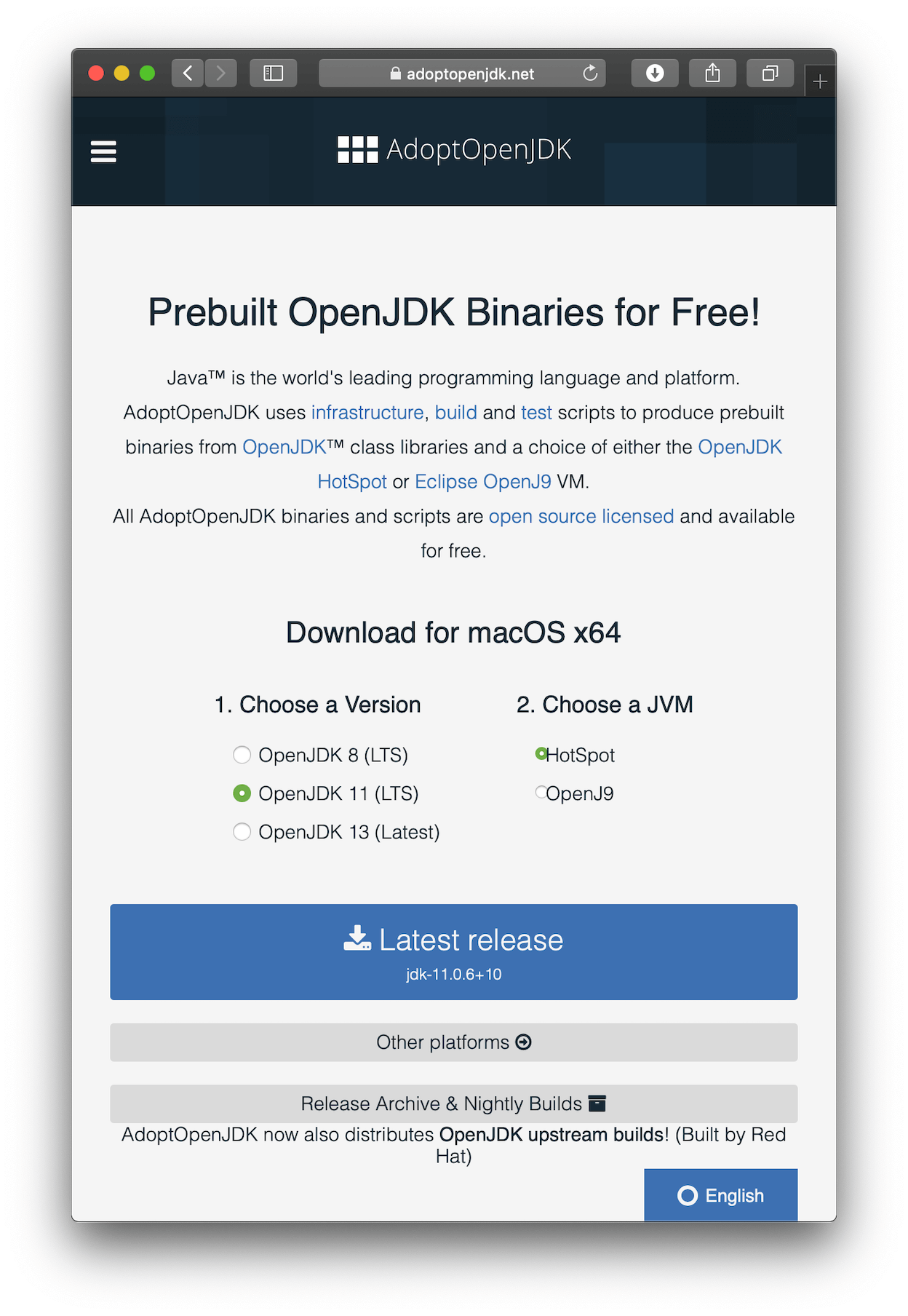 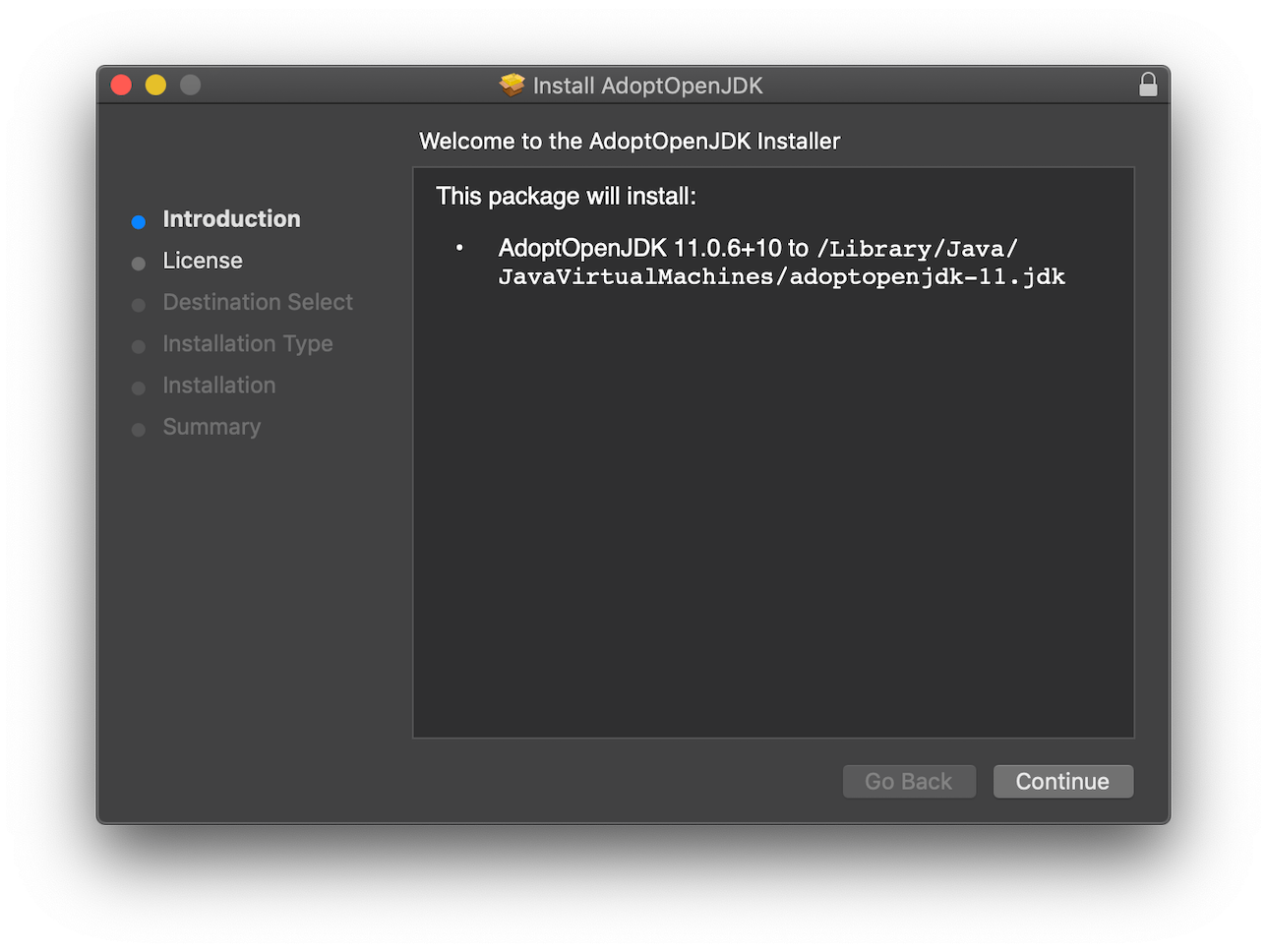 The folder /Library/Java/JavaVirtualMachines/ is the new home for JVMs on macOS.

To install a JVM, use an installer, discussed below.

To uninstall, simply use the Finder to delete a JVM from that folder. You will be prompted for system admin password to complete the removal.

Back in 2010, Apple joined the OpenJDK project, along with Oracle, IBM, Red Hat, Azul, and other Java vendors. Each member contributes source code, testing, and feedback to the unified OpenJDK codebase.

Apple contributed most of its Mac-specific code for its JVM. Now Apple no longer releases its own Mac-specific JVM. You now have your choice of JVM supplier, with builds coming from the OpenJDK codebase.

You will find source code at: http://openjdk.java.net

Be aware that in 2017, Oracle, the JCP, and OpenJDK have adopted a new rapid “release train” plan for regularly-scheduled versions of Java to be delivered in a predictable manner.

For a rather exhaustive list of past and present JVM implementations, see this page at Wikipedia.

Here is a discussion of a few vendors. See the flowchart above for more vendors

Over the years since acquiring Sun, Oracle has combined the best parts of the two JVM engines, HotSpot and JRocket, and merged them into the OpenJDK project used as the basis for their own branded implementations of Java.

Their new business plan, as of 2018, is to provide a Oracle-branded implementation of Java for a fee in production, and at no cost for use in development/testing/demo. Support for previous releases requires a paid support program. They have declared their intention for their branded release to be at feature-parity with the OpenJDK release. They have even donated their commercial add-ons such as Flight Recorder to the OpenJDK project.

Oracle also releases a build of OpenJDK with no support: http://jdk.java.net/

Both of their lines offer installers for macOS.

I am currently use Zulu for Java 10.0.1 on macOS High Sierra with IntelliJ 2018.2 and Vaadin 8. I downloaded from this page. By the way, I do not find any Java-related items installed on the Apple System Preferences app.

AdoptOpenJDK is a community-led effort to build binaries of the OpenJDK source. They intend to offer updates over time, as donated by community members.

The OpenJ9 project is an another implementation of the JVM engine, an alternative to HotSpot.

Now sponsored at the Eclipse Foundation, with technology and backing donated by IBM in 2017.

For prebuilt binaries, they refer you to the AdoptOpenJDK project mentioned above. 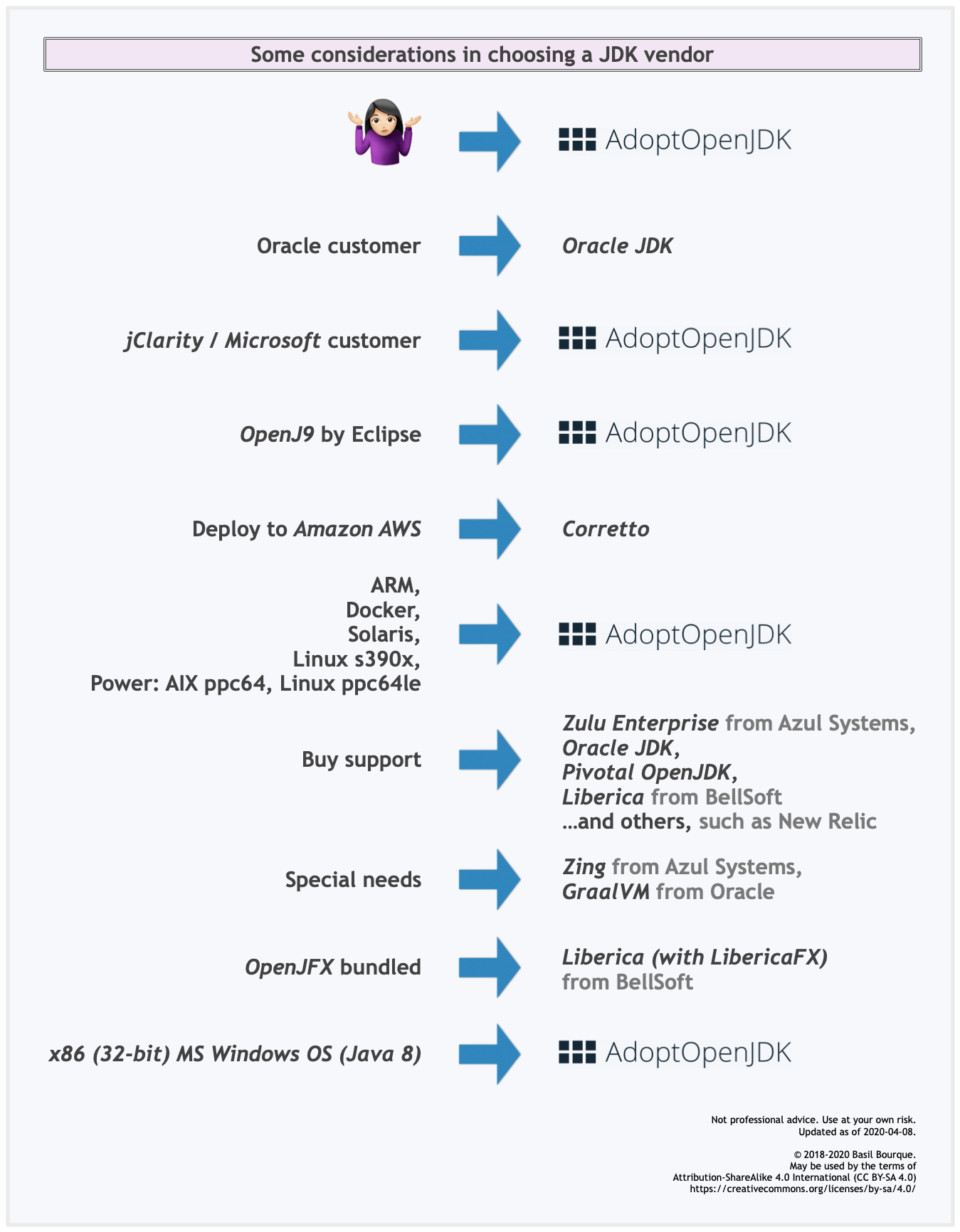 The installers provided by Oracle or by Azul are both utterly simple to operate. Just run the installer app on your Mac. A window appears to indicate the progress of the installation.

When completed, verify your JVM installation by:

After verifying success, dismount the .dmg image in the Finder. Then trash the .dmg file you downloaded.

and check with command

Best way is to use Brew package manager but the command

How did I find "caskroom/versions/java8": using brew search command:

If you are using it NOT for personal use, you might want to use OpenJDK instead to avoid any potential lawsuit from Oracle.

and update the .bash_profile with relevent version

If you are on a Mac, then Homebrew is the way to install stuff.

It seems that version 8 is no longer the most recent, so it isnt available using the default brew cask install java.

You can try this:

P.S - Cask is an extension to Homebrew that is intended to manage large Mac binaries and graphical applications, but using the Homebrew interface. Also see this answer on Apple StackExchange.

The version of Java available in Homebrew Cask previous to October 3, 2018 was indeed the Oracle JVM. Now however, it has now been updated to OpenJDK. Be sure to update Homebrew and then you will see the lastest version available for install.

1. install Homebrew if you haven't already. Make sure it is updated:

2. Add the casks tap, if you haven't already (or you are not seeing older Java versions anymore with step #3):

3. and for the AdoptOpenJDK versions, add that tap:

These casks change their Java versions often, and there might be other taps out there with additional Java versions.

or for AdoptOpenJDK versions:

5. Check the details on the version that will be installed:

or for the AdoptOpenJDK version:

6. Install a specific version of the JDK such as java11, adoptopenjdk8, or just java or adoptopenjdk for the current. For example:

You can use the fully qualified path to older versions as well:

brew cask install java 8 ,, it will give the below result

Next enter: brew cask install adoptopenjdk8 ---- java 8 will be installed in Mac.

Below steps worked for me.

In the Terminal window Copy and Paste the command below:

3) Download latest JDK from Oracle and install it , for me it was JDK 1.82

Not the answer you're looking for? Browse other questions tagged java macos java-8 installation or ask your own question.

3
What is the best way to update Java version on Mac computer?
0
sudo: update-alternatives: command not found
391
Installed Java 7 on Mac OS X but Terminal is still using version 6
176
How to extract text from a PDF file?
107
How do I use JDK 7 on Mac OSX?
45
Pyspark: Exception: Java gateway process exited before sending the driver its port number
62
Pyspark error - Unsupported class file major version
40
Failed to initialize compiler: object java.lang.Object in compiler mirror not found
28
How to install java 8 on osx macOS Mojave with homebrew?
26
Could not generate DH keypair on “Add composer dependency” in PhpStorm
See more linked questions

6563
Is Java “pass-by-reference” or “pass-by-value”?
3292
How do I efficiently iterate over each entry in a Java Map?
4059
How do I read / convert an InputStream into a String in Java?
3497
How do I generate random integers within a specific range in Java?
2193
Homebrew install specific version of formula?
2533
How to install pip on Windows?
3018
How do I convert a String to an int in Java?
3218
How to create a memory leak in Java?
391
Installed Java 7 on Mac OS X but Terminal is still using version 6
246
Removing Java 8 JDK from Mac