What are the rules for automatic generation of move operations?

But how do things change in C++11 with move semantics?

Are there cases in which move operations are not automatically generated?

Nikos Athanasiou gave a good answer but I wanted to add this tool that I think is very useful.

Here is a screenshot of Howard Hinnant's presentation "Everything You Ever Wanted To Know About Move Semantics (and then some)" from ACCU 2014 conference which I think is a very good reminder of the rules of automatic generation of special members: 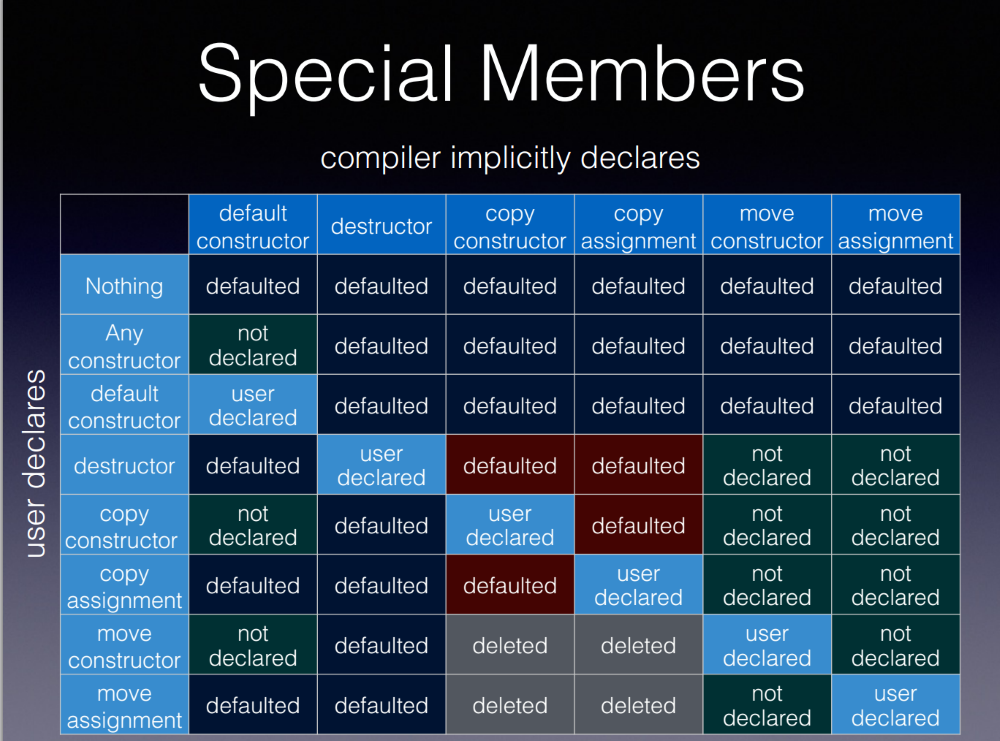 Clarification from Mr Hinnant from the comments:

I recommend reading the slides to get the progressive construction of this table and have a detailed explanation of how and why we have this now.

Other presentations can be found there: http://accu.org/index.php/articles/1901

— X does not have a user-declared copy constructor,

— X does not have a user-declared copy assignment operator,

— X does not have a user-declared move assignment operator, and

— X does not have a user-declared destructor.

Then 11 explains the rules for deleting the defaulted move constructor

11 . An implicitly-declared copy/move constructor is an inline public member of its class. A defaulted copy/ move constructor for a class X is defined as deleted (8.4.3) if X has:

— a variant member with a non-trivial corresponding constructor and X is a union-like class,

— a non-static data member of class type M (or array thereof) that cannot be copied/moved because overload resolution (13.3), as applied to M’s corresponding constructor, results in an ambiguity or a function that is deleted or inaccessible from the defaulted constructor,

— a direct or virtual base class B that cannot be copied/moved because overload resolution (13.3), as applied to B’s corresponding constructor, results in an ambiguity or a function that is deleted or inaccessible from the defaulted constructor,

— any direct or virtual base class or non-static data member of a type with a destructor that is deleted or inaccessible from the defaulted constructor, or,

— for the copy constructor, a non-static data member of rvalue reference type. A defaulted move constructor that is defined as deleted is ignored by overload resolution (13.3, 13.4).

[ Note: A deleted move constructor would otherwise interfere with initialization from an rvalue which can use the copy constructor instead. —end note ]

On the complexity of it all *

The rules can be somewhat overwhelming. It's good to use some technique to bypass the complexity. Examples are :

Not the answer you're looking for? Browse other questions tagged c++ c++11 move-semantics or ask your own question.

5
rule of five and implicitly deleted functions
10
How to find out which functions the compiler generated?
3
How could the exception specifier on move assignment operator affect that of move constructor?
11
How to forbid assignment
5
Explicit move constructor needed in container?
4
Why the below code does not compile with gcc but compiles fine with clang
10
Has it been established if move/copy constructor/assignment are "deleted" or "not declared" in C++17?
2
Object as argument desctructor called but not constructor?
2
Explicitly defaulted destructor disables default move constructor in a class
0
Move constructor for a class
See more linked questions