I'd like to use hot swap with my Spring Boot project. Somehow I am not able to make it working by running it in my IDE (IntelliJ), despite of having this topic covered by documentation. I simply run the class with my main method with VM attributes:

Further question is how to use spring loaded with Gradle and IntelliJ. I find it quite inconvenient to force the developer to download the JAR manually, place it somewhere and point to it with a JVM parameter. Is there any better way (should I configure my own task which does the job and run it from my IDE as a Gradle task)?

If one wants to be able to run the application solely from IntelliJ (using Right Click -> Debug on the main method) and not involve Spring Boot's Gradle tasks at all, you simply need to do the following: 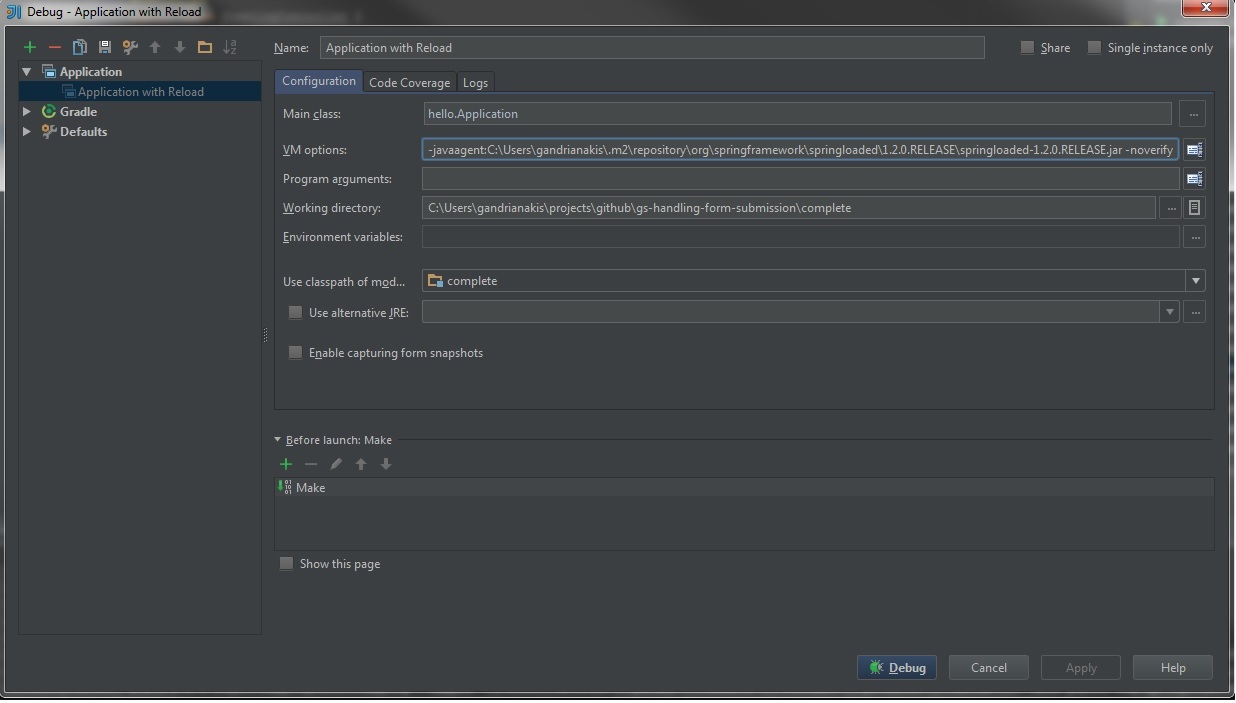 Notice how I have added a VM Option: -javaagent:/path/to/springloaded-${version}.jar -noverify (which you can download here) 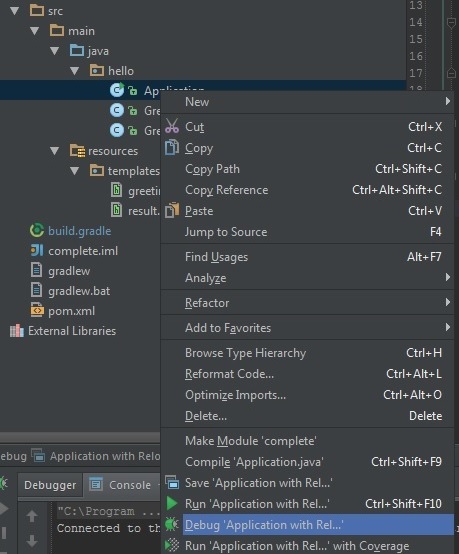 You need to configure the project as stated in the documentation:

After that, you must configure your IDE to output the compiled classes in build/classes/main (with Idea plugin, you can configure the outputDir as specified in the above link, and then invoke gradle idea to have it done).

Then, if you launch the task (run / bootRun) or run the main class from the IDE's using the debug mode, hot code reloading should work when a class is compiled.

The gotcha here is that IntelliJ, unlike Eclipse, doesn't automatically compile a class when it is saved (even if you configure the compiler to "Build on save", it won't do it when is Running/Debugging). This is apparently a design decission made by IntelliJ - as stated here Intellij IDEA Java classes not auto compiling on save (CrazyCoder answer) .

It would be ideal if spring boot provided a configuration option to monitor your source code files and recompile them when they change - that is what Grails does. But I think such a think does not exist yet, and maybe is not even possible to combine that with gradle, which is the responsible of managing the classpath and that kind of things.

So there are two options as far as I can tell:

First is tedious, second is slow :) . Actually there's another option: you change your IDE :-D (or install the EclipseMode IntelliJ plugin).

I managed to do this with IDEA in a Maven project, it should work with the Gradle version as well I guess, my procedure was the following.

Now change some code and reload the page.

And add the following:

(Not just the standard run task - this adds SpringLoaded functionality)

This will start a process that look for changes to source code and recompile them.

Any changes to java or groovy src will automatically be recomplied. While not intellij specific, your good to go with intellij. You could even make do with you favorite text editor (e.g. submlime, atom ).

Not the answer you're looking for? Browse other questions tagged spring spring-boot spring-loaded or ask your own question.

200
Intellij IDEA Java classes not auto compiling on save
18
IntelliJ IDEA "Make project automatically" woes
2
How do I get SpringLoaded to work with Maven in IntelliJ (or on the commandline)?
2
Grails 3.2.11 not reloading controllers in development
0
spring boot use springloaded no work in gradle
0
IntelliJ IDEA auto recompile changed classes (on lost focus)