gitignore does not ignore folder

The folder is checked: it exists and it has the files to be ignored. gitignore is committed. However, I have a file where I make a moification and is inside my bar folder. When I type

inside my git bash I see the file which should have been ignored. What could be the reason and how can I successfully ignore all files inside my bar folder?

Note, that the files were previously ignored with the same line, but I had to temporarily remove that line to commit something on the server. After the commit, I put back the line into the gitignore. This was a while ago, but now I have observed that the files will be in git status. I would expect to be able to modify the ignored files without they appearing in the git status.

I'm guessing this folder has been checked into git before?

For me, the accepted answer was part of the solution, not the entire solution. Maybe, the other steps that I'm about to post were obvious, but I missed them first. Here's the steps I took to ensure my .gitignore file ignored the folder I wanted it to ignore:

You can find the link to the article from where I found the solution here.

I had done echo node_modules >> .gitignore and it didn't work.

the windows terminal from saves the file in UCS-2 LE BOM and git doesn't seem to accept that. 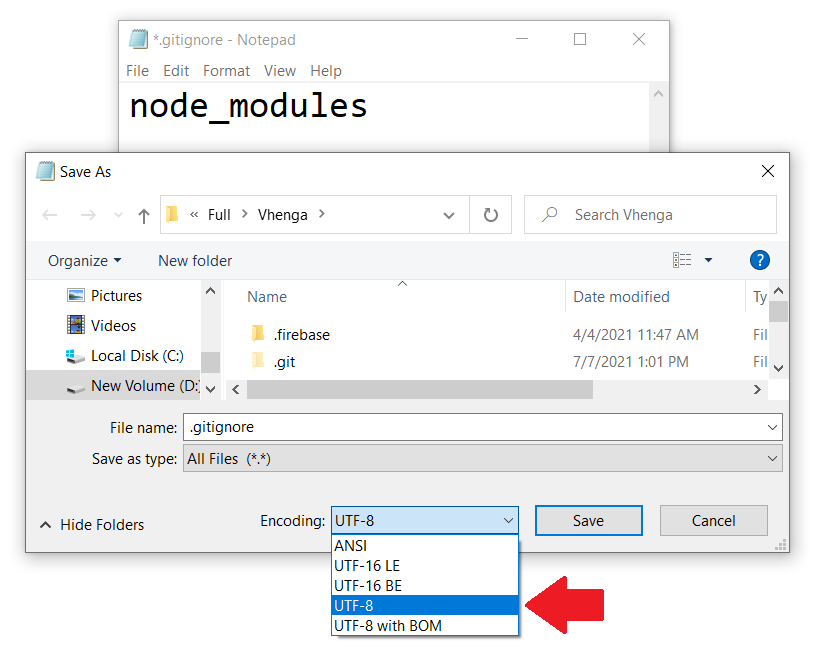 I think they need to fix this since echo "filetoignore" >> .gitignore actually seems a handy thing to do

I was having this issue and I realized git was actually ignoring the files/folders correctly, but my code editor (Visual Studio Code) was just buggy and not "greying them out" properly in the UI sidebar. I restarted VSCode and they were greyed out as expected.

As an addition to the accepted answer

When i do that, the terminal shows a bunch of rm for files in that directory. So to prevent another commit that might unnecessarily affect remote, I i did:

I created the .gitignore in powershell using echo "build" > .gitignore. This created a file with UTF-16LE encoding. Git did not recognize the contents of the file and continued to show the build folder as untracked. I deleted the file and recreated it in the geany text editor (UTF-8) and git now ignores the build folder. A short search re-inforces that that git doesn't like UTF-16.

4
.gitignore does not apply to the .cxx folder
0
Gitignore not ignoring target folder in scala sbt project
-2
Why Git fails to ignore the folder I've put in gitignore file?
7319
How do I make Git forget about a file that was tracked, but is now in .gitignore?
2723
Ignore files that have already been committed to a Git repository
0
How to add Django env folder into .gitignore?
1
gitignore not ignoring files/folder
0
Xcode .gitIgnore showing shows files with ignored folder

2328
Make .gitignore ignore everything except a few files
7319
How do I make Git forget about a file that was tracked, but is now in .gitignore?
1397
ignoring any 'bin' directory on a git project
2445
How do I show the changes which have been staged?
1681
How do I configure git to ignore some files locally?
803
git add only modified changes and ignore untracked files
2444
What are the differences between .gitignore and .gitkeep?
1130
Global Git ignore
1688
.gitignore is ignored by Git
2025
Remove file from latest commit