When I do a git diff or a git log -p, how do I get line numbers of the source file(s) inlined with the output?

I tried to look it up man git-diff | grep "line numbers" and I tried googling but got nothing quickly.

You can't get human-readable line numbers with git diff

There aren't currently any options to get line-numbers displayed vertically on the side with git diff.

That information is available in the (c)hunk headers for each change in the diff though, it's just in unified-diff format:

says that the previous version of the file starts at line 11, and includes 7 lines:

while the next version of the file also starts at line 11, and also includes 7 lines.

As you can probably tell, unified-diff format doesn't make it easy to figure out line numbers (at least if you're not a machine). If you really want line numbers that you can read, you'll need to use a diffing tool that will display them for you.

It's not part of git yet, but I wrote a wrapper tool in the AWK programming language called git diffn, which shows line numbers. Here is a quick way to install and use it.

As of 24 May 2020, you can now use the third-party tool git diffn (full disclosure: I wrote it, and you must run a couple commands, as described below, to install it) for this purpose. It's a light-weight wrapper around git diff, written in the awk pattern/action-based programming language. Here's a sample output from running git diffn. The colons (:) all staying white is intentional, to act as a visual queue that they are a separator from left to right. (If you don't like that, it's easy to change in the code). 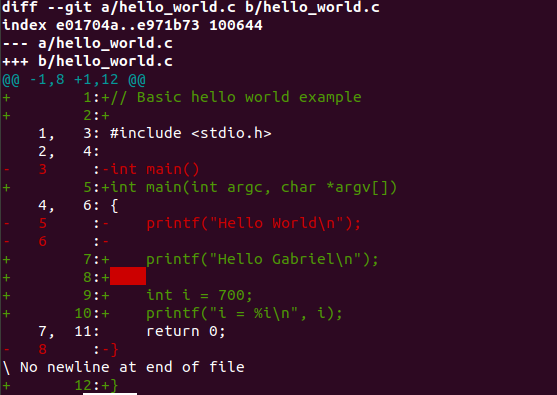 From the top of git-diffn.sh:

Option 1 (my recommendation): download the whole repo and then create a symlink to the program so that you can easily receive updates by doing a git pull from the repo whenever you want.

First, cd to wherever you want to install this. Then run:

Done! Now just do the final step below!

Option 2 (for those who just want the 1 file): download just the one file one time.

Done! Now just do the final step below!

Now close and re-open your terminal, or re-source it with . ~/.bashrc, and you are done!

git diffn will now work as an exact drop-in replacement for git diff!

Change it to this and save the file:

Here's the output of git diff first for comparison purposes:

And a screenshot to show the color. Note that the red highlighted section is simply showing empty whitespace (spaces in this case) that could be deleted: 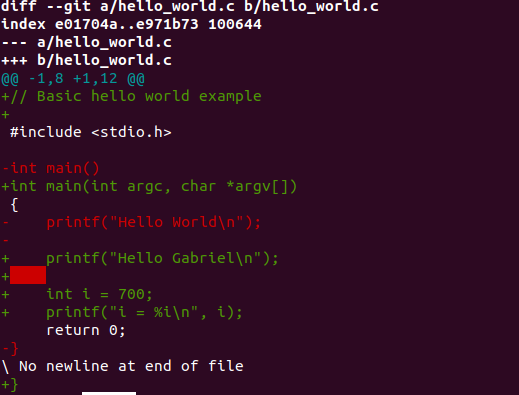 And a screenshot to show the color. Notice that the colons are NOT colored or stylized to match the surrounding text on the left and right. This is intentional and designed-in behavior to act as a visual separator between the line numbers added on the left and the original git diff output on the right.

A quick way is to use git diff -U0. That will set the lines of context to 0, which will make the @@ values match the actual changed lines. By default, the @@ values include 3 lines of before/after context, which is not convenient for humans.

As you can see, setting context = 0 makes the @@ values easier for humans to read. You can see that the changed lines start at line 13, and there are 2 changed lines.

This isn't perfect, since it only shows the line number for each block. If you want to see line numbers for every line, then use difftool for an external editor. See https://stackoverflow.com/a/50049752

Here is a script that attempts to fix this - not tested it in anger but it seems ok. It relies on the records git diff produces and uses awk to maintain line counts.

You can use git difftool to do the diff with an external editor that will display line numbers. Here's how to do it with vim / vimdiff:

I like to use git difftool with meld as my difftool. It's easier to look at than git diff, has a nice side-by-side gui comparison, and shows line numbers on each side.

I just wrote git diffn over the last few days to be a drop-in replacement for git diff on the command-line. Give it a shot. See my other answer here.

on the file. It shows you the committer, commit id, and line number for each line in the file.

Then, yank your difftool on some file:

If you are OK with using a separate application then you can try https://github.com/dandavison/delta it has syntax highlight, can also use it as a native Linux's diff alternative and tons of other features also

154
How can I visualize per-character differences in a unified diff file?
201
Git diff to show only lines that have been modified
89
Using git diff, how can I get added and modified lines numbers?
34
How do you customize the color of the diff header in git diff?
24
Why awk script does not work on Mac OS but works on Linux?
7
How to see changed lines with certain words and the containing file for a git commit? - Can git diff print a file name line prefix?
2
Search for TODO in added lines and show them as default commit message in TortoiseGit on Windows
1
Can the regex matching pattern for awk be placed above the opening brace of the action line, or must it be on the same line?
0
git diff with line numbers and proper code alignment/indentation
1
How to get list of added and updated line numbers from a range of git commits?
See more linked questions