From where do I import settings from previous version of Android Studio?

I was running Droidio (Android Studio) 0.6.1; from there I was not able to update to the newest version (a quantum leap to 0.8); I had to download it separately and install from Windows Explorer. But now the installation process is looking for old settings:

Where it seems to want to take me is here (to the Android folder, I reckon); this is what I see when I mash the "compressed ellipsis" (one dot) button: 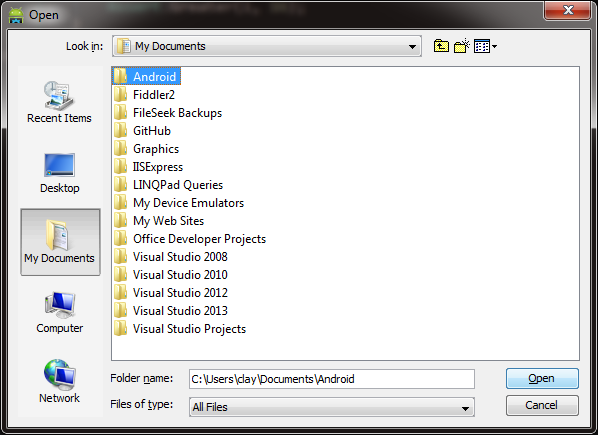 ...but I'm not sure that is really the right spot; Is it [not]? What is the precise name of the settings file I should be seeking?

I followed Gabriele's directive, and then I got this: 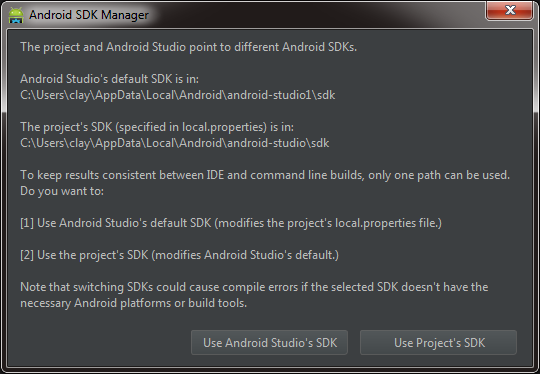 I chose "Use Android Studio's SDK"

And then I got this when trying to rebuild my project, "Error:Execution failed for task ':app:preBuild'. failed to find target android-19 : C:\Users\clay\AppData\Local\Android\android-studio1\sdk"

I then opened the SDK Manager and installed what was missing/out of date, and tried to build again.

The "Install missing platform and sync project" part of the message is a link. I clicked it, accepted the License Agreement.

Once that finished, the build failed again with a similar message: "...failed to find Build Tools revision 19.1.0 Install Build Tools 19.1.0 and sync project"

Again, the "install..." jazz was a link; I clicked it, accepted, and installed...

The next problem child was, "Error:The project is using an unsupported version of the Android Gradle plug-in (0.11.2) Fix plug-in version and re-import project"

Acquiescing to the counsel of the wise old man in "Never Cry Wolf," I endeavored to persevere by clicking "Fix plug-in version and re-import project"

At which point I finally got a successful build.

I then ran the project, and it seemed to be running (it said so, and the red square was visible), but no emulator ever appeared.

I opened the AVD Manager, and the device had a warning icon (repairable). I clicked the "Repair" button; it seemed to work - the warning icon disappeared.

But then I got this: 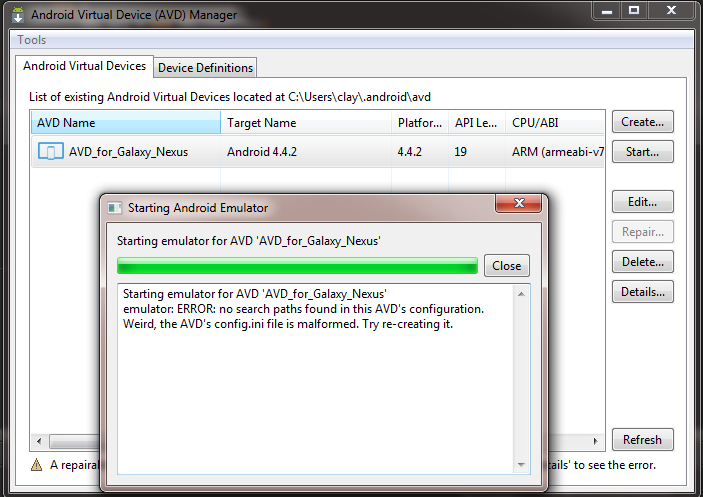 It still won't display an emulator when I Run > Debug App... 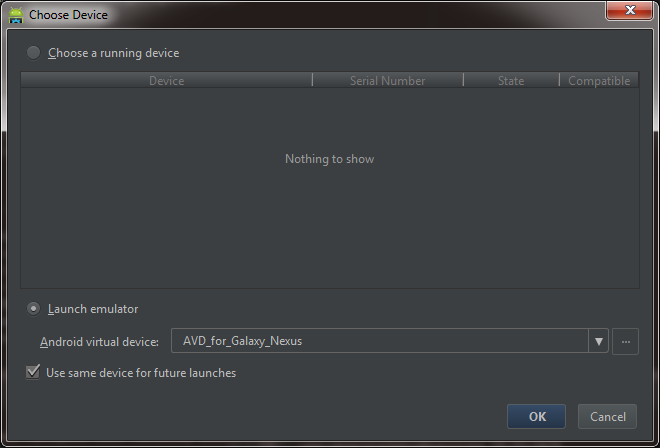 I reckon I should try "re-creating the AVD's weird, malformed config.ini" but don't savvy just what steps to take to accomplish that.

I used a method to trick the Android Studio to import settings from previous one without exporting the settings and it worked.

Just go to your previous .AndroidStudio\config folder, copy and paste them all to the new one (in my scenario I updated from 1.1 to 1.2 beta) .AndroidStudioPreview1.2

(For preventing any failure, please make a Rar file of your original config, also, after it works, export it so you can import it if you need it)

If you are using AndroidStudio 2.1-4.0 you will find these folders:

If you are using AndroidStudio 2.0 you will find these folders:

If you are using AndroidStudio 1.5 you will find these folders:

If you are using .AndroidStudioPreview 1.4 you will find these folders:

If you are using AndroidStudio 1.3 you will find these folders:

Your setting (with a Preview version):

for a *nix environment

Since Android Studio is now out of beta the settings can now be found in:

On my Mac, using Android Studio 2.1, the directory is

that is, not a hidden dir.

For Linux and Android Studio 4.2+, the location is:

assuming you are upgrading from version 4.1.

And in a *nix environment, this will probably be located at /home/[username]/.AndroidStudioPreview

for Android Studio 4.2, Google has moved it to %appdata%\Roaming\Google\AndroidStudioPreview4.2

Contrary to JetBrains' documentation, but according to Configure Android Studio, the configuration is currently under a "Google" folder:

That's where I found them (the Mac variant).

There is a single point of reference for the location of the settings folder for all Jetbrains IDE's for all OS's:

Not the answer you're looking for? Browse other questions tagged android android-studio settings settings.bundle or ask your own question.

3
Android Studio : decrease font size
1
How to point settings location of Android Studio to a different custom location?
2
LibGDX file not loading for first time on Android Studio
1
May I remove the folder named “.AndroidStudio3.0” after update completed?

3002
How to stop EditText from gaining focus at Activity startup in Android
685
Android error: Failed to install *.apk on device *: timeout
1524
Rename package in Android Studio
370
How to update gradle in android studio?
1478
Where to place the 'assets' folder in Android Studio?
614
Update Eclipse with Android development tools v. 23
792
Error retrieving parent for item: No resource found that matches the given name after upgrading to AppCompat v23
1150
How do I “select Android SDK” in Android Studio?
401
ADB.exe is obsolete and has serious performance problems