I have two disconnected graphs in a neo4j database. They are very similar networks but one is a version that is several months later of the same graph.

Is there a way that I can easily compare these two graphs to see any additions, deletes or editing that has been done to the network?

If you want a pure Cypher solution to compare the structure of two graphs you can try the following approach (based on Mark Needham's article for creating adjacency matrices from a graphs https://markhneedham.com/blog/2014/05/20/neo4j-2-0-creating-adjacency-matrices/)

The basic idea is to construct two adjacency matrices, one for each graph to be compared with a column and row for each node identifier (business identifier, not node id), and then to perform some algebra on the two matrices to find the differences.

Step 1 is to find all the unique node identifiers, the 'name' property in this case, from both graphs:

uniqueNames now contains a list of all the unique identifiers in both graphs. (It is necessary to unwind the collected names and then collect them back up because the distinct operator doesn't work on a list - there is a lot more collecting and unwinding to come!)

Next, two new lists of unique identifiers are created to represent the two dimensions of of the adjacency matrix for the first graph.

Then an optional match is performed to create a Cartesian product of each node with every other node in G1, the first graph.

The matched paths will either exist or return null from the above match statement. These are now converted into a count of edges between nodes or a zero if there was no connection (the essence of the adjacency matrix). The matched paths are sorted to keep the order of rows and columns in the matrix correct when it is created. uniqueNames is passed through as it will be used to construct the adjacency matrix for the second graph.

Next, the edges are rolled up into a list of values for the second dimension

The whole operation above is repeated for the second graph to generate the second adjacency matrix.

At this point g1DimNames and g1Matrix form a Cartesian product with the g2DimNames and g2Matrix. This product is factored by removing duplicate rows with the filter statement

The final step is to determine the differences between the two matrices, which is just a matter of finding the rows which are different in the factored result above.

We then end up with a result that shows what is different and how: 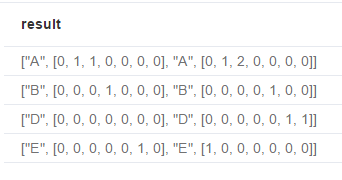 There are at least a couple of caveats to this approach:

I guess diffing is most easy done using a text based tool.

One approach I can think of is to export the two subgraphs to GraphML using https://github.com/jexp/neo4j-shell-tools and then apply the regular diff from unix.

Another one would be using dump in neo4j-shell and diff the results as above.

This largely depends on what you want the diff to be of and the constraints of the graphs themselves.

Not the answer you're looking for? Browse other questions tagged neo4j graph-databases or ask your own question.

29
What are the best ways to store Graphs in persistent storage
16
Storing multiple graphs in Neo4J
4
Cypher query to list all disconnected graphs Neo4j graph DB?
1
Neo4j data modeling for branching/merging graphs
37
Pulling data from Neo4j using PySpark
1
Neo4j browser runs even when Neo4j is stopped after upgrading to 3.1.0
2
find loops in Neo4j
1
Is there any performance testing of Neo4j, and pros & cons of using it in real world practice
0
Neo4j: Combine two databases