What is the role of column "IS CLOSED" in magento's transactions area?

I can see that the capture has been processed successfully: 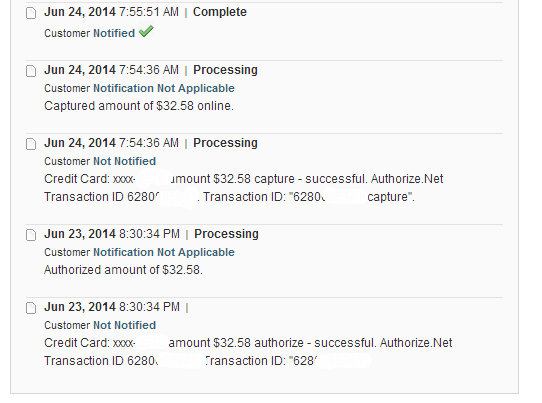 But then on the "transactions" screen, "Is Closed" column is saying "no" next to capture. I think I just don't understand the role of this column. Can someone help explain it to me?

A little background on the credit card payment transaction process flow helps make sense of this. These are the basic flow actions of the transaction lifecycle:

These flow actions are broken down into more specific operations that can be called against the payment gateway. Here are some basic ones that are relevant:

Use a previously obtained authorization code to complete the transaction.

The amount captured can be lower than the originally obtained authorization amount (this is useful in cases like our example where you don't know the total order amount ahead of time).

Settlement: This is the process merchants must complete ... to be paid for their transactions.

The product or service must be delivered or performed before settlement can take place. In the case of mail order/telephone order, this specifically means the goods must be shipped before the settlement process is performed.

In Magento, the is_closed flag signifies that a transaction is settled and no other operations may be performed against it. The reason a transaction would be left open until settlement is so that you can do partial shipments of goods (multiple captures), as well as void or refund the transaction.

To use Magento’s Mage_Authorizenet_Model_Directpost as an example, the capture() operation leaves the current transaction open, while void() and _refund() operations close it.

Not the answer you're looking for? Browse other questions tagged magento or ask your own question.

11
Magento: What is the conceptual difference between a Quote Item and a Quote Address Item?
113
What is the difference between "Flush Magento Cache" and "Flush Cache Storage" in magento's cache management?
12
Transactions in the Magento order system
2
How can I move Magento's layered Navigation block from left column to right column?
2
install script doesn't appear to run but shows in database
0
Magento: move the “My Cart” box from the right column to the left
0
How to include the magento product comparison in single column layouts?
0
In Mage_Customer what role does <fieldsets> have?
1
Add totals at the renderer column in the magento grid