Yeoman | yo command not found

Saw that there were some similar questions as this one but didn't find the answers satisfying enough or applicable to my problem so thought I'd thought I'd ask one more time.

i'm having trouble with the "$ yo" command and that my cmd keeps telling me that the command is not found.

without any problems. I've also checked my $PATH under

and confirmed that yo is installed together with other node modules. I'm able to call other commands such as:

with out any problems. While yo results in failure

Does anyone have any suggestions of what's wrong? I've read that ther might be something wrong with the $PATH? Can I reset it in any way?

Try adding this to your user path:

Then, restart the console.

Add this to PATH:

and be sure 2 things:

i just fixed the same issue on my windows, $PATH should be updated on system PATH to avoid user PATH to override.

In windows run this in command prompt:

I also tried to add C:\Users\myusername\AppData\Roaming\npm, uninstalling, reinstalling yo globally,and restarted console but still prints out yo:command not found. I check the files manually and I found out that it doesn't not create Windows Command Script. I'm not sure if this related to that but maybe it may help to find solution for this issue. My OS: Windows 8.1 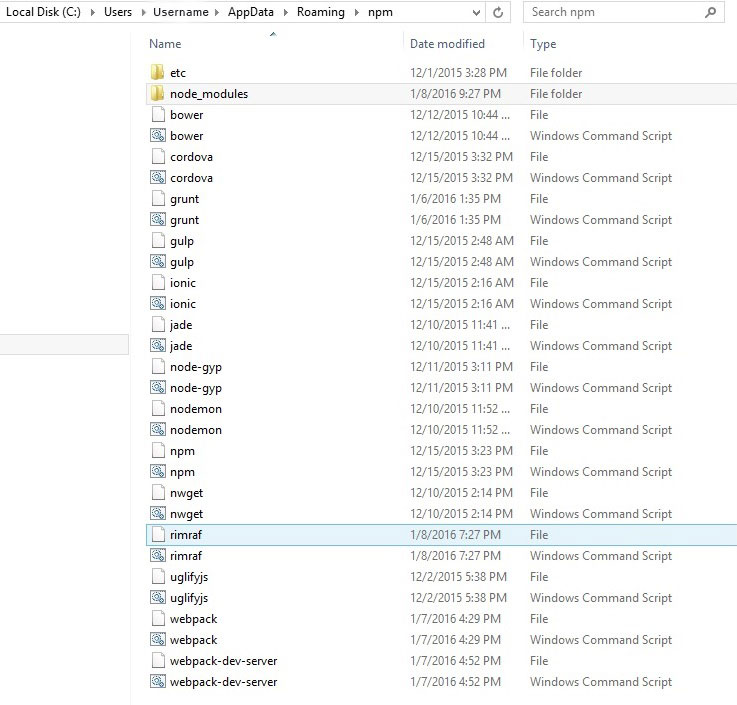 For me yo was installed in C:\Program Files (x86)\Git\local

After I added C:\Program Files (x86)\Git\local in Path, it worked

After you install yeoman, check the directory it is installed on and add that directory to path

For me I added this:C:\usr\local to the PATH, and it worked like a charm!

I solve it by:

Try these (Worked for me in Mac)

i was getting yo: command not found after successfully installing yeoman on my Windows machine. i was able to fix this by replacing "yo" with the following /c/Users/daclar.CLARKE-BOOK/AppData/Roaming/npm/yo

this allowed me to continue with my Yo commands form Git Bash so instead of doing...

You have to add the path where yo is installed. You can check that by giving the following command.

npm config get prefix. you should get a location. Navigate to the location and see if yo is installed at the location.

for me, the location was C:\usr\local. So I added the same to environment variables and done.

In Windows, just install the Yeoman Generator globally by,

and then add the following path in you system variables,

You can refer more on https://github.com/keystonejs/generator-keystone

We need to remove nodejs cache by performing the following steps: