What's the difference between buildtoolsVersion vs compileSdkVersion in the build.gradle for an Android project?

EDIT: Specifically, I'd like clarification on what the build tool is?

compileSdkVersion is the API version of Android that you compile against.

buildToolsVersion is the version of the compilers (aapt, dx, renderscript compiler, etc...) that you want to use. For each API level (starting with 18), there is a matching .0.0 version.

Between Android releases we will release updates of the compilers, and so we'll release version .0.1, .0.2, etc... Because we don't want to silently update these version under you, it's up to you to move to the new version when it's convenient for you.

You can use a higher version of the build-tools than your compileSdkVersion, in order to pick up new/better compiler while not changing what you build your app against.

It is no longer as important to know the exact buildToolsVersion as it used to be because it is now chosen automatically.

You no longer need to specify a version for the build tools (so, you can now remove the android.buildToolsVersion property). By default, the plugin automatically uses the minimum required build tools version for the version of Android plugin you're using.

I originally came here looking for how to know the exact version number of the most recent Build Tools Version (back in the days when this needed to be updated manually). If you still need to do this, you can find it in the following way: 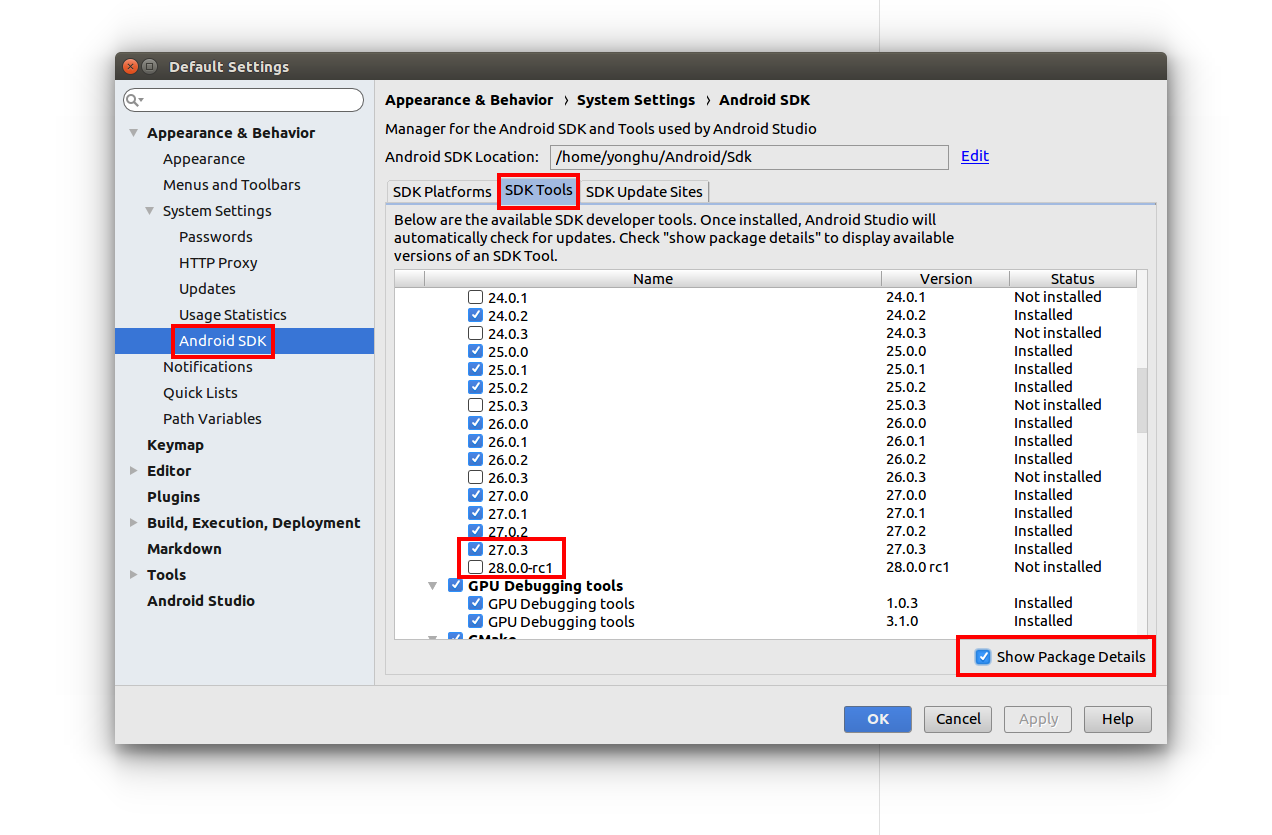 In the image above, I can see that I have buildToolsVersion 27.0.3 installed. There is a more recent rc (release candidate) version, but I haven't installed it. I will when the stable version comes out.

Not the answer you're looking for? Browse other questions tagged android android-gradle-plugin or ask your own question.

389
How to build a horizontal ListView with RecyclerView
294
Simple Android grid example using RecyclerView with GridLayoutManager (like the old GridView)
243
Simple Android RecyclerView example
20
What is the buildToolsVersion for android SDK 24?
2
Fail to decrease API
4
Android: Build Tool Version vs Compile SDK Version
2
FAILURE: Build failed with an exception. on existing react native app
0
What does upgrading gradle and gradle plugin change / influence in an app
-2
difference between compileSdkVersion and buildToolsVersion in android studio..?
0
What does buildToolsVersion in build.gradle file actually do?
See more linked questions

4192
How to close/hide the Android soft keyboard programmatically?
6210
What is the difference between "px", "dip", "dp" and "sp"?
1230
Is quitting an application frowned upon?
2983
Is there a unique Android device ID?
3898
Proper use cases for Android UserManager.isUserAGoat()?
1064
Android Studio: Add jar as library?
489
How to manually include external aar package using Gradle for Android
1416
What is Gradle in Android Studio?
641
What is the difference between compileSdkVersion and targetSdkVersion?