Instead of hardcoding the default @author template I would like Eclipse to use user's real name taken from account information (in Linux - but Windows solution is also welcome). Entering it somewhere into Eclipse configuration would be acceptable, too, alas I can't find the right place.

It seems that your best bet is to redefine the java user.name variable either at your command line, or using the eclipse.ini file in your eclipse install root directory.

This seems to work fine for me:

Open Eclipse, navigate to Window -> Preferences -> Java -> Code Style -> Code Templates -> Comments -> Types and then press the 'Edit' button. There you can change your name in the generated comment from @Author ${user} to @Author Rajish. 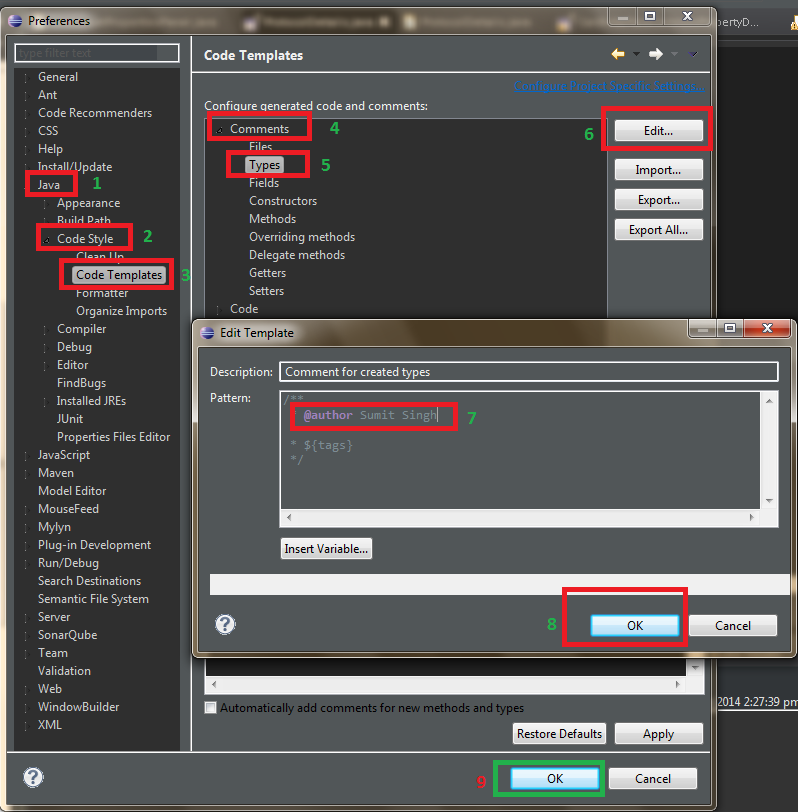 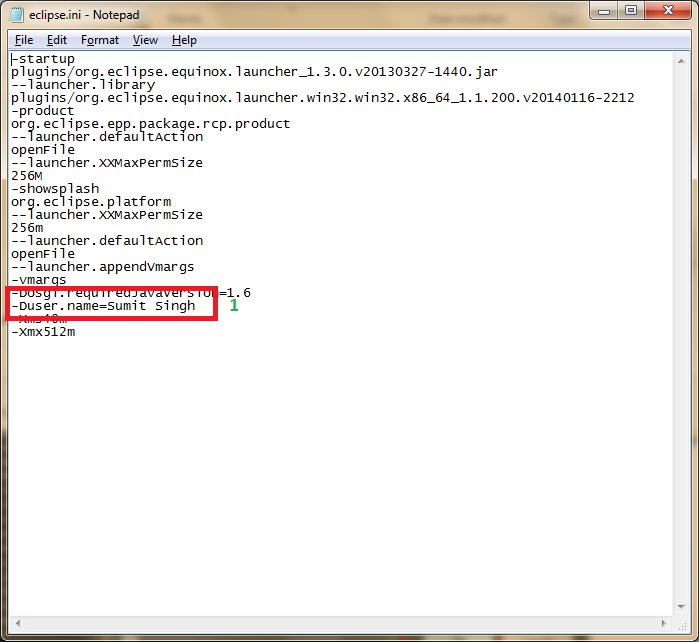 One would expect creating or changing template variables on a project-, workspace-, or environment-basis is a standard Eclipse feature. Sadly, it is not. More so, given that Eclipse plugins can define new variables and templates, there should be plugins out there providing a solution. If they are, they must be hard to find. mmm-TemplateVariable, which is available in the Eclipse Marketplace, is a step in the right direction for Maven users, giving the ability to include version, artifactId, etc. in templates.

Fortunately, EGit, which is an Eclipse tool for Git, provides very flexible means for including many different variables in code templates. The only requirement is that your project uses Git. If you don’t use Git, but are serious about software development, now is the time to learn (Pro Git book). If you are forced to use a legacy version control system, try changing some minds.

Thanks to the efforts of harmsk, EGit 4.0 and above includes the ability to use Git configuration key values in templates. This allows setting template values based on repository settings (project), user settings (account), and/or global settings (workstation).

The following example shows how to set up Eclipse and Git for a multi-user development workstation and use a custom Git configuration key in lieu of ${user} to provide more flexibility. Although the example is based on a Windows 10 installation of Eclipse Mars and Git for Windows, the example is applicable to Linux and OSX running Eclipse and Git using their respective command line tools.

The format of a Git template variable is as follows

where <name> is any arbitrary variable name and <key> is the Git configuration key whose value should be used. Given that, changing the Comments→Types template to

will now attempt to resolve the author’s name from Git’s user.author configuration key. Without any further configuration, any newly created comments will not include a name after @author, since none has been defined yet.

From the command line

The purpose of this “author” is to serve as a reminder that it should be set elsewhere. This is particularly useful when new user accounts are being used on the workstation.

To verify this setting, create an empty Java project that uses Git or open an existing Git-based project. Create a class and use Source→Generate Element Comment from the context menu, ALT-SHIFT-J, or start a JavaDoc comment. The resulting @author tag should be followed by the warning.

The remaining configuration changes can be performed without Administrator privileges.

Git Global(User) Configuration - Global, or user, configurations are those associated with a specific user and will override system-wide configurations. These settings apply to all Git-based projects unless overridden by repository settings. If the author name is different due to various project types such as for work, open source contributions, or personal, set the most frequently used here.

Having configured the global value, return to the test project used early and apply a class comment. The@author tag should now show the global setting.

Given this, new comments in the test project will use the locally defined author name. Other Git-based projects, will still use the global author name.

The configuration changes above can also be set from within Eclipse through its Preferences: Team→Git-Configuration. Eclipse must be run as Administrator to change system-wide Git configurations.

Although this example dealt specifically with the most common issue, that of changing ${user}, this approach can be used for more. However, caution should be exercised not to use Git-defined configuration keys, unless it is specifically intended.

Rather than changing ${user} in eclipse, it is advisable to introduce

in eclipse.ini which is present in your eclipse folder.

It was was very useful for me on MacOS.

This is the file we're all looking for (inside your Eclipse workspace):

You will find an @author tag with the name you want to change. Restart Eclipse and it will work.

You can also modify the 'ini' file as prior answers suggest or set the user name var for a global solution. Or override the @author tag in the Preferences menu for a local solution. Those are both valid solutions to this problem.

But if you're looking for 'that' author name that is bothering most of us, is in that file.

edit the file /etc/eclipse.ini, so as to contain entry as;

Restart the "eclipse" and now, on creation of any new file, with wizard (c/c++/java), it will use "myname" in place of ${user}. 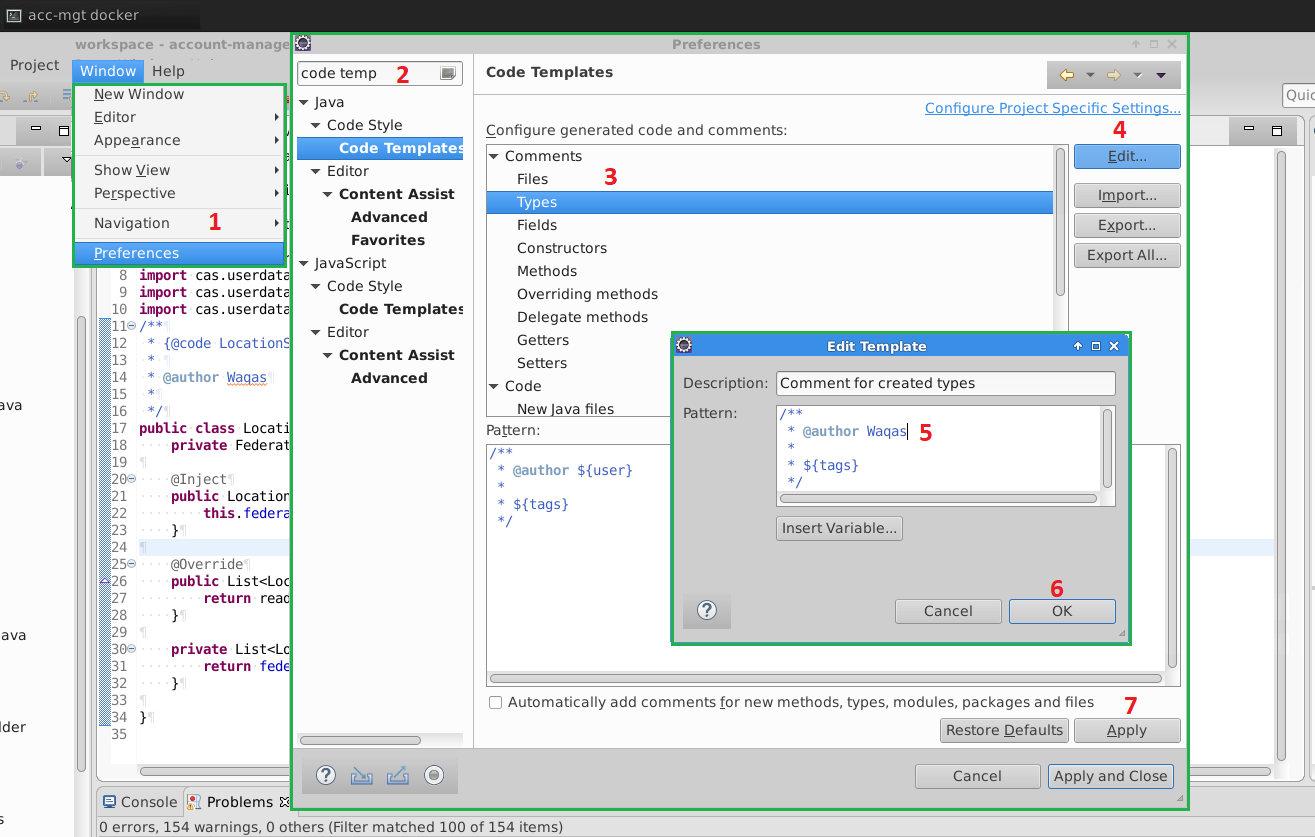 152
How do I set ${user} in Eclipse to get the correct @author tag?
43
How can I change @author tag configuration in eclipse in such a way that it takes the name I have specified?
1
auto-generation of python file info(author, create date etc.)
2
Append author onto JavaDoc Headers in existing files upon saving Eclipse
0
Change @author name in AnyLogic

494
How can I get Eclipse to show .* files?
1259
How can you speed up Eclipse?
884
How do I change Eclipse to use spaces instead of tabs?
738
How can I show line numbers in Eclipse?
415
How to auto-remove trailing whitespace in Eclipse?
3
Insert template into every source file in an Eclipse project?
664
Eclipse HotKey: how to switch between tabs?
427
How to change font size in Eclipse for Java text editors?
266
How to change the Eclipse default workspace?