I have a large import task I need to do with core data.
Let say my core data model look like this:

So I want to do this import in background without blocking the UI and while the use scrolls a cars table view that present all the cars.

But I'm not really sure I'm doing the right thing here, for example:

Another thing that I'm not sure is when to call save on the main context, In my example I just call save in the end of the import, but I saw examples that uses:

As I mention before, I want the user to be able to interact with the data while updating, so what if I the user change a car type while the import change the same car, is the way I wrote it safe?

Thanks to @TheBasicMind great explanation I'm trying to implement option A, so my code looks something like:

This is the Core Data configuration in AppDelegate:

And this is how my import method looks like now:

And I also have the following observer:

This is an extremely confusing topic for people approaching Core Data for the first time. I don't say this lightly, but with experience, I am confident in saying the Apple documentation is somewhat misleading on this matter (it is in fact consistent if you read it very carefully, but they don't adequately illustrate why merging data remains in many instances a better solution than relying on parent/child contexts and simply saving from a child to the parent).

The documentation gives the strong impression parent/child contexts are the new preferred way to do background processing. However Apple neglect to highlight some strong caveats. Firstly, be aware that everything you fetch into your child context is first pulled through it's parent. Therefore it is best to limit any child of the main context running on the main thread to processing (editing) data that has already been presented in the UI on the main thread. If you use it for general synchronisation tasks it is likely you will be wanting to process data which extends far beyond the bounds of what you are currently displaying in the UI. Even if you use NSPrivateQueueConcurrencyType, for the child edit context, you will potentially be dragging a large amount of data through the main context and that can lead to bad performance and blocking. Now it is best not to make the main context a child of the context you use for synchronisation, because it won't be notified of synchronisation updates unless you are going to do that manually, plus you will be executing potentially long running tasks on a context you might need to be responsive to saves initiated as a cascade from the edit context that is a child of your main context, through the main contact and down to the data store. You will have to either manually merge the data and also possibly track what needs to be invalidated in the main context and re-sync. Not the easiest pattern.

What the Apple documentation does not make clear is that you are most likely to need a hybrid of the techniques described on the pages describing the "old" thread confinement way of doing things, and the new Parent-Child contexts way of doing things.

Your best bet is probably (and I'm giving a generic solution here, the best solution may be dependent on your detailed requirements), to have a NSPrivateQueueConcurrencyType save context as the topmost parent, which saves directly to the datastore. [Edit: you won't be doing very much directly on this context], then give that save context at least two direct children. One your NSMainQueueConcurrencyType main context you use for the UI [Edit: it's best to be disciplined and avoid ever doing any editing of the data on this context], the other a NSPrivateQueueConcurrencyType, you use to do user edits of the data and also (in option A in the attached diagram) your synchronisation tasks.

The next question to consider is where you put the user edit context (the context where edits made by the user get reflected back into the interface). If the user's actions are always confined to edits on small amounts of presented data, then making this a child of the main context again using the NSPrivateQueueConcurrencyType is your best bet and easiest to manage (save will then save edits directly into the main context and if you have an NSFetchedResultsController, the appropriate delegate method will be called automatically so your UI can process the updates controller:didChangeObject:atIndexPath:forChangeType:newIndexPath:) (again this is option A).

If on the other hand user actions might result in large amounts of data being processed, you might want to consider making it another peer of the main context and the sync context, such that the save context has three direct children. main, sync (private queue type) and edit (private queue type). I've shown this arrangement as option B on the diagram.

Similarly to the sync context you will need to [Edit: configure the main context to receive notifications] when data is saved (or if you need more granularity, when data is updated) and take action to merge the data in (typically using mergeChangesFromContextDidSaveNotification:). Note that with this arrangement, there is no need for the main context to ever call the save: method. 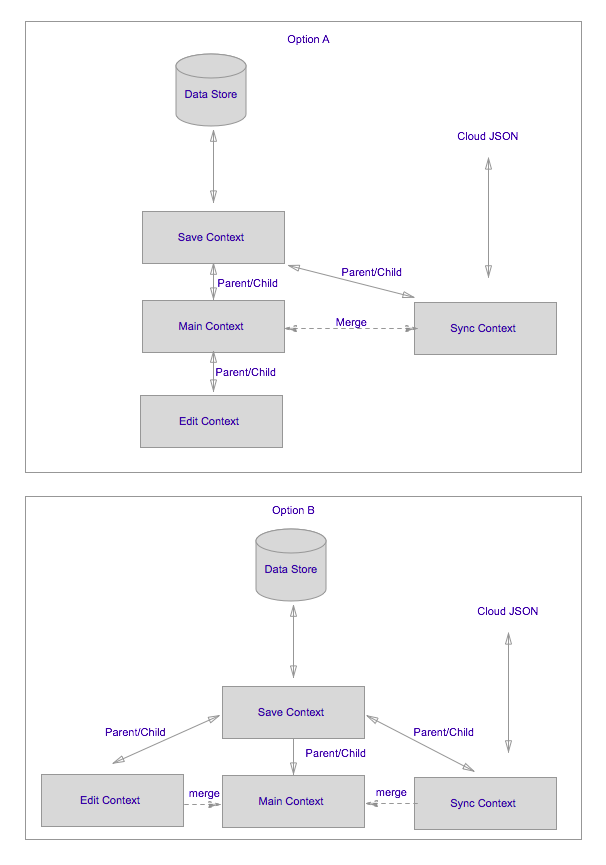 When you save from a child, up to a parent, the various NSManagedObject change and save notifications are fired. So for example if you are using a fetch results controller to manage your data for your UI, then it's delegate methods will be called so you can update the UI as appropriate.

For this reason, with an arrangement like option A, it is a good pattern to try to fetch objects, modify them, save them and reset the edit context (e.g. [editContext reset] with any single iteration of the run-loop (or within any given block passed to [editContext performBlock:]). It is also best to be disciplined and avoid ever doing any edits on the main context. Also, to re-iterate, since all processing on main is the main thread, if you fetch lots of objects to the edit context, the main context will be doing it's fetch processing on the main thread as those objects are being copied down iteratively from parent to child contexts. If there is a lot of data being processed, this can cause unresponsiveness in the UI. So if, for example you have a large store of managed objects, and you have a UI option that would result in them all being edited. It would be a bad idea in this case to configure your App like option A. In such a case option B is a better bet.

If you aren't processing thousands of objects, then option A may be entirely sufficient.

BTW don't worry too much over which option you select. It might be a good idea to start with A and if you need to change to B. It's easier than you might think to make such a change and usually has fewer consequences than you might expect.

Firstly, parent/child context are not for background processing. They are for atomic updates of related data that might be created in multiple view controllers. So if the last view controller is cancelled, the child context can be thrown away with no adverse affects on the parent. This is fully explained by Apple at the bottom of this answer at [^1]. Now that is out of the way and you haven't fallen for the common mistake, you can focus on how to properly do background Core Data.

Create a new persistent store coordinator (no longer needed on iOS 10 see update below) and a private queue context. Listen for the save notification and merge the changes into the main context (on iOS 10 the context has a property to do this automatically)

For a sample by Apple see "Earthquakes: Populating a Core Data Store Using a Background Queue" https://developer.apple.com/library/mac/samplecode/Earthquakes/Introduction/Intro.html As you can see from the revision history on 2014-08-19 they added "New sample code that shows how to use a second Core Data stack to fetch data on a background queue."

Here is that bit from AAPLCoreDataStackManager.m:

Here is the full description of how the sample is designed:

The application uses two Core Data "stacks" (as defined by the existence of a persistent store coordinator). The first is the typical "general purpose" stack; the second is created by a view controller specifically to fetch data from a remote server (As of iOS 10 a second coordinator is no longer needed, see update at bottom of answer).

[^1]: This supports the "pass the baton" approach whereby—particularly in iOS applications—a context is passed from one view controller to another. The root view controller is responsible for creating the initial context, and passing it to child view controllers as/when necessary.

The reason for this pattern is to ensure that changes to the managed object graph are appropriately constrained. Core Data supports "nested" managed object contexts which allow for a flexible architecture that make it easy to support independent, cancellable, change sets. With a child context, you can allow the user to make a set of changes to managed objects that can then either be committed wholesale to the parent (and ultimately saved to the store) as a single transaction, or discarded. If all parts of the application simply retrieve the same context from, say, an application delegate, it makes this behavior difficult or impossible to support.

Update: In iOS 10 Apple moved synchronisation from the sqlite file level up to the persistent coordinator. This means you can now create a private queue context and reuse the existing coordinator used by the main context without the same performance problems you would have had doing it that way before, cool!

By the way this document of Apple is explaining this problem very clearly. Swift version of above for anyone interested

7
Infrequent CoreData crash "nilOutReservedCurrentEventSnapshot"
8
Why might Core Data fail to merge data from private context to main context?
6
How to speed up updating relationship among tables, after one or both tables are already saved?
7
CoreData Save Context Causing Crash When App Returns to Foreground. Swift
4
Why I am getting Multithreading_Violation_AllThatIsLeftToUsIsHonor for this simplest NSAsynchronousFetchRequest use case?
2
Azure Mobile Services - Duplicate item after synchronization
0
Core Data fetch request with WatchConnectivity
0
CoreData NSSQLiteStoreType not fetching relationship
0
Save managed object changes in background with NSPersistentContainer
1
CoreData delete object in context
See more linked questions

430
Core Data: Quickest way to delete all instances of an entity
122
"Collection was mutated while being enumerated" on executeFetchRequest
1490
Passing data between view controllers
101
Implementing Fast and Efficient Core Data Import on iOS 5
32
Core Data nested managed object contexts and frequent deadlocks / freezes
2
_PFFaultHandlerLookupRow crash while saving child context
0
Changing views keeps giving me attempt to present vc1 on vc whose view is not in the window hierarchy
0
This NSPersistentStoreCoordinator cannot perform a save operation
1
Core Data Multiple ManagedObjectContext