I am using Maven 2.2.1 and to build my project I used this command

However, the build failed saying it couldn't find one of the artifact. However, when I used:

So far I have been thinking that these 2 commands are equivalent. However, this link seems to suggest that -Dmaven.test.skip=true also skips compiling the test cases.

However, that still didn't explain to me why one command is working and another is not. Will be thankful if anyone please explain this to me.

As you noted, -Dmaven.test.skip=true skips compiling the tests. More to the point, it skips building the test artifacts. A common practice for large projects is to have testing utilities and base classes shared among modules in the same project.

This is accomplished by having a module require a test-jar of a previously built module:

In contrast, when you use -DskipTests, Maven does not run the tests, but it does compile them and build the test-jar, making it available for the subsequent modules.

I had some inter-dependency with the tests in order to build the package.

The following command manage to override the need for the test artifact in order to complete the goal:

There is a difference between each parameter.

As the parameter -Dmaven.test.skip=true skip compiling you don't have the tests artifact.

I can give you an example which results with the same problem, but it may not give you an answer to your question. (Additionally, in this example, I'm using my Maven 3 knowledge, which may not apply for Maven 2.)

In a multi-module maven project (contains modules A and B, where B depends on A), you can add also a test dependency on A from B.

This dependency may look as follows:

(for more information refer to https://maven.apache.org/guides/mini/guide-attached-tests.html)
Note that the project A produces secondary artifact with a classifier tests where the test classes and test resources are located.

If you build your project with -Dmaven.test.skip=true, you will get a dependency resolution error as long as the test artifact wasn't found in your local repo or external repositories. The reason is that the tests classes were neither compiled nor the tests artifact was produced.
However, if you run your build with -DskipTests your tests artifact will be produced (though the tests won't run) and the dependency will be resolved.

The parameter -DskipTests may not work depending on your surefire-plugin version.

During maven compilation you can skip test execution by adding following plugin in pom.xml

I have another approach for Intellij users, and it is working very fine for me: 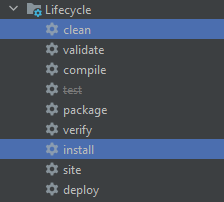 Not the answer you're looking for? Browse other questions tagged maven or ask your own question.

793
How to force maven update?
1307
How to add local jar files to a Maven project?
404
Maven package/install without test (skip tests)
758
Dealing with “Xerces hell” in Java/Maven?
3
what does -D indicates in maven command: mvn clean install -DskipTests
322
Maven is not working in Java 8 when Javadoc tags are incomplete
110
How do I force Maven to use my local repository rather than going out to remote repos to retrieve artifacts?
4
What does -Dmaven.test.skip=null do?
192
Maven dependencies are failing with a 501 error