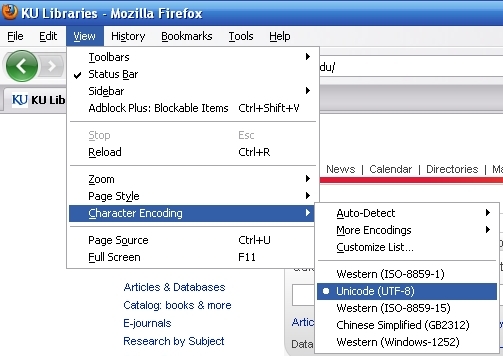 If the other answers haven't helped, you might want to check whether your database is actually storing the mojibake characters. I was viewing the text in utf-8, but I was still seeing the mojibake and it turned out that, due to a database upgrade, the text had been permanently "mojibaked".

In this case, one option is to "fix" the text with Python's ftfy package (or JavaScript verion here).

TomerBTomerB
19
1
Add a comment  |
Highly active question. Earn 10 reputation (not counting the association bonus) in order to answer this question. The reputation requirement helps protect this question from spam and non-answer activity.

-1
PHP - htmlspecialchars_decode not working
1
JSON Deserialization - single quote appears as â€™
0
How to handle special entity letters
1
text format in HTML5
-3
How to convert â€™ to apostrophe(') in Java
107
Trouble with UTF-8 characters; what I see is not what I stored
57
Convert latin1 characters on a UTF8 table into UTF8
2
â€™ instead of ' in Natural Reader after encoding with utf-8
1
How to avoid Junk/garbage characters while reading data from multiple languages?
1
Strange characters found in XML file and PowerShell output after exporting from Excel: â€‹
See more linked questions

1491
When are you supposed to use escape instead of encodeURI / encodeURIComponent?
396
Unicode (UTF-8) reading and writing to files in Python
58
Is there any benefit to adding accept-charset="UTF-8" to HTML forms, if the page is already in UTF-8?
2
UTF-8 content type meta tag is slowing down the page loading, why?
4
Setting the character encoding in Day CQ
0
Problem with encoding
0
Utf-8 in PhoneGap Build
0
Question mark( �) displaying instead of each Bengali unicode character. How to fix it?
0
PHP sudden UTF8 encoding issues previously absent. Application not changed